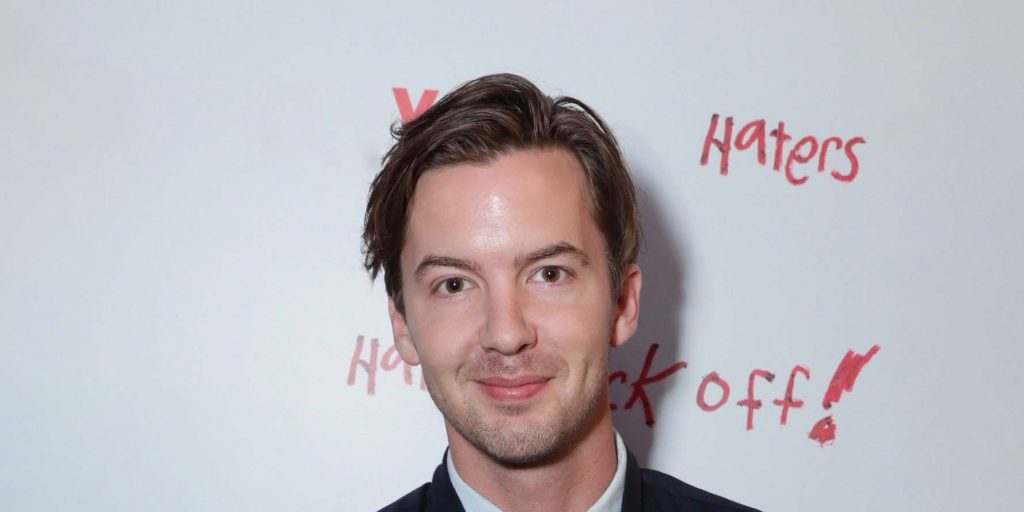 Who is Erik Stocklin?

Erik Flynn Stocklin was born in Freehold, New Jersey USA, on 24 September 1982 – his zodiac sign is Libra, and he holds American nationality. He’s an actor and a music composer, with 25 acting credits to his name, perhaps known best for his portrayal of Patrick in the family comedy series “Haters Back Off!” It aired in 2016 and 2017, was created by five people, including his wife Colleen Ballinger, who also starred in it alongside Francesca Reale and Angela Kinsey. The series follows the life of Miranda Sings, an untalented singer, who believes that she was born famous; it was nominated for four awards, winning three.

Erik was raised in Freehold alongside his brothers Brook D and Chris Stoklin, by their mother Anita, and their father Brian Flynn Stocklin; the boys’ parents prefer to be left out of the media’s attention.

Erik grew up being interested in various activities, as he played soccer for his high school’s team, practiced acting with the school’s drama club, and was also into creative writing, and learning to play the guitar. Upon matriculating in 2001, Erik enrolled at Southern Connecticut State University, and during his time there was a member of the Elm Shakespeare Company, performing in numerous plays with them in New Haven, Connecticut.

In 2007, Erik obtained his Bachelor’s degree in theatre, and then began practicing acting at the Circle in the Square Theatre School in New York City. After a year, he moved to Los Angeles, California, to pursue a career in the film industry.

Erik made his debut TV series appearance in 2010, when cast to play the supporting character Gregg, in the comedy “First Day”. It starred Tracey Fairaway, Elizabeth McLaughlin and Jesse Kove, and follows a girl who relives her first day at school over and over again, until she gets it right.

The following years saw Erik appear in an episode or two of various series, such as the comedy “Krog”, the fantasy horror drama “The Vampire Diaries” and the comedy “Let’s Big Happy”.

In 2013, he was cast to play the supporting character Sam Grey, in the romantic thriller drama “Mistresses”, created by K. J. Steinberg, and which starred Alyssa Milano, Jes Macallan and Rochelle Aytes. It follows the lives of four girlfriends, and the series won a 2013 Seoul International Drama People’s Choice Award for Most Popular Foreign Drama of the Year. In 2014, he made a guest appearance as Noah Gummersall, in the episode “The Geek in the Guck” of the crime comedy drama “Bones”, and the same year saw him star as Perry Whitley, in the crime thriller drama “Stalker”. A couple of Erik’s following roles were in the 2015 episode “Penalty Phase” of the action crime drama “Major Crimes”, the 2016 episode “The Crimson King” of the mystery crime drama “Criminal Minds” and the 2017 episode “The Trip” of the comedy “Girlboss”.

In 2018, he portrayed John Warnock Hinckley Jr., in the episode “The Day Reagan Was Shot” of the action adventure drama “Timeless”, and was then cast to play the supporting character Julian McCaffrey in the critically acclaimed crime fantasy drama “Lucifer”, created by Tom Kapinos, and which has been airing since 2016. It stars Tom Ellis, Lauren German and Lesley-Ann Brandt, and follows Lucifer Morningstar who has left Hell and moved to Los Angeles; the series has won one of the 16 awards for which it has been nominated.

Erik’s most recent TV series role has been his portrayal of Matt in five episodes of the 2021 romantic comedy drama “Good Trouble”. He’s also currently shooting for the upcoming comedy “None of the Above”.

Erik made his debut film appearance in 2011, when cast to play Thomas in the horror “Donner Pass”, and the same year saw him star as Adrian, in the short action comedy “Sick Day”.

The following years saw him play supporting characters in several movies, which failed to attract a lot of attention, such as the 2012 romantic comedy “Nesting”, the 2013 musical “Boyfred”. and the 2013 comedy drama “Grey Sheep”.

He gained recognition in 2018, when he starred alongside Glen Powell and Mekenna Melvin, in the comedy drama “The Bad Guys”, written by Rock Shaink Jr. and Alena Smith, and directed by Carlos Rincones.

It follows a successful filmmaker who has just returned to his hometown. The same year also saw him play Zach, in the Alex Keledjian’s musical science fiction horror “High Voltage”, and in 2019, Erik played Patrick, in the comedy “Miranda Sings Live… Your Welcome”.

Erik’s most recent movie role has been his portrayal of Kevin Mann, in the 2019 comedy “Man Camp”. It follows three men who lost their father at a very young age, and who have now discovered that their mother has a secret fiancé.

As of mid-2021, Erik has recently finished shooting for the upcoming drama “Alive (II)”.

Erik has made a guest appearance in several talk-shows, including “Relax! with Colleen and Erik” in 2020, and “Kinda Murdery” in 2021.

Erik met his future other half Colleen Ballinger in 2016, but the two didn’t start dating until early 2018. They kept the relationship hidden from the media’s attention, but after just half a year of being together, the two exchanged vows in front of a couple of their closest friends and family members. In December of the same year, Colleen gave birth to their son, but have been keeping him away from the media’s attention.

Colleen’s two years Erik’s senior. She was born in Santa Barbara, California, and raised alongside three siblings by their father Tim Ballinger who was a sales manager, and their mother Gwen who was a housewife.

She’s an actress, comedian, YouTuber, writer and singer, probably known best for her YouTube channel, which is today subscribed to by more than 8.6 million people, and numbers more than 1.8 billion views of all her videos combined.

Erik hasn’t mentioned any other women whom he has perhaps been with, so as of June 2021, he’s married to Colleen Ballinger, and has a son with her.

Erik likes to spend his spare time in nature, surrounded by tress and animals. He occasionally goes camping with his wife and son, and usually spends the majority of time in his hammock during these trips.

He’s a cat-lover, and has a pet cat which can be seen featured in a couple of his Instagram pictures.

Erik loves to watch Disney movies, with his favorites being “Wall-E” and the trilogy “How to Train Your Dragon” – he’s recently taken his wife and son to Disneyland in Anaheim, California. He also likes to watch Hollywood movies starring his favorite actors Brad Pitt and Edward Norton, such as “Fight Club”, “Meet Joe Black” and “American History X”.

He’s passionate about travelling, and has been all around the US to shoot for his movies and TV series, while Erik has also been to a couple of European countries, including France and Italy.