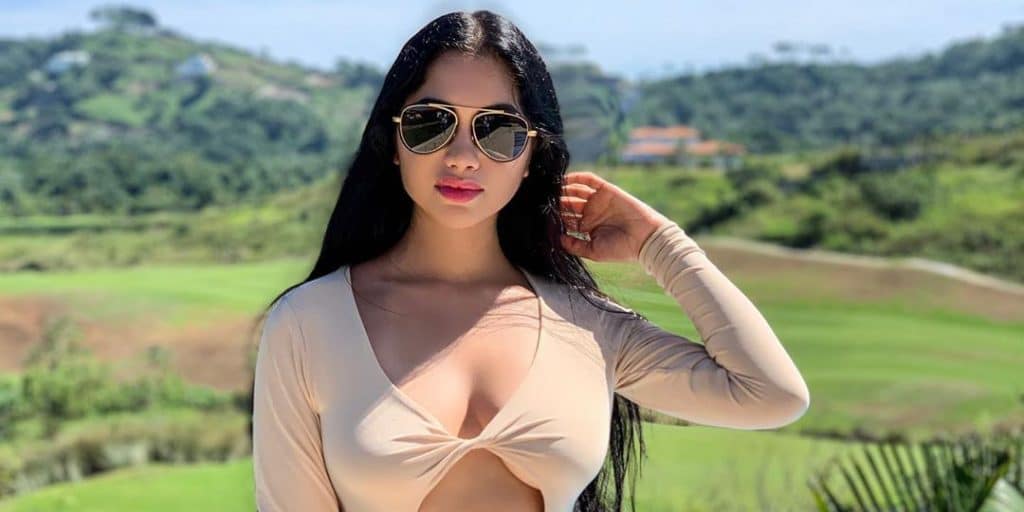 Who is Jailyne Ojeda?

Jailyne Ojeda Ochoa was born in Phoenix, Arizona USA, on 9 January 1998 under the zodiac sign of Capricorn. She’s a 22-year-old model and social media phenomenon, probably best recognized for running her official Instagram account with more than 12 million followers, and her official Facebook page with more than nine million fans. She also runs her self-titled YouTube channel, on which she has amassed over 170,000 subscribers, while her videos have garnered more than five million views to date.

How rich is she, as of now? Jailyne Ojeda Net Worth

As of late 2020, Jailyne Ojeda’s net worth is estimated at over $500,000, acquired through her successful modeling and internet-based career. In addition, she collaborates with various brands, and creates sponsored posts and shares them on her social media accounts, which also increases her fortune.

Jailyne Ojeda spent her early years in her hometown of Phoenix, where she was raised with two younger siblings – a brother named Johnny and a sister named Alexia Merari – by her parents.

The name of her father hasn’t been revealed yet, while the name of her mother is Dulce, who both hail from Los Mochis, Sinaloa, Mexico. Jailyne holds American nationality, and belongs to the mixed ethnic group.

Jailyne became interested in acting and modeling at a very young age – her parents noticed her talent and supported her decision to pursue a related career. So after she finished high school, Jailyne enrolled into Phoenix College, from which she graduated with a degree in Communications, then went to the Barbizon Modelling and Acting School in Florida. She is fluent in both English and Spanish languages.

Career as a Model

Jailyne started pursuing her modeling career when she signed with the South West Modeling agency, and initially worked as a promoter for various lounges and nightclubs located in Arizona. She also signed with Empire Talent and Management, and made appearances in several television advertising commercials, which led her to pursue other opportunities. In 2015, Jailyne featured in the music video for the song “Tus Lagrimas” by Mexican singer Alfredo Olivas, and also appeared in the music video for Nroc Leoj’s song “Chemistry”.

With the rise of social media, Jailyne Ojeda took the opportunity to expand her popularity. She gained huge fame after creating her official Instagram account under the username ‘@jailyneojeda’, immediately starting to share her photos on a daily basis to secure more modeling opportunities. Thanks to her attractive appearance and curved body, Jailyn attracted public attention, and gained a huge number of followers. As time passed, she was also spotted by various companies and brands, and started creating sponsored posts to promote their products and services.

There are a lot of rumors that she has undergone plastic surgery to achieve a perfectly curved body like Kim Kardashian, but she denied it by posting zoomed photos of her body.

In order to expand her influence and promote her modeling career, Jailyne Ojeda created her self-titled YouTube channel. Although it was launched on 16 April 2015, she didn’t released her first video until March 2020, entitled “I FINALLY OPENED UP”. It immediately went viral, which encouraged her to create more videos.

Some of her most popular videos are “Bikini Hula competition Jailyne Ojeda VS Deyana”, “Jailyne Ojeda | HOUSE TOUR and Q&A”, and “Que tanto me conoce mi familia? JUEGO! | Jailyne Ojeda”.

Apart from running her own channel, she has been featured in another YouTube channel, called Fitness Girls.

Jailyne Ojeda also runs another Instagram account, under the username ‘@jailynetravels’, on which she shares photos from exotic destinations she’s visited.

She is also active on her official Facebook page, and has an account on the app TikTok. Furthermore, Jailyn developed her own mobile application called ‘JLean Store’, which is available in both App Store and Google Play Store.

The brunette beauty is very secretive about her personal life. Nonetheless, she once mentioned that she would like to marry and have two children, a boy and a girl. She is currently single.

In her spare time, she enjoys traveling around the globe and taking photographs.

Her hobbies also include singing and dancing.

She is also known for being an avid animal lover.

She is passionate about health and fitness.