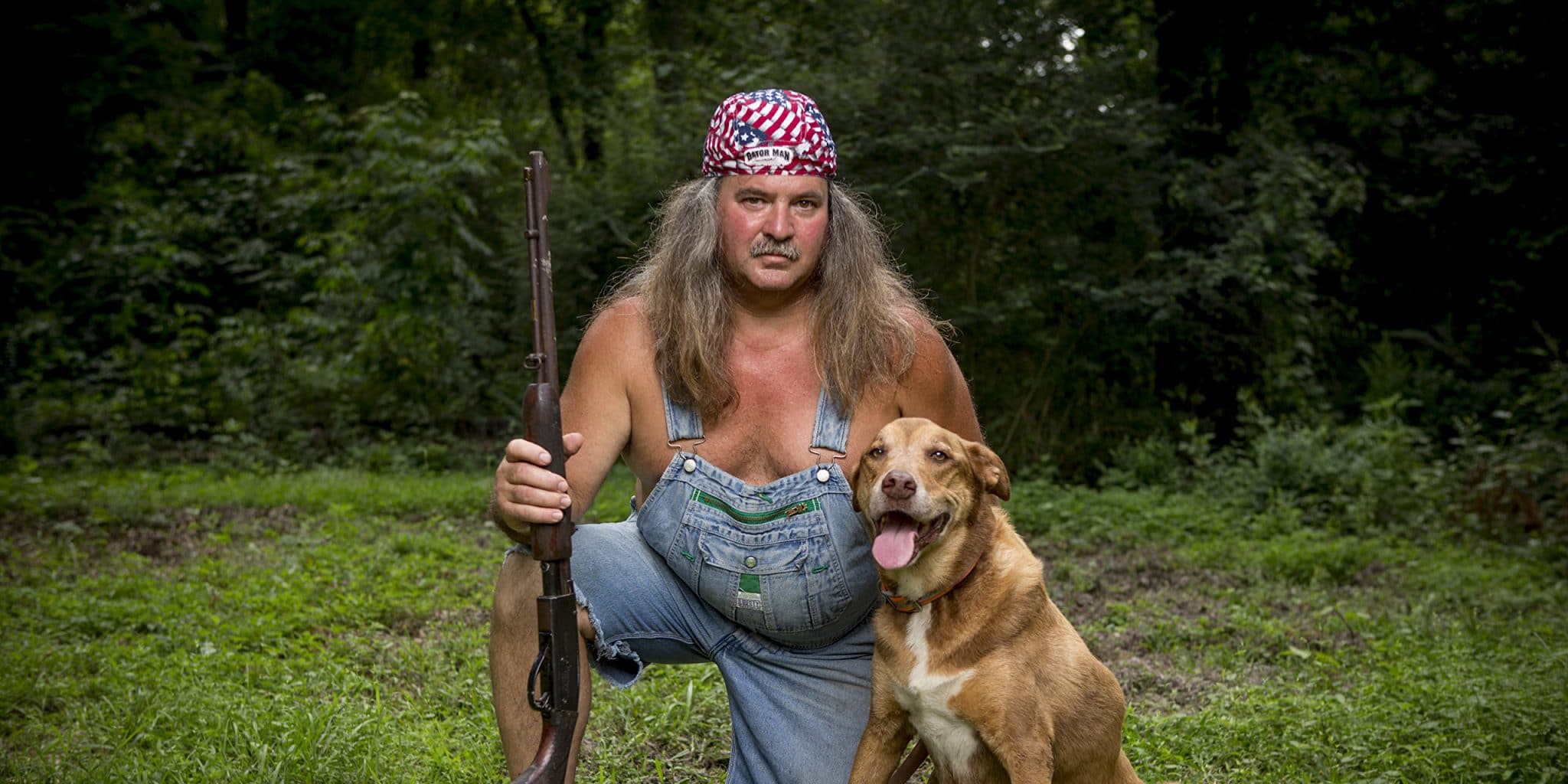 What happened to Tyler The Dog in “Swamp People”?

History Channel scored a big hit with the reality television series “Swamp People,” which starred the alligator hunters of Louisiana’s Atchafalaya Basin, the largest swamp and wetland in the US. It premiered in August 2010 with over three million people tuning in, and so far 12 seasons have been aired. It’s not only the hunters such as the “King of the Swamp” Troy Landry and Gator Queen Liz who’ve captured the interest of the viewers, but also Tyler the dog, Bruce Mitchell’s hunting partner, although he’s mostly there as a companion to the veteran hunter.

Bruce Mitchell was born on 13 July 1960 ,and raised along with his four younger siblings in Ponchatoula, Louisiana, which is known for strawberry farming, but started hunting alligators with his grandfather when he was just a little kid. In 1980 he married Janet Kliebert, whom he met when they were in junior high, and started working at her father’s Kliebert’s Alligator and Turtle Farm.

The couple moved into the farm’s property after that, and helped run the business together with her dad. They have two daughters named Lorraine Michelle and Janice Marie.

Tyler, also fondly called Ty or Tyler Boo, was born in 2001, and was from a local shelter, given as a gift Janice, the youngest daughter of Bruce. Bruce formed a connection with him, and when Tyler was just four months old, Bruce started bringing the puppy on his 20-foot “Go Devil” Surface Drive Aluminum boat while he was hunting alligators. They were together all the time, and he jokingly said that they talked to each other, but not in front of other people.

While working at the farm, Bruce was scouted by the A&E network for a History Channel documentary, and that was how he became connected to “Swamp People.”

Alligators can grow up to 14 feet and weigh a thousand pounds. They’re quick, agile, can run up to 35 miles per hour, and have extremely powerful jaws. They are usually wary of humans, except when protecting their nest or when cornered. If left unchecked, the bayou would be overrun by ‘gators, they would run out of food, and move closer to people’s homes. Licensed hunters cull their population only during the 30-day hunting season, which officially starts on the first Wednesday in September on the west zone. They’re issued a limited number of tags that they should place on every gator hooked and killed. Bruce and the other hunters have the potential to earn a half-year income in just one month, as the skin is considered exotic leather, and bought by tanneries for the production of bags, shoes and other products. The meat is sold as well for food.

The TV series follows the hunters as they fill their tags before the hunting season is over. It also gives the viewers a glimpse of family interactions, and fellow hunters or neighbors helping each other out.

Bruce Mitchell is a local legend who hunted alone in the bayous between Lake Pontchartrain and Lake Maurepas, with only Tyler to accompany him as his first mate; the dog was out the door at five o’clock in the morning, ready to go. Bruce is easily recognizable as he wore Liberty overalls, camouflage crocs, and the American flag head wrap.

Tyler wasn’t there only to keep the captain of the boat company. As Bruce hunted solo, there were times he would almost drive past the line that he’d set up, if not for Tyler alerting him of the fact. Bruce could tell by the way Tyler lifted his head and started sniffing that something’s out there like a ‘gator, as he had a good nose on him.

Hunting gator is quite difficult not to mention dangerous, as it would fight hard to escape while being reeled in using the line that was attached to the baited hook. Its head should be out of the water to have a clear shot of its most vulnerable part, which is at the back of its head. Bruce had to do it all on his own: holding the line in one hand and shooting the ‘gator with the other. While he’s trying to control the gator, he would constantly warn Tyler not to get too close. Once dead, the next step is to haul his catch into the boat and tag it. As a precaution, Bruce always carries a small gun in his front pocket in case things go wrong, and he also taped the ‘gator’s jaws shut in case it’s still alive before hauling it in, using a winch that he built that could pull or drag a ton. The two had a tradition after a successful catch – Tyler would lick the head of the gator once it was inside the boat.

Bruce would then feed the dog his favorite treat, a Zebra cake; Tyler was only six or seven weeks old when he started eating them.

Every hunter fears falling into the water, especially when there’s a gator a few feet away; it’s a possibility when fighting a big one. When Bruce caught a 750-pound alligator, he fell as he was struggling to control it. Interestingly, while he was wrestling with the gator, he’s more worried about Tyler coming to his rescue than the dangerous predicament he’s in. Fortunately, he was able to shoot the gator as he managed to sit on top of it, with his other hand keeping the jaws shut.

He was aware of the danger to Tyler whenever they were out hunting and he sometimes had to scold Tyler as he didn’t want his dog to be within easy reach of the gator’s jaws.

However, there was a time when Tyler didn’t obey him, and even stepped out of the boat to go into the marsh, and got lost. It was hard to track sound in the swamp, so even if he could hear the dog barking in the bushes, he couldn’t figure out exactly where it was coming from. Bruce believed that Tyler’s busy chasing after a deer, and it was nerve-wracking when it suddenly became quiet. He was worried sick, and continued calling and whistling for his dog all through the night until morning, never giving up on his search as he didn’t want to go home without Tyler. More than 24 hours had passed when he finally heard Tyler’s bark again, and the dog jumped back into his boat. At home, his family celebrated Tyler’s return, and Bruce cooked ‘gator nuggets and ‘gator sausage and beans. They even played around as he had to chase Tyler who had snatched his bandana hat.

Bruce later hired a kid named Nick who wanted to learn ‘gator hunting from him. They went hunting in an area the locals called the Devil’s Swamp, home to a giant ‘gator nicknamed “Lucifer.” Hunters avoided this place, based on Cajun superstitions that bad things happen there. It was hard to navigate with trees floating around, knocked down during a hurricane. It all went well in the end, as they finally caught Lucifer after six hours in that swamp. They did have a scare though, when Tyler fell from the boat as it hit one of the trees ;n the water while they were looking for their lines, but fortunately the dog was unharmed.

During the third season of the show, Bruce hired Ron, a sniper and Iraq war veteran. As they worked together to fill all his tags, he couldn’t help but worry about Tyler. He recalled the time when the dog was running and then would pass out, which scared Bruce to death.

When he took Tyler to the vet, they said the dog had congestive heart failure, and that there was nothing more they could do for him. It was evident that Bruce was more focused on Tyler than hunting alligators during that time. When Tyler didn’t perform the ritual of licking the gator’s head, Bruce knew the end was near for his dog. He prepared pasta jambalaya at home for Tyler and said, ‘If he’s going out, we gonna let him go out in style. Let him have what he wants.’ Tyler got better, but Bruce didn’t tag out that hunting season, and this meant he lost thousands of dollars, and his pride took a dent.

Tyler was up and about the following season, and even eager to hunt despite the rain. However, he fell from the boat again, as he was standing too close to the edge of the bow – Bruce had to quickly lift the propeller so it wouldn’t hit the dog.

The investi(gators) are on the case! 🔍 Joey and Zak are called in to take care of a 🐊 problem during this Thursday's splashy episode💦 #SwampPeople pic.twitter.com/cSNRQPBiDn

Luckily they found him and Ron was able to pull Tyler out of the water; they called it a day after that. Before the hunting season ended, they were determined to fill their tags. However, Tyler wasn’t looking good and then he threw up. With only one tag remaining, Bruce decided to bring his dog home. Before he could do that, Ron spotted an 11-foot gator caught in one of their lines, so they went for it. When Ron couldn’t see the ‘kill spot’ because there were lots of branches blocking the way, Bruce went out of the boat and walked onto land to get the gator into position using the line. However, the rifle jammed, and as the gator started making his way to Bruce, Tyler stepped out of the boat as if sensing the danger to Bruce. The gator then headed for the dog so Bruce, in panic mode, put his weight on the reptile and shot it with his ‘just in case’ gun.

In the next hunting season, Bruce forced Tyler into retirement, as the latter was getting too old to be his hunting partner, but he did bring him out for his last day on the swamp. He later gave the dog a retirement party, complete with a big Zebra cake, with the words, ‘To The Best ‘Gator Dog Ever, Tyler,’ written on it. Bruce said Tyler’s a member of the family, like a son to him and added, ‘He’s just part of me…I just don’t know what I’d do without him.’

After three years of battling congestive heart failure, Tyler died at 13, on 28 April 2014. On Bruce’s Facebook page, it was posted: ‘We are sad to let all Bruce and Tyler’s fans know that Tyler died this morning around 1:10 am. He ate his last zebra cake.’ It wasn’t only Bruce’s family and friends who mourned his death but also the viewers who had become used to seeing him on the show.

That same year, while he was on a “meet and greet” event and signing autographs, EMTs were called in when a woman sobbed and collapsed, after he told her that Tyler was hunting ‘gators in heaven. In April 2019, Tyler’s Tribute page on Facebook was made, and fans expressed their sadness over losing him and how they miss him.

Since the dog died, Bruce has been having coffee every morning by Tyler’s gravesite in his yard, so he wouldn’t forget him. Later, Ron, who stayed with Bruce while they were hunting together, surprised him with a new puppy that they could bring with them to the boat, but Bruce, looking at it, said, ‘I’m just not ready for that. Tyler ain’t been gone for ‘bout a year. It’s like losing my kids.’ He had to compose himself after that but agreed to let Ron keep the pup in the house.

Bruce continued to appear in “Swamp People” until season nine, and then took a break to spend time with his family, and only returned in season 12.

Lisa Kelly From Ice Road Truckers – What Is She Doing Now?