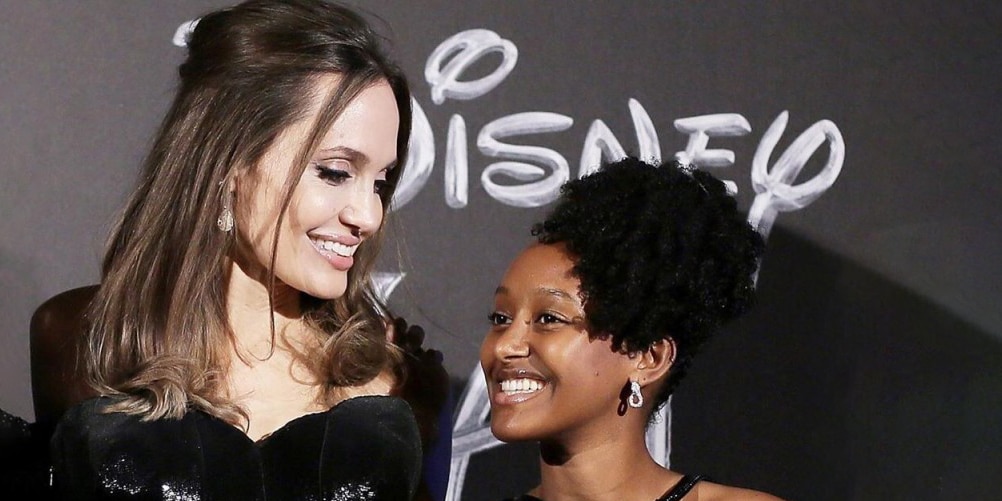 Where is Zahara Marley Jolie-Pitt today? Net Worth, Parents

Who is Zahara Marley Jolie-Pitt?

Zahara Marley Jolie-Pitt was born as Yemasrech on 8 January 2005 under the zodiac sign of Capricorn in Awasa, Ethiopia. She is a 16-year-old celebrity child, recognized for being the adoptive daughter of Hollywood stars Brad Pitt and Angelina Jolie.

How rich is she, as of now? Zahara Marley Jolie-Pitt Net Worth

Zahara Marley Jolie-Pitt’s career is yet to come, so she still presumably enjoys the impressive fortune of her famous parents, both of whom are among the highest-paid actors in the film industry. As of early 2021, her father Brad Pitt has a net worth of over $300 million, while her mother Angelina Jolie has an estimated net worth at over $120 million.

On 6 July 2005, Zahara Marley Jolie-Pitt was adopted by Angelina Jolie from the Wide Horizons For Children orphanage in Addis Ababa, Ethiopia. At the time, she was only six months old baby.

The identity of her biological father is unknown, on the other hand, Angelina was told that her biological mother, Mentewab Dawit Lebiso, passed away from AIDS just three days after delivering her; in fact, she was still alive, and had named her daughter Yemasrech, which means ‘good news’ in the Amharic language. Since she struggled to earn enough money to make ends meet, Mentewabe ran away from home and left Zahara with her mother Almaz Blfnhe. Since they lived in very poor conditions, Zahara was put up for adoption. Her birth mother later appeared in the media and said that she was forced to put her up for adoption, because she was conceived as a result of a brutal rape attack. In the following year, Brad Pitt adopted her legally as well, changing her surname to Jolie-Pitt.

Brad Pitt and Angelina Jolie met each other on the set of the 2005 film “Mr. & Mrs Smith”. They apparently fell in love almost at first sight, but there was no infidelity since he was married to Jennifer Aniston at the time. In early 2005, Jennifer filed for a divorce, which was finalized by the end of the year. Brad and Angelina became romantically involved, nonetheless, they didn’t go public with their relationship until January 2006, when Angelina confirmed her pregnancy with his child. They became one of the most glamourous couples in Hollywood, being nicknamed ‘Brangelina’ by the entertainment media. After seven years of dating, the couple announced their engagement in April 2012, and eventually tied the knot at a private wedding ceremony held on 23 August 2014, at their estate Château Miraval in Correns, France. Unfortunately, their actual marriage was short-lived, since they separated in September 2016. Several days later, Angelina filed for divorce citing irreconcilable differences.

Zahara Marley Jolie-Pitt gained worldwide fame as the adoptive daughter of Hollywood celebrities, making her debut appearance in the TV series “VH1’s All Access” (2006), along with other celebrity children.

She also landed a small role in the 2014 dark fantasy adventure film “Maleficent”, starring Angelina Jolie; however, it went uncredited. She then provided her voice to the character Meng Meng in the computer-animated comedy film “Kung Fu Panda 3” in 2016. Since then, Zahara has been inactive in the world of acting. It’s still unknown whether she will follow in her parents’ footsteps or not.

Who Is Her Father? Brad Pitt Short Wiki/Bio

William Bradley ‘Brad’ Pitt was born on 18 December 1963 under the zodiac sign of Sagittarius, in Shawnee, Oklahoma USA, to William Alvin Pitt who was the proprietor of a trucking company, and Jane Etta who was a school counselor. He has a younger brother, Douglas Mitchell, and a younger sister, Julie Neal. He spent one part of his childhood in his hometown, until the family moved to Springfield, Missouri, where he went to Kickapoo High School.

Upon matriculation, he enrolled into the University of Missouri, where he studied Journalism. Two weeks short of completing the course for a degree, he left college and moved to Los Angeles, where he took acting classes.

Brad Pitt made his film debut in a small role in the 1987 comedy film “Hunk”, but it went uncredited, while his TV debut came later that year when he was cast as Randy in the CBS prime time soap opera “Dallas” (1987-1988). He played his first major role in the 1989 black comedy slasher film “Cutting Glass”, after which he gained recognition for starring in the roles of J.D. in the 1991 female buddy road film “Thelma & Louise”, and Paul Maclean in the Oscar-winning 1992 drama film “A River Runs Through It”, directed by Robert Redford.

Brad’s next significant roles came in 1994, when he portrayed Louis de Pointe du Lac in Neil Jordan’s gothic horror film “Interview With The Vampire”, and featured as Tristan in the epic drama film “Legends Of The Fall”, which earned him his first Golden Globe Award nomination for Best Actor.

In 1995, Brad Pitt landed the role of Mills in David Fincher’s crime thriller film “Se7en”, alongside Morgan Freeman and Kevin Spacey, and played Jeffrey Goines in the sci-fi film “12 Monkeys”, for which he earned his first Academy Award nomination for Best Supporting Actor, and won the Golden Globe Award in the same category.

His next major role came two years later, when he featured as Heinrich Harrer in the biographical war drama film “Seven Years In Tibet”, followed by his portrayals of the title role in the romantic fantasy film “Meet Joe Black” (1998) next to Anthony Hopkins, and Tyler Durden in the apocalyptic cult film “Fight Club” (1999).

In 2001, Brad Pitt took the role of Rusty Ryan in the commercially successful heist comedy film “Ocean’s Eleven”, directed by Steven Soderbergh. He would later reprise the role in its sequels, “Ocean’s Twelve” (2004) and “Ocean’s Thirteen” (2007), next to such actors as George Clooney, Andy Garcia and Matt Damon.

Concurrently, he portrayed Achilles in the epic historical war film “Troy” (2004), which became one of the highest-grossing film titles of the year, and played John Smith in the action comedy film “Mr. & Mrs Smith” (2005), which was also a box office success. In 2006, he produced Martin Scorsese’s crime thriller film “The Departed”, which won an Academy Award for Best Picture, then for his appearance in the title role in the 2008 fantasy romantic drama film “The Curious Case Of Benjamin Button”, he earned an Academy Award nomination for Best Actor.

In 2011, Brad Pitt attracted critical acclaim for producing and landing the roles of Mr. O’Brien in the epic experimental drama film “The Tree Of Life”, and Billy Beane in the biographical sports drama film “Moneyball”, both of which earned an Academy Award nomination for Best Picture; for his performance in the latter, he was nominatied for an Academy Award for Best Actor.

Many of #BradPitt's ’90s outfits still resonate with the menswear today pic.twitter.com/JSO3vgn9XJ

In 2013, he featured as Gerry Lane in the highest-grossing zombie film of all time, “World War Z”, and later that year, Brad produced and portrayed Bass in the period drama film “12 Years A Slave”, for which he won an Academy Award for Best Picture. He was nominated for the same award for producing the 2015 biographical comedy-drama film “The Big Short”, in which he played Ben Rickert. Most recently, he starred as Cliff Booth in Quentin Tarantino’s film “Once Upon A Time In Hollywood” (2019), along with Leonardo DiCaprio, for which he won an Academy Award for Best Supporting Actor, as well as Golden Globe Award in the same category.

Who Is Her Mother? Angelina Jolie Short Wiki/Bio

She has a brother, named James Haven, who is also an actor. Following the divorce of her parents in 1976, she and her brother lived with their mother. Angelina became interested in acting very early, and even made an appearance in her father’s film “Lookin’ To Get Out” (1982). At the age of six, she moved with her mother and her mother’s boyfriend to Palisades, New York, but they returned to Los Angeles five years later. She then enrolled in the Lee Strasberg Theatre Institute, where she performed in several stage productions, then later undertook film studies at New York University, followed by joining the Met Theatre Group in Los Angeles.

Angelina Jolie started her acting career at the age of 16. She initially appeared in her brother’s student film and several music videos, including Lenny Kravitz’s “Stand By My Woman” and Meat Loaf’s “Rock ‘n’ Roll Dreams Come Through”.

In 2001, Angelina gained further international popularity after landing the role of Lara Croft in the action film “Lara Croft: Tomb Raider”, which is based on the “Tomb Raider” video game series, and would later reprise the role in its 2003 sequel, entitled “Lara Croft: Tomb Raider – The Cradle Of Life”. Her next significant role came two years later, when she played Jane Smith in the box office hit, “Mr. & Mrs Smith” (2005), opposite Brad Pitt. It was followed by her portrayals of Mariane in the 2007 drama film “A Mighty Heart”, and Christine Collins in Clint Eastwood’s 2008 mystery crime drama film “Changeling”, which earned her an Academy Award nomination for Best Actress as well as a Golden Globe Award nomination in the same category. In the same year, she lent her voice to Tigress in the animated film “Kung Fu Panda”, which she would reprise in its sequels “Kung Fu Panda 2” (2011) and “Kung Fu Panda 3” (2016). Meantime she played Evelyn Salt in the internationally successful action thriller film “Salt” in 2010.

she is the most cutest thing in the world 😭❤️ pic.twitter.com/8LTV7cVeq2

In 2011, Angelina both produced and made her debut as a director with the romantic drama war film “In The Land Of Blood And Honey”. Her biggest commercial success came when she appeared in the title role of the 2014 dark fantasy adventure film “Maleficent”, which she would reprise in its 2019 sequel, “Maleficent: Mistress Of Evil”. She also directed the 2014 war film “Unbroken”, and the 2017 biographical historical thriller film “First They Killed My Father”. Most recently, she featured as Rose Littleton in the 2020 fantasy drama film “Come Away”.

Angelina Jolie is also known for her humanitarian work, for which she was rewarded with the Jean Hersholt Humanitarian Award at the 2013 Academy Awards. She was also honored with Dame Commander of the Order of St Michael and St George (DCMG). She is best recognized for her advocacy on behalf of refugees, and serves as a Special Envoy to the United Nations High Commissioner for Refugees (UNHCR).