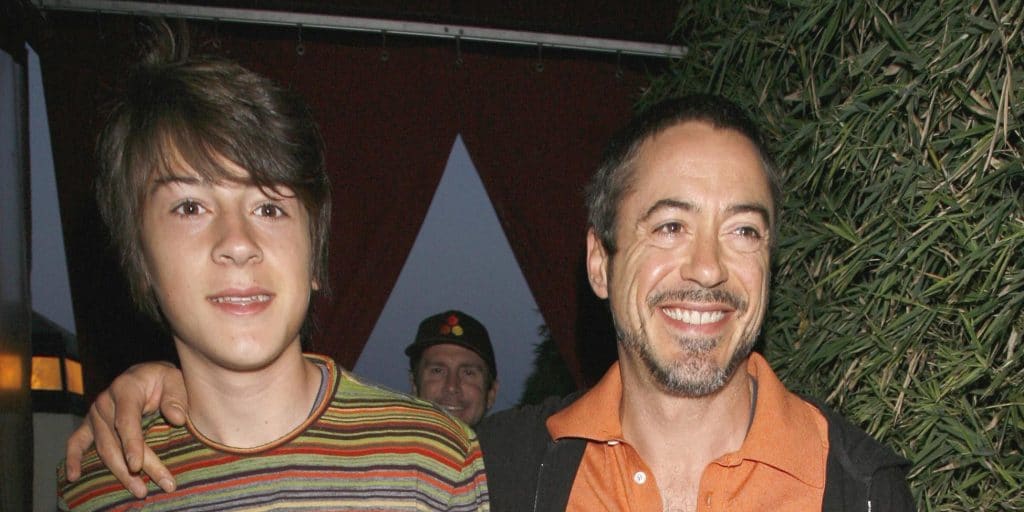 Avri Roel Downey was born in Los Angeles, California USA, on 4 November 2014 – her zodiac sign is Scorpio and she holds American nationality. Avri is only known for being the daughter of famous American actor and film producer Robert Downey Jr., and his second wife, American film producer Susan Levin.

Robert and Susan met back in 2003 while working together on the supernatural psychological horror movie “Gothika” – Susan said ‘no’ two times when Robert asked her out, because she believed that any romance would only last until the shooting was over. However, the two still started dating, and in August 2005, they married in a Jewish ceremony, while Robert tattooed ‘Suzie Q’ on his bicep to show how much Susan means to him.

Susan gave birth to Avri’s older brother Exton Elias in February 2012 and the family of four has since Avri’s birth been leading a seemingly happy life together.

Before meeting Susan, Robert was married to the American singer, model and actress Deborah Falconer – they exchanged vows on 29 May 1992 after having dated for just 42 days. The two welcomed their son Indio Falconer Downey in September 1993, but because of his drug addiction, Deborah and Indio left Robert in 2001, although the divorce was only finalized on 26 April 2004. Robert was once in a relationship with the famous American actress and film producer Sarah Jessica Parker, who also left him because of his drug addiction.

Who is Robert Downey Jr.?

Robert John Downey Jr. was born in New York City, USA on 4 April 1965 – his zodiac sign is Aries and he holds American nationality.

He might be known best for his portrayal of Iron Man (Tony Stark) in 10 movies created by Marvel Cinematic Universe – he is also known for having been one of the highest-paid actors from 2013 to 2015, according to the American business magazine “Forbes”.

Robert was raised alongside his older sister in Greenwich Village, New York City, by their father Robert Downey Sr. who was an actor and a moviemaker, and their mother Elsie Ann who was an actress. Robert Jr.’s father was a drug addict, who allowed his son to smoke marijuana when he was only six years old – this led Robert to also start drinking and smoking weed nearly every night.

He was five when he launched his acting career, mostly making cameo appearances in his father’s movies, then after turning 10, Robert was sent to England to study classical ballet.

Upon returning to New York, he studied at Stagedoor Manor Performing Arts Training Center, and at the age of 13 when his parents divorced, he moved in with his father in California, and enrolled at Santa Monica High School, from which he dropped out when he was 17, and moved to New York to pursue a career as an actor.

The first two roles that helped him gain recognition were in the 1985 drama movie “Tuff Turf”, and the teen science fiction comedy movie “Weird Science” in the same year He portrayed his first lead character in the 1987 romantic comedy movie “The Pick-up Artist”, and the following years appeared in numerous movies, including “Chances Are”, “Air America” and “Soapdish”, before playing Charlie Chaplin in the 1992 biographical comedy film “Chaplin”, which won him a nomination for an Academy Award for Best Actor, but he lost-out to Al Pacino’s portrayal of Lieutenant Colonel Frank Slade in the evergreen drama film “Scent of a Woman”.

In the late ‘90s, Robert’s drug problems surfaced and he was arrested on multiple occasions for possession of marijuana, heroin and cocaine – he joined several rehab programs, but none really helped. He was put on a three-year probation in 1996, then after failing to take a court-ordered drug test in 1997, Robert was sent to jail for half a year – he failed to take another test in 1999, and was sentenced to three years in prison, but was released after having served one year, and only seven days later started playing a supporting character in the legal comedy series “Ally McBeal” – for his performance, Robert won a Golden Globe Award for Best Supporting Actor in a mini-series or television film, and was nominated for an Emmy Award for Outstanding Supporting Actor in a Comedy Series.

Robert was then arrested again, and fired from “Ally McBeal” when he received three years on probation, and had to enter a drug rehab program.

In 2001, Robert finally decided he was done with drugs, and in 2003 starred in the musical crime comedy movie “The Singing Detective”, which was only made possible because the famous actor and Robert’s friend Mel Gibson paid for Robert’s insurance bond. He went on to appear in many movies, such as “Good Night”, “A Scanner Darkly” and “The Shaggy Dog”, and on 23 November 2004, to everyone’s surprise, Robert launched his singing career with the release of his first and only album “The Futurist”.

He became famous worldwide after his portrayal of Tony Stark in the 2008 superhero film “Iron Man”, which grossed around $585 million worldwide, then starred alongside Ben Stiller in the action comedy movie “Tropic Thunder”. Some of the following movies he appeared in were “The Soloist”, “Sherlock Holmes” and “Iron Man 2”, while two of his most recent and notable roles were in the 2018 and 2019 superhero movies “Avengers: Infinity War”, and “Avengers: Endgame”, respectively.

Robert is interested in politics, and in 2016 appeared in an anti-Trump commercial while he has also been encouraging people to vote claiming that each vote counts.

Who is Susan Levin?

Susan Nicole Downey was born in Schaumburg, Illinois USA, on 6 November 1973 – her zodiac sign is Scorpio and she holds American nationality.

She might be known best as the wife of Robert Downey Jr., as well as for running the production house Team Downey, which they launched together.

The year 2002 saw Susan co-produce the supernatural horror movie “Ghost Ship”, while the following year she co-produced the action movie “Cradle 2 the Grave” – some of the movies she worked on in the following years were “Kiss Kiss Bang Bang”, “The Brave One” and “RocknRolla”. In 2009, Susan collaborated with her husband on the critically acclaimed movie “Sherlock Holmes” as he starred in it and the film was a huge hit winning Robert a Golden Globe Award for Best Actor – Motion Picture Musical or Comedy.

They founded their company Team Downey in June 2010, and their first movie was the heist thriller “Yucatan” – in 2014 they also produced the family film “The Judge”, which starred Robert. Two of Susan’s most recent works have been on two 2020 movies – “Dolittle” (producer – starring Robert) and “Perry Mason” (executive producer).