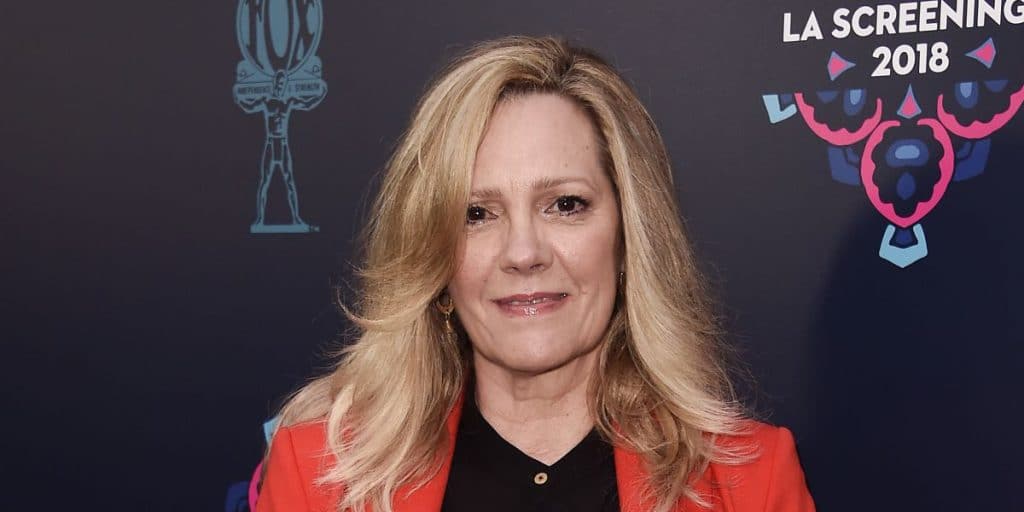 All About Wendy Schaal: Net Worth, Husband, Family, Children

Who is Wendy Schaal?

Wendy Joy Schaal was born in Chicago, Illinois USA, on 2 July 1954 – her zodiac sign is Cancer and she holds American nationality. She is an actress, who is perhaps still known best for her portrayal of Bonnie Rumsfield in the 1989 mystery thriller comedy movie “The ‘Burbs”, written by Dana Olsen, directed by Joe Dante and which starred Tom Hanks, Bruce Dern and Carrie Fisher. It follows several neighbors who believe that the new family who have just moved into the neighborhood are members of a satanic cult. The movie was nominated for one award.

Wendy’s parents divorced when she was five, and she thus moved to live in Newport Beach in California with her mother. Aged nine, she returned to Chicago to study acting, then after two years returned to California. Her father remarried to the famous actress Valerie Kathryn Harper, and Wendy moved to live with them in New York in 1968, while she eventually settled in Los Angeles, California with her mother, and upon matriculating from a local high school in 1972, enrolled at Los Angeles City College, graduating with a Bachelor of Arts degree in 1976.

Wendy has appeared in around 70 movies and TV series, and we are about to mention some of her most notable performances in this article.

She made her debut TV series appearance in the 1976 episode “Sadie Hawkins Day” of the comedy “Welcome Back, Kotter”, and the following years saw her appear in an episode or two of various series, such as the comedy “Rhoda”, another comedy “Fish”, and the romantic family drama “Little House on the Prairie”.

She gained recognition in 1980 when cast to portray the supporting character Vicki Allen in the comedy “It’s a Living”, which starred Gail Edwards, Barrie Youngfellow and Paul Kreppel, and which follows several waitresses who are working at a restaurant located on the highest floor of a skyscraper. The following year saw Wendy portray three characters in 19 episodes of the adventure comedy “Fantasy Island”, then in 1983 she was cast to play Bonnie Hornback in the comedy “AfterMASH”, but which attracted little attention and gained mixed reviews.

She continued on making guest appearances in more than 10 series, until in 1989 cast to star as Liz Dooley in the fantasy comedy “Nearly Departed”, and then as Debbie Lapidus in the 1990 comedy “Good Grief”. The following years saw Wendy appear in series such as the drama “Rebel Highway”, the comedy “Hope & Gloria” and the mystery thriller fantasy “Beyond Belief: Fact or Fiction”.

Between 2013 and 2018, Wendy voiced three characters in three episodes of the hit animated comedy “Family Guy”, created by David Zuckerman and Seth MacFarlane, while Seth also starred in it alongside Alex Borstein and Seth Green. It follows a dysfunctional family living in Rhode Island – the series has been airing since 1999 and has won 37 awards including nine Primetime Emmys, while being nominated for 101 other awards.

Wendy’s most recent role in a TV series has been in the animated comedy “American Dad!”, in which she has been voicing various characters in all 301 episodes of the series since 2005. It follows a CIA Agent who is keeping America safe, and at the same time taking care of his family. The series has won one award and has been nominated for 31 others, including four Primetime Emmys.

Wendy made her debut film appearance in the 1976 biographical musical drama “Bound for Glory”, which starred David Carradine, Ronny Cox and Melinda Dillon, and follows the early life of folk singer Woody Guthrie. The movie was a huge hit, winning six awards including two Oscars, while it was nominated for 11 other awards.

Some of Wendy’s following roles were in the 1977 comedy “Record City”, the 1984 comedy “Where the Boys Are”, and the 1985 science fiction horror “Creature”. The year 1987 saw her play a supporting character in the hit action adventure comedy “Innerspace”, which starred Meg Ryan, Dennis Quaid and Martin Short, and follows a test pilot who has been miniaturized and injected into a man by mistake. The film won two awards including an Oscar, and was nominated for four other awards. Wendy went on to appear in a couple of critically acclaimed movies, including the 1994 family comedy “My Girl 2”, and the 1998 action adventure comedy “Small Soldiers”.

Her most recent role in a movie was in 2006, when she was cast to play the supporting character Senator Tillman in the romantic drama “Loving Annabelle”, which starred Erin Kelly and Diane Gaidry, and follows Annabelle who enrolls at her third high school after being expelled from two.

Annabelle’s a lesbian who is open about it, and is attracted to her professor Simone. The film won 10 awards.

Wendy worked as a production assistant on the 1996 movies “The Toy Shop” and “Journey to the Center of the Earth”, as well as on the 1997 film “The Count of Monte Cristo”.

She was the automated dialogue replacement voice for the 1997 film “That Old Feeling”, and the 1999 movie “The Story of Us”.

Wendy has been credited with singing three songs in the episodes “300”, “An Irish Goodbye” and “Stan of Arabia: Part 2” of the series “American Dad!”

Wendy has made a guest appearance in several talk-shows such as “Breakaway”, “The Tonight Show Starring Johnny Carson”, and “Good Day L. A.”.

Wendy is quite secretive when it comes to her love life, but it’s known that she was once married – she exchanged vows with Stephen Michael Schwartz on 4 September 1977 when she was 23. Neither of the two have spoken about how and where they met, but it’s widely believed that they attended the same college. A year following their wedding, Wendy gave birth to their son Adam Victor Schwartz, but on 11 October 1987, she and Stephen divorced for unknown reasons.

Wendy hasn’t spoken about any other men she has perhaps been with, and as of March 2021, she is single, was once married and has a son.

Wendy’s favorite season is summer – she enjoyed spending her spare time at the beach during her 20s and 30s when she was considered as one of the most attractive actresses.

She was also physically active back then, as she worked out at the gym and ran nearly every morning, while Wendy also played beach sports with her friends, such as volleyball and soccer.

She’s an avid traveler, and has been all around the US visiting nearly every state, and has also travelled overseas to France and Poland, among other countries.

Wendy’s a cat-lover, and has two pet cats.

She has her own favorite actors and actresses, some of whom are Al Pacino, Meryl Streep and Angelina Jolie – a couple of her favorite movies are “Scent of a Woman”, “Kramer vs. Kramer” and “The Devil Wears Prada”.

As of March 2021, her net worth has been estimated at over $6 million.