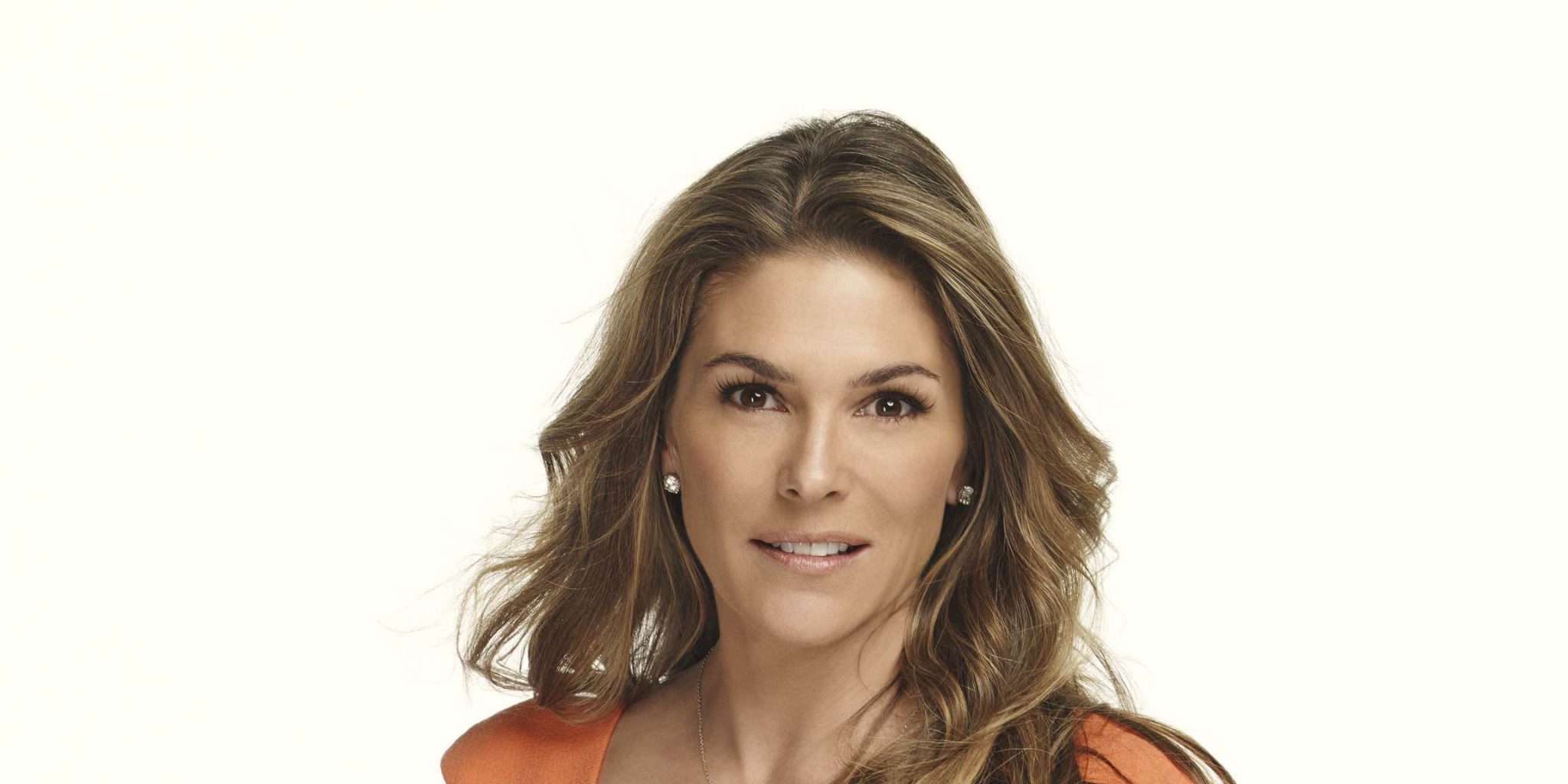 Jean Paige Turco was born in Boston, Massachusetts USA, on 17 May 1965 – her zodiac sign is Taurus and she holds American nationality. She is an actress who is perhaps still known best for her portrayal of April O’Neil, one of the lead characters in the 1991 action adventure comedy movie “Teenage Mutant Ninja Turtles II: The Secret of the Ooze” – her debut film appearance – which also starred David Warner and Michelan Sisti, and follows the ninja turtles fighting their old nemesis The Shredder. The movie received mixed to positive reviews, and won two awards out of three it was nominated for. Paige reprised her role in the 1993 “Teenage Mutant Ninja Turtles III: The Secret of the Ooze”.

Paige is also recognized as the wife of famous Irish actor Jason O’Mara.

Paige spent only a year in Boston before the family moved to Springfield in Massachusetts. She was raised as an only child by her mother Joyce Jean and her father David Vincent Turco.

She grew up practicing dancing, and dreamed about becoming a famous ballerina. She studied at the Walnut Hill School, and performed for the first time as a ballerina at the New England Dance Conservatory, followed by performances with the Amherst Ballet Theatre Company and the Western Massachusetts Ballet Company. Paige eventually suffered an ankle injury, and had to give up on the idea of becoming a professional ballet dancer. Upon matriculating in 1983, she enrolled at Bay Path College from which she graduated with a Bachelor of Arts degree in drama in 1987, and she then continued her education at the University of Connecticut, from which she obtained her Master’s degree.

Paige made her debut TV series appearance in 1987, when cast to portray Dinah Morgan Marler, one of the supporting characters in the critically acclaimed romantic drama “Guiding Light”, which aired 2570 episodes from 1952 to 2009, while Paige played her role for around two years.

She gained recognition in 1989, with her portrayal of Melanie ‘Lanie’ Cortlandt Rampal in the romantic mystery “All My Children”, which was also a long-running series of more than 4,000 episodes aired from 1970 to 2011. The year 1994 saw her play the supporting character Terry Mears in the drama “Winnetka Road”, but which was cancelled after airing six episodes, and Paige went on to play support roles in various series, including the mystery crime drama “NYPD Blue”, the thriller horror drama “American Gothic” and the family drama “Party of Five”.

Her next lead role was in the thriller drama “The Agency”, created by Michael Frost Beckner and aired from 2001 to 2003. The series also starred Rocky Carroll and David Clennon, and follows the work of the CIA. A few of her other roles in the following years were in four episodes of the comedy “Rescue Me”, 11 episodes of the comedy “Big Shots”, and six episodes of the mystery crime drama “Damages” which was a hit, winning 16 awards including a Golden Globe.

One of Paige’s most recent roles in TV series has been in the mystery science fiction drama “The 100”, which starred Eliza Taylor, Bob Morley and Marie Avgeropoulos, and follows 100 delinquents sent to Earth 97 years after the nuclear war destroyed nearly the entire civilization. It won nine awards and was nominated for 38, others including a Primetime Emmy.

The year 1994 saw Paige portray Louise, one of the lead characters in the drama “Dead Funny” written and directed by John Feldman, and which also starred Elizabeth Pena and Andrew McCarthy. It follows Viv who finds her boyfriend killed with a large knife in their kitchen.

She appeared in several mediocre movies such as the romantic comedy “The Pompatus of Love”, the thriller drama “The Feminine Touch” and the musical science fiction “Vibrations”, before her next notable performance in the 2000 drama “Urbania”, starring alongside Dan Futterman and Scott Denny, which follows the life of a troubled man searching for a mysterious person in New York City. The film won five awards out of the nine it was nominated for.

In 2006, Paige portrayed the supporting character Carol Vermeil in the biographical sports drama “Invincible”, which starred Mark Wahlberg, Greg Kinnear and Elizabeth Banks, and is the true story of Vince Papale, who was more than 30 years old when he began playing for the Philadelphia Eagles competing in the National Football League (NFL). The year 2007 saw Paige appear in another hit movie – the family sports comedy “The Game Plan” – which starred Dwayne ‘The Rock’ Johnson, Kyra Sedgwick and Madison Pettis, and follows an NFL football player who learns that he has an eight years old daughter with his ex-girlfriend. The film was nominated for three awards.

Paige went on to appear in two critically acclaimed movies: the 2009 war drama “Taking Chance” which starred Kevin Bacon and won eight awards including one Golden Globe, and the 2009 crime thriller “The Stepfather”, which starred Penn Badgley and Dylan Walsh, and was nominated for two awards.

Paige’s most recent role in a movie has been in the 2020 horror mystery drama “Books of Blood”, which starred Britt Robertson, Freda Foh Shen and Nicholas Campbell, and follows the tales of three people whose lives become entangled.

Paige has appeared in several documentary films and series ,including the 1991 short film “The Makin of ‘Teenage Mutant Ninja Turtles’: Behind the Shells”, and the 2003 episode “The Films of David Lynch” of the series “The Directors”.

She has also been invited to make a guest appearance in various talk-shows, including “The Late Late Show with Craig Kilborn”, “The Rosie O’Donnell Show” and “Entertainment Tonight”.

Paige met Jason O’Mara sometime in the early 2000s and he asked her to marry him nine months into the relationship when they were vacationing in Jamaica.

The two exchanged vows on 19 September 2003 in a private ceremony attended by their closest friends and family, and in 2004, Paige gave birth to their son David O’Mara. She announced on 19 June 2017 that she and Jason had been living separately for close to two months, and that she had filed for divorce while asking for joint legal custody and spousal support.

Neither of the two have spoken about anyone they had dated before meeting each other, nor after their separation, so as of February 2021, Paige is still married to Jason O’Mara although she has filed for divorce, and they have one son together.

Paige likes to talk about sex, and has stated that it’s important for her to be with someone who is good in bed. Being a dancer, she believes that she can determine if someone has that quality just by watching them dance.

As she’s stated: ‘Sex is all about balance and sensitivity, and being aware of where the other person’s energy is. Great dancers are usually great lovers.’

She loves to travel, and has been to many US states for both work and pleasure, while she’s also been to various European countries, including England, France and Switzerland.

In her spare time, Paige enjoys watching movies starring her favorite actor and actress Leonardo DiCaprio and Anne Hathaway, such as “Inception”, “Shutter Island” and “One Day”.

Who is Jason O’Mara?

Jason O’Mara was born in Sandycove, Dublin, Ireland, on 6 August 1972 – his zodiac sign is Leo and he holds both Irish nationality and American citizenship, the latter received in 2009. He is an actor who is probably still known best for his starring role in the 2006 crime drama series “In Justice”, which also starred Kyle MacLachlan and Constance Zimmer, and follows the attorney David Swain who launched the organization National Justice Project, that aims to help people who have been wrongfully accused. The series was nominated for two awards.

Jason was raised in Dublin alongside his sister Rebecca O’Mara, who is also an actress, with 21 movie and TV series credits to her name, while she is perhaps known best for her portrayal of Rachel in the 2016 mystery crime series “Line of Duty”.

Jason matriculated from high school in 1990, and then enrolled at Trinity College, Dublin from which he graduated with a Bachelor of Arts degree in drama and theatre in 1994. He moved to London, England and joined The Royal Shakespeare Company, appearing in many plays including “Popcorn” and “The Jew of Malta”, while he was nominated for an Irish Theatre Award for Best Supporting Actor for his performance in the 2002 play “Bash”.

Jason has made appearances in close to 70 movies and TV series, including in many critically acclaimed series such as the action drama “The Agency”, the hit war mini-series “Band of Brothers”, and the sitcom “High Stakes”. Some of his most notable lead roles have been in the British drama series “Life on Mars”, and the science fiction series “Terra Nova”.

Jason is also recognized for having voiced Bruce Wayne / Batman in the superhero animated series of movies “DC Universe Animated Original Movies”, a role he reprised in the animated superhero movies “Justice League: War” and “Son of Batman”, amongst many others. He also appeared in the series “Marvel’s Agents of S. H. I. E. L. D.”, portraying Jeffrey Mace. In 2018,Jason joined the main cast of the dystopian alternate reality series “The Man in the High Castle”.

His most recent role has been in the 2020 animated action fantasy “Blood of Zeus”, in which he voiced the lead character Zeus.

He has been nominated for two Irish Film and Television Awards (IFTA), winning one: a 2017 Award for Best Actor in a Supporting Role – Film for his performance in the movie “The Siege of Jadotville”.