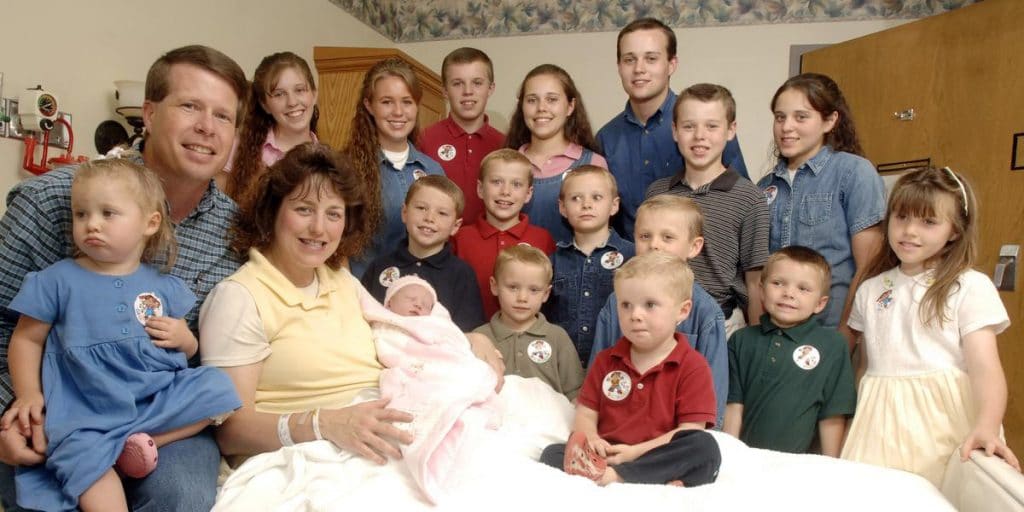 Facts You Didn’t Know About ’19 Kids and Counting’

Without a doubt the Duggars are one of the most peculiar reality TV families, due to their out-of-the-mould dynamics and traditions. However, there’s more to them than just having a lot of kids. Throughout the seven years the show was on air, the family’s controversial opinions gained them haters and followers in equal part.

Despite the family’s fame and scandals, there’s still a lot of facts you probably don’t know about “19 Kids And Counting”. Let’s discover them!

They Lived Debt-Free For Years

If having a family requires too much time and dedication, it’s impossible to imagine how hard it must be to raise 19 kids. Though it’s not surprising the Duggars’ lifestyle provokes many questions, people often wonder how the family manages their finances.

Knowing people’s general interest about this topic, Michelle and Jim Bob were always open about it. They have affirmed their knowledge about family finances was acquired after attending a seminar given by the real estate agent Jim Simmons, who is widely known for giving financial advice along with biblical readings.

Whether or not Simmons’ teaching method is effective for other people is yet to be seen, though it undeniably solved the Duggars’ doubts about how to manage their money, and led them to avoid getting into debt. As Jim Bob affirmed on the family’s blog, they bought several properties with cash, which subsequently allowed them to establish a real estate business which has been providing their income for decades.

Following their debt-free philosophy, the Duggars also managed to build their 7000 square feet house. Despite their efforts, the project which started in the early 2000s took longer than expected, and wasn’t finished until 2006 – its cost is still unknown.

They Used To Be On Birth Control

If you haven’t watched “19 Kids And Counting” even once, you have most-likely wondered why the family has so many children. On the contrary, if you’re a casual viewer you might have assumed the Duggars have never tried to use any contraceptive method due to their religious beliefs.

What is the truth then? The assumption that Michelle and Jim Bob Duggar have always had a strong Christian faith is quite correct, though surprisingly enough it didn’t stop them from using the birth control pill during the first four years of their marriage.

Unfortunately, Michelle suffered a miscarriage shortly after resuming taking contraceptives following the birth of their first child. This incident ultimately led the Duggars to stop using the birth control pill altogether, as they apparently were told this was the reason for the miscarriage.

However, the Duggars’ decision to not take contraceptives wasn’t exclusively prompted for medical reasons, but also by religion. As Jim Bob affirmed on the family’s blog, he and Michelle felt their initial thoughts on children were negative and went against their Christian faith.

Besides being heavily criticized for their thoughts on having kids, it’s also important to note that regardless of the fact that Michelle never resumed taking birth control, she suffered another miscarriage later in 2010.

The Controversy Regarding Their Educational Methods

As it’s widely known, the Duggars’ customs and family traditions are not necessarily everyone’s cup of tea. This is no different when it comes to the educational methods they use with their children.

If you watched “19 Kids And Counting” at least once, you might remember that Michelle Duggar always tried to talk calmly with her kids, if they happened to break the tight rules of the household. Despite what was seen on screen though, some viewers of the show are sure that the family’s methods of discipline go farther than just a sweet scolding about kindness.

Why do people affirm this? In a 2012 interview, Michelle confirmed that she taught her children self-control through the “Quiet and Still” method, which consists of teaching kids to sit quietly and under supervision during various minutes, and several times a day.

However, Michelle’s disciplinary technique was deemed as too similar to the “blanket training”, a polemic practice invented by Michael and Debi Pearl which has been criticized for apparently prompting child abuse through punishments such as spanking.

Though those were merely assumptions, people can’t be at fault for thinking the two disciplinary practices are almost the same, as even during Michelle’s interview it was noted that her method was ‘similar to blanket training, but without the toy’.

Courtship Has Its Rules

It’s a well-known fact that the Duggars don’t allow their children to date. Instead Jim Bob and Michelle need to approve the prospective boy or girlfriend before allowing their children to start an official courtship, which even then has strict rules. Usually each couple has a chaperone, who are usually the younger kids, but at least 10 years old. These chaperones accompany the couple during their dates, and it’s up to themselves to determine if the couples’ are breaking the established rules set beforehand. This means that chaperones and couples create a list of rules together, though these can be changed depending on how the relationship progresses.

What happens when there are no chaperones available? As Michelle Duggar has affirmed, when the couples’ younger siblings can’t supervise them, the couples ask friends and even their grandma to chaperone them.

While these dating rules and arrangements are hard to understand for many people, the Duggars have taught these customs to all of their children.

Jim Bob Wanted To Be A Senator

Jim Bob’s career might have been brief, but it wasn’t forgotten.

Although it’s unknown how long Jim Bob has been linked to the Republican party, it wasn’t until 1999 that he became an Arkansas House of Representatives member.

Jim Bob and Michelle Duggar will break their silence on the "19 Kids and Counting" molestation scandal this Wednesday on Fox News. Megyn Kelly has landed the exclusive. Will you watch? http://extr.tv/1FVuOI8

Then in 2002 he decided to run for the US Senate, though he was defeated during the Republican nomination by Tim Hutchinson, who surpassed Jim Bob by over 50,000 votes.

Later in 2006 Duggar tried to be a public officer once again by running for a seat in the Arkansas State Senate, but luck wasn’t on Duggars’ side again, as he was defeated by Bill Pritchard.

Despite his political failures, Jim Bob’s campaign was marked by his advocacy on severely punishing sexual offenders and incestuous relationships. His strong opinions about these topics were criticized when in 2015 it was revealed his son Josh had sexually molested several local girls and some of his sisters in 2003. Neither Jim Bob nor Michelle reported their son to authorities when the unfortunate events happened, deciding instead to send him to a Christian counselling program.

A Duggar Son Also Wants To Be A Politician

Even if Jim Bob Duggar desisted from trying to obtain a seat in public office years ago, his son Jed has the same intentions of becoming somewhat prominent as a politician.

During his campaign to become a member of the Arkansas House of Representatives in 2020, Jed described himself as conservative, and advocated for lowering taxes; in the end he was defeated in the election by Megan Godfrey, who won by a small vote margin.

Jed’s defeat was marked by problems related to the source of his campaign funds. Following a report made by The Sun, in August 2020 a Louisiana man named Ross Little initially donated $2,800 to Jed’s campaign. Then in September the same person sent $5,600, surpassing by far the limit of $2,400 established by the Arkansas State for particular donors.

While the violation of this limit won’t require Jed Duggar to go to jail, he must pay a fine of $3,500 for it. Though it’s known his campaign was also funded by some of his siblings, it’s uncertain if the rest of the Duggar family helped Jed to pay the fine.

They Were On TV Before The Show Aired

“19 Kids And Counting” was aired for the first time in 2008, though the show’s name was initially different, as the younger daughters Jordyn and Josie weren’t born at the time of its premiere.

What most people don’t know is that years before the show aired, Michelle, Jim Bob and their children had already appeared in a documentary series entitled “14 Children And Pregnant Again”, which was produced by Discovery Health Channel.

The success the series had was so huge it led the network to produce other documentaries, such as “16 Kids And Moving In”, and “Raising 16 Children”.

Even if the Duggars’ success was surprising, more shocking was the way the family was discovered by the media. It actually happened in 2002 during Jim Bob’s campaign for the US Senate, when a journalist took a picture of them and it was published in the New York Times shortly afterwards.

This picture took the attention of a magazine writer, who interviewed the Duggars and sold the article to Parents Magazine. Thanks to this interview the family was contacted by Discovery, starting what will be a long career as reality TV stars.

Apparently, Jim Keeps All The Money

While the Duggars have been open about the way their real estate investments allowed them to raise 19 kids, it’s known that they don’t talk too much about the money they received from appearing in “19 And Counting” and other shows.

Of course, it’s understandable that they don’t publicly reveal what they do with all of their money, but declarations made by Michelle and Jim Bob’s son-in-law Derick Dillard, have raised eyebrows at the family, regarding this subject.

What is it about? Everything started when in 2017 Derick and his wife Jill left the “19 Kids And Counting”s spin-off series “Counting On”. At the time Derick expressed his annoyance at TLC for not financially supporting them during the birth of their second child, though apparently there’s more than that. More recently, Derick has accused Jim Bob Duggar of hoarding the money derived from “Counting On”, which is a serious accusation especially considering neither Michelle nor Jim Bob appear in the said show.

Besides that, Derick also accused Jim Bob of over controlling his children, allegedly not allowing them to control their adult life.

While Derick’s words are yet to be proven, it’s unknown if the Duggar patriarch would have legal problems if this turns out to be true.

Josh Duggar Was Accused Of Catfishing and Infidelity

When in 2015 allegations of Josh Duggar’s sexual abuse were disclosed to the general public, it resulted in a huge scandal for his family, and the subsequent cancellation of “19 And Counting”. However, Josh added other things to his list of controversies later on.

Only a few months after his sexual abuse records were revealed, several web portals reported records of payments made by Josh to the website Ashley Madison, which is known for promoting adultery. In a statement released later by the Duggars, Josh admitted he had been unfaithful to his wife Anna – ‘I have been the biggest hypocrite ever’ he said, also acknowledging his addiction to pornography.

This wasn’t the end of his scandals though. In 2017 a man from Los Angeles named Matthew McCarthy sued Josh for stealing his photos to create fake accounts on websites such as Twitter and OkCupid, which apparently were used by Josh during his aforementioned cheating escapades. Matthew alleged Josh’s usage of his photo had a negative emotional effect on him, in addition to losing several jobs as employers didn’t want to be associated with him due to Josh’s sexual scandal.

Matthew’s efforts were futile though. The case was ultimately dismissed for being filed in California instead of Arkansas, where Josh resides.

So do any of these revelations effect you, to perhaps watching more of less repeats? An interesting conundrum!?