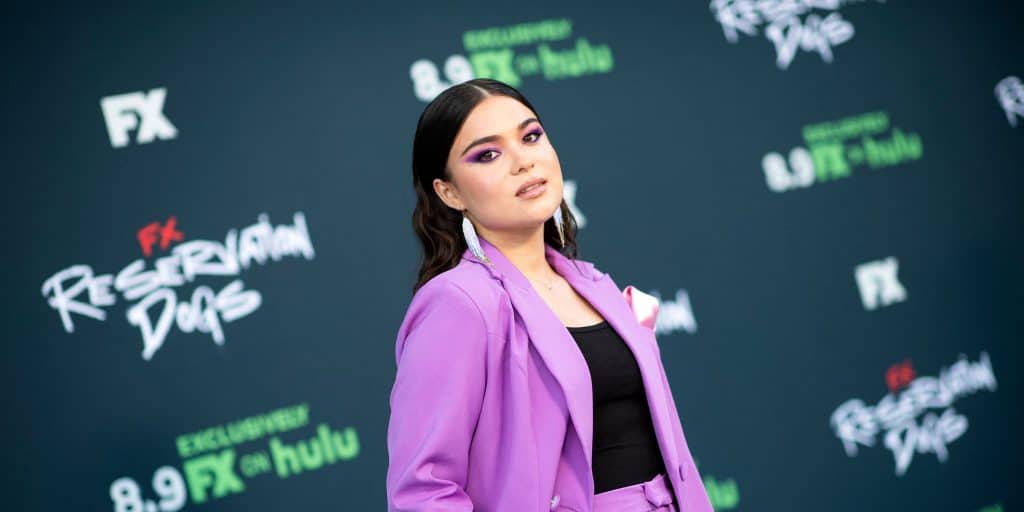 Who is Kawennáhere Devery Jacobs?

Kawennáhere Devery Jacobs was born in Kahnawake, Quebec, Canada, on 8 August 1993 – her zodiac sign is Leo, she holds Canadian nationality, and her ethnicity is Kanienʼkehá꞉ka (Mohawk). She’s an actress with close to 40 credits to her name, while she’s perhaps known best for her portrayal of Elora Danan in the comedy crime series “Reservation Dogs”. It was created by Sterlin Harjo and Taika Waititi, starred D’Pharaoh Woon-A-Tai, Elva Guerra and Sarah Podemski, and follows four Native American teens, as they’re being raised on a reservation.

Kawennáhere was raised in Kahnawake by her parents, about whom nothing’s known as she respects their privacy. Because she hasn’t spoken of having any siblings, Kawennáhere’s widely believed to be an only child.

She became interested in acting while attending a local elementary school, and appeared in various plays performed at the school. She enrolled at high school in 2007, and the same year saw her launch her acting career, with her portrayal of Monique in the episode “Big Top” of the fantasy mystery series “The Dead Zone”. Kawennáhere made her debut film appearance in 2008, by portraying Alexa Dumont in the drama “South of the Moon”, directed by Antonio DiVerdis, and which starred John Ralston, Jake McLeod and Moya O’Connell. It follows the lives of a young boy and his uncle, and the film won one of the two awards for which it was nominated.

Kawennáhere continued acting during her years at high school, then upon matriculating in 2011, she enrolled at Jon Abbott College from which she graduated with a Bachelor’s degree in correctional interventions in 2015.

In 2009, we saw Kawennáhere play Claudia Auditore in all three episodes of the popular action family adventure mini-series “Assassin’s Creed: Lineage”, which starred Romano Orzari, Manuel Tadros and Jesse Rath, and follows Assassin Giovanni Auditore as he’s investigating the murder of the Duke of Milan.

The following years saw Kawennáhere make a guest appearance in an episode or two of various series, including the comedy “By the Rapids”, and the fantasy horror drama “Being Human”. In 2014 and 2015, she played Lollipop, the main character in the comedy “Mohawk Girls”; it was created by Tracey Deer rand Cynthia Knight, also starred Brittany LeBorgne and Heather White, and follows four women who are learning how to be Mohawk. The series was nominated for 10 awards.

Kawennáhere was then cast to play supporting characters in a couple of not-so-popular series, such as the crime drama “Cold” and the drama “This Life”. In 2019, she portrayed Sam Duchene in the mystery crime drama “Cardinal”, which starred Billy Campbell, Karine Vanasse and Kristen Thomson, and follows a Cardinal who’s trying to catch a serial killer. The series aired from 2017 to 2020, and won 39 of the 84 awards for which it was nominated.

Three of Kawennáhere’s most recent TV series roles have been in the mystery fantasy drama “American Gods”, the comedy “Rutherford Falls”, and the crime comedy “Reservation Dogs”; she’s currently recording for the upcoming animated action adventure “ARK: The Animated Series”.

In 2013, Kawennáhere played Nourhan in the action adventure drama “Exploding Sun”, as well as Alia in the crime drama “Rhymes to Young Ghouls”.

In 2016, we saw her star as Lia in the drama “The Sun at Midnight”, written and directed by Kirsten Carthew, and which also starred Duane Howard and Mark Anderako. Set in the Arctic Circle, the movie follows the friendship between a hunter who’s searching for a missing caribou herd, and a teenager who has run away from home; it won six of the 10 awards for which it was nominated. Kawennáhere was then invited to star in a number of short movies, such as the 2017 dramas “Rae” and “Backspot”, and the 2018 drama “Teiakotsinarèn: Tonte (The Hoof Lady)”.

Also in 2018, she played Britney in the popular mystery crime drama “The Lie”, written and directed by Veena Sud, and which starred Peter Sarsgaard, Mireille Enos and Joey King. It follows a father and daughter who are going to a dance camp, and have found the girl’s best friend lying in the street.

Three of Kawennáhere’s most recent movie roles have been in the 2019 horror “Blood Quantum”, the 2019 drama “Rustic Oracle”, and the 2021 drama “We Burn Like This”; she’s currently shooting for the upcoming dramas “This Place” and “The Road Behind”.

In 2016, Kawennáhere voiced Sam in the video game “The Walking Dead: Michonne”.

She has five writing, two producing and three directing credits. Kawennáhere wrote, produced and directed the 2016 short drama film “Stolen”, as well as the 2017 short movie “Rae”, and in 2018, she wrote and directed the short drama movie “Ara Marumaru”. She also wrote the 2018 short film “Teiakotsinarèn: Tonte (The Hoof Lady)”, while she’s currently working on the upcoming drama movie “This Place”.

Kawennáhere has made a guest appearance in a couple of talk-shows, such as “Katie Chats”, “CTV News at 11:30 Toronto”, and “CityLine”.

She was nominated for a 2014 Canadian Screen Award for Performance by an Actress in a Leading Role, for “Rhymes for Young Ghouls”.

Kawennáhere prefers to keep the details of her love life away from the media’s attention, and hasn’t spoken of any men or women whom she has perhaps been with. She has, however, revealed that she’s queer, meaning that she’s not attracted by the opposite sex.

It’s believed by many that Kawennáhere’s today in a relationship with a non-celebrity girl, and a fan has even claimed to have seen the two kissing in the streets of Toronto; no evidence has been provided to support these claims, nor has Kawennáhere commented on this.

As of August 2021, she appears to be single, hasn’t married, and doesn’t have children.

Kawennáhere’s a fashionista, as she’s trying to keep up with all the latest fashion trends. She’s certainly a shopaholic, as she goes shopping for clothes multiple times every week. Kawennáhere loves to dress up for whatever the occasion is, and doesn’t usually skip on an opportunity to put on a scary Halloween costume.

She loves to eat various foods – her favorite is pizza.

Kawennáhere has her own favorite actors and actresses, some of whom are Leonardo DiCaprio, Jim Carrey and Julia Roberts, and a couple of her favorite movies are “Titanic”, “The Eternal Sunshine of the Spotless Mind” and “Pretty Woman”.