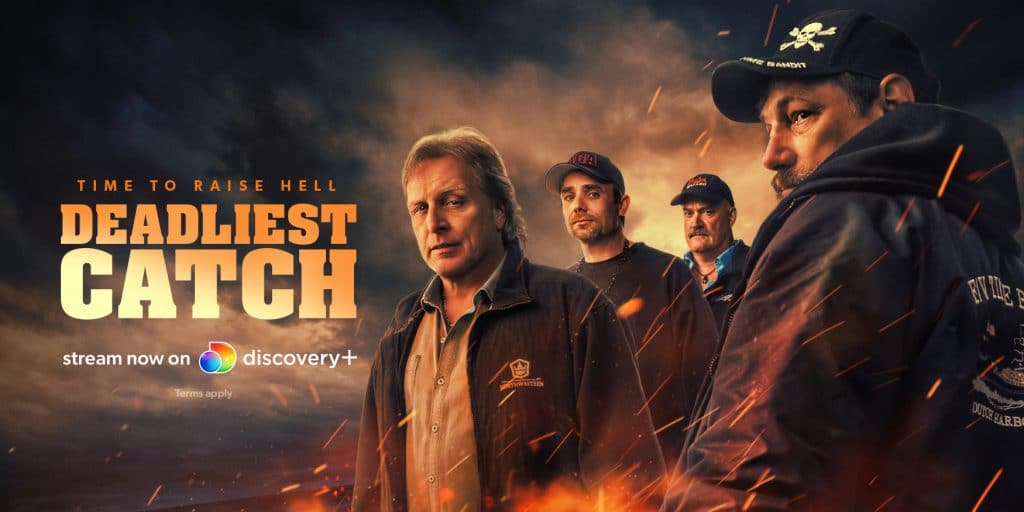 ‘Deadliest Catch’ is one the most popular reality television series on Discovery Channel, which not only gathered a mass following of viewership, but also earned numerous accolades that include several Primetime Emmy Awards. Since its debut in 2005, ‘Deadliest Catch’ became so popular that it earned the right to broadcast all over the world for a total of seventeen seasons, and spawned several spin-off series, as well as a video game title.

As many might know by now, ‘Deadliest Catch’ documents the daily lives and tribulations of Alaskan fishermen scouring the Bering Sea for the highly prized commodity of King and Snow Crabs. The show earns its name from the many dangers involved in crab fishing, which makes it the most dangerous occupation in America, which many consider more hazardous than logging.

These guys will do whatever it takes to get luck on their side, but who said they can't have fun while doing it?

Watch a brand new episode of #DeadliestCatch this TUESDAY at 8p on @Discovery and streaming on @discoveryplus. Download and subscribe: https://t.co/uW5wBAue9O pic.twitter.com/F5Rc3XbTp4

From untamed and unpredictable sea weather, to an often cold, harsh climate, and working with heavy equipment under the strain of long, arduous hours onboard isolated fishing vessels, the fishermen face many difficulties.

To absolutely prove how dangerous the occupation can be, many of the show’s stars, who include several of the viewers’ all-time favourites, have either suffered severe injuries or, in some cases, gave their lives in the pursuit of the deadliest catch. In fact, several scary moments have been caught on camera, and the death of one of the beloved Captains even became immortalised on film.

While both one of the saddest moments in the show’s long history, and one of the most dramatic and memorable moments, it confirms what so many people believe about crab fishing.

By all considerations, the fatality rate and hazardous concern of the occupation are so high that the expectation of being injured on the job is absolute. Sadly, many of the fishermen hardly ever live past the age of forty, though not necessarily dying ‘on the job’.

Aside from some of the tragedies that befell ‘Deadliest Catch’ on film, a few of the fishing vessels also sank, with some going missing, only to prove how unpredictable and unforgiving the frigid waters of the Bering Sea can be. However, ‘Deadliest Catch’ has also been host to tragedies unrelated to the dangers of the occupation, as some of the shows’ stars passed away while on land.

Most of these cases involve some kind of substance abuse, and while not directly related to the dangers of the sea, the occupation takes some of the blame.

Working in a stressful and tiring environment often leads the occupants to seek relief at the bottom of a bottle or the bitter end of a needle, at times leading to fatal results, but at least they didn’t end up at the bottom of the ocean, forever lost in Davy Jones’ Locker.

With so many fatalities and occupational hazards, the viewers have possibly become used to seeing many faces come and go on the show. For those such as Captain Sig Hansen, who stayed for so long, it’s a living miracle.

However, some of the fishermen and stars from the show left for ulterior reasons, that might even seem darker than a forlorn fate in the freezing waters of the Bering Sea.

This list includes Joshua Tel Warner, who after appearing on the show, was later arrested and convicted of bank robbery. It also includes the younger brother of the beloved captain Sig Hansen, Edgar.

For those of you who might not be familiar enough with ‘Deadliest Catch’ to remember Edgar Hansen, he served on his brother’s fishing vessel, The Northwestern, from the ninth season until abruptly leaving the show following the end of the fourteenth season.

For the most part, Edgar assumed a likeable role. Not only because he resembled his adored brother, Captain Sig Hansen, in both looks and personality, perhaps coming off as a bit more playful and relaxed, but also because he appeared to be a capable fisherman.

Edgar served as the ship’s leading engineer, cook, and deck boss, and for some time seemed like the perfect second in command of the Northwestern.

He also assumed a prominent role on the show as a member of the most adored family of ‘Deadliest Catch’, quite easily winning over the affection and admiration of the viewers. Then, to everyone’s surprise, at the beginning of the fifteenth season, Edgar disappeared and never returned to show his face in front of cameras.

The show never made any announcement concerning a tragic event, nor did they mention his departure from the show. Considering the many dangers involved in crab fishing, fans naturally became concerned and started digging for the truth.

Unfortunately, they discovered a shocking reality that one would not expect from such an easily lovable person, especially not someone from their favourite reality series. Yet, who can judge a person through the lens of a camera?

What Happened To Edgar?

On 18 July 2018, news of Edgar broke the internet, and obviously pretty soon reached social media. The news suggested that Edgar was the chief perpetrator of a scandalous crime involving the sexual abuse of a sixteen-year-old teenage girl. Although the victim chose to keep her identity secret, details of her case would nonetheless find its way onto the internet.

After all, it involved a famous reality star. According to most reports, the young girl confessed the ordeal to her therapist, claiming that the incident of abuse took place the year before the news surfaced, in September of 2017.

The unnamed victim claimed the incident occured at a local residence in Snohomish County, Washington State, where she became acquainted with Edgar Hansen.

Unfortunately, no details were ever released explaining how Edgar knew the girl, nor if the possibility exists that they might have been related in some way. With the victim’s identity concealed, there remains little to be found about this accusation. While many would not easily believe such allegations, Edgar has since pleaded guilty.

Initially, when his wife confronted him, he denied every possibility, but during the pending case against him, his lawyers advised him to take a plea bargain. Subsequently, Edgar admitted to touching the girl’s genitalia with the intent of sexual abuse and self-gratification.

His plea statement was accompanied by an apology statement, though it could not prevent his conviction under fourth-degree charges of sexual assault, and the court gave Edgar a suspended sentence of 364 days in prison, followed by two years of probation and an agreement that he would undergo a therapeutic program to help prevent any further infringements such as the above mentioned.

On top of that, Edgar had to pay fines to the court estimated at $4,800. For some, this might not seem like a fitting punishment, yet the repercussions became far worse for the reality star. Edgar was forced to register as a sex offender, and supply the court with a DNA sample for cross-reference in similar cases.

As a direct result of his actions, both Discovery Channel and the producers behind ‘Deadliest Catch’ severed all ties with Edgar, forcing him to leave the show and do it as quietly as possible.

Unfortunately, news of his scandalous mistake got out, and he couldn’t leave the show as quietly as Discovery Channel would have hoped.

However, it seems that while Edgar may not appear in front of the cameras, he is still permitted to work on The Northwestern. According to a recent Tweet by Sig’s daughter, Mandy, it seems that he retained his job as the deck boss and lead engineer of his brother’s fishing vessel. Regardless, Edgar will never return to the show.

Does It Run In The Family?

As many might know, Edgar was not the only Hansen to face allegations of abusive behaviour. Sometime earlier, Sig Hansen also stood accused of similar crimes, with the only difference being that the victim didn’t hide her identity, making her allegations public.

She was no other than Sig’s estranged daughter from a previous marriage, but fortunately Sig was never prosecuted for the allegations brought against him. During the police investigation, Sig agreed to a lie detector test, which he passed, and considering a lack of evidence, the court never proceeded with the case beyond an investigation.

Sig later told the media that it was nothing more than a shake-down attempt by his ex-wife and estranged daughter.

If you are an adoring fan of The Northwestern, or any other families and vessels of ‘Deadliest Catch’ for that matter, feel free to keep catching every episode of your favourite show. With the latest seventeenth season airing from April 2021, you are bound to stay entertained.