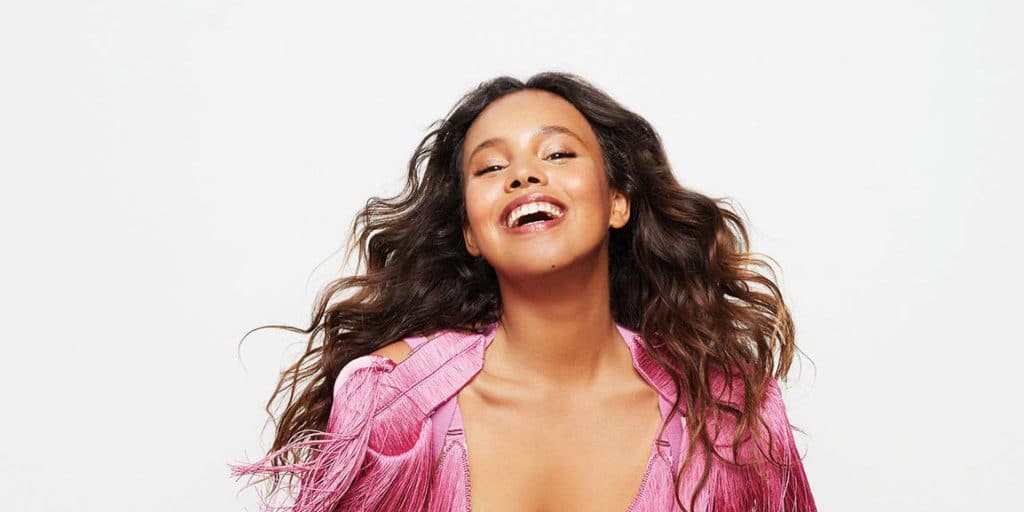 Who is Alisha Boe?

Alisha Ilhaan Bø (stet) was born in Oslo, Norway, on 6 March 1997 – her zodiac sign is Pisces, and she holds both American and Norwegian nationality. She’s an actress, with over 30 credits to her name, while she’s perhaps known best for her portrayal of Jessica Davis in the critically acclaimed mystery thriller series “13 Reasons Why”. Created by Brian Yorkey, it starred Dylan Minnette, Katherine Lagford and Christian Navarro, and follows the teenager Clay Jensen, who’s investigating the suicide of his crush Hannah; the series aired from 2017 to 2020, and won four of the 20 awards for which it was nominated.

Alisha was raised an only child initially in Oslo, by her Norwegian mother who was born in Trondheim, and her Somali father.

Her parents divorced when she was five years old, and two years later, Alisha moved with her mother to Los Angeles, California, as she had remarried to an American man.

Alisha attended a local elementary school in Los Angeles, and launched her acting career aged 11 in 2008, with her portrayal of Child Lisa in the mystery crime horror movie “Amusement”. The film starred Katheryn Winnick and Laura Breckenridge, and follows a serial killer who’s stalking three women. In the following year, Alisha appear in two films: the short drama “Plastic Makes Perfect”, and the romantic comedy “He’s on My Mind”.

She continued acting throughout her educational years. Alisha attended El Camino Real High School, but upon matriculating in 2015, she didn’t enroll at college, but remained focused on acting.

Alisha made her debut TV series appearance in 2012, with her portrayal of Pretty Girl, in the episode “Everything Is Not Okay” of the comedy drama “Parenthood”; the following two years saw her appear in an episode or two of several series, including the comedy “Trophy Wife”, the romantic comedy drama “Modern Family”, and the science fiction thriller drama “Extant”.

She gained recognition in 2015, when she was cast to play Daphne in 15 episodes of the soap opera “Days of Our Lives”, and in the same year, Alisha guest starred as Farrah Meyers in the episode “Viral” of the mystery crime drama “NCIS”. She was then invited to play Becca, in the comedy drama “Casual”, created by Zander Lehmann, and which starred Michaela Watkins, Tommy Dewey and Tara Lynne Barr.

It follows a brother and his recently divorced sister, as they’re living in the same house; the series was nominated for six awards. A couple of Alisha’s following roles were in the mystery crime drama “CSI: Cyber”, the hit crime drama “Ray Donovan”, and the action fantasy drama “Teen Wolf”.

Her most recent TV series role has been her portrayal of Helena, in the 2020 episode “#AnnabelleClarkeIsOverParty” of the adventure drama “Day by Day”.

In 2012, Alisha was cast to play Tara in the popular horror mystery “Paranormal Activity 4”, directed by Ariel Schulman and Henry Joost, and which starred Stephen Dunham, Katie Featherston and Matt Shively.

It follows a mysterious woman and a child who have moved into a new neighborhood, exactly five years after Katie and Hunter had disappeared from the same neighborhood. The movie won two awards.

The same year also saw Alisha appear in the sports comedy drama “Poms”, and the horror mystery drama “Gates of Darkness”, and most recently, in 2021 she was featured in the music video “Leon Bridges: Why Don’t You Touch Me”.

Alisha has been featured in various documentaries, such as the 2009 video “Kids Talk Politics: A New Puppy in the White House”, the 2017 series “13 Reasons Why: Beyond the Reasons”, and the 2018 short video “13 Reasons Why: Discovering Jessica Davis”.

She has made a guest appearance in various talk-shows, including “Noches con Platanito”, “Entertainment Tonight Canada”, and “Good Morning America”.

In 2020, Alisha and her colleagues were nominated for an Alliance of Women Film Journalists Excellent Dynamic Activism (EDA) Special Mention Award for Actress Most in Need of a New Agent, for their performance in “Poms”.

Alisha’s highly secretive when it comes to her love life, and hasn’t spoken of any men (or women) whom she has perhaps been with. This is mostly why there are rumors circulating the internet, concerning her past and present relationships, and her sexual orientation.

However, it’s widely believed that Alisha was in a relationship with Scott O’Brien back in 2017. He’s a non-celebrity American man, and the two were apparently seen together on a number of occasions, while Alisha also uploaded a couple of pictures, featuring them together, onto her Instagram account. They were together for around a year, before splitting for unknown reasons.

Alisha’s character in the series “13 Reasons Why” was in a relationship with three characters, portrayed by Jan Luis Castellanos, Miles Heizer and Brandon Flynn; some believe that she has perhaps dated them in real life, but this hasn’t been confirmed.

As of August 2021, Alisha seems to be single, hasn’t married, and doesn’t have children.

Alisha’s highly active on Instagram, mostly because she enjoys the attention she’s receiving from her four million subscribers. She’s uploaded over 260 pictures, the majority of which have been taken during her everyday life.

Her favorite season is summer, because she loves the feeling of the Sun on her skin, enjoys sun tanning at the beach, and swimming in the ocean.

Alisha’s physically highly active, mostly because it’s important for her career to remain fit. She has several training sessions at the gym each week, and is following a very strict diet.

She’s passionate about travelling, and her acting career has already taken her to various US states, as well as a couple of European countries; Alisha’s dream travel destination is Lyon in France.

She has her own favorite actors and actresses, some of whom are Jim Carrey, Robert De Niro and Natalie Portman, while a couple of her favorite films are “Bruce Almighty”, “Sleepers” and “V for Vendetta”.