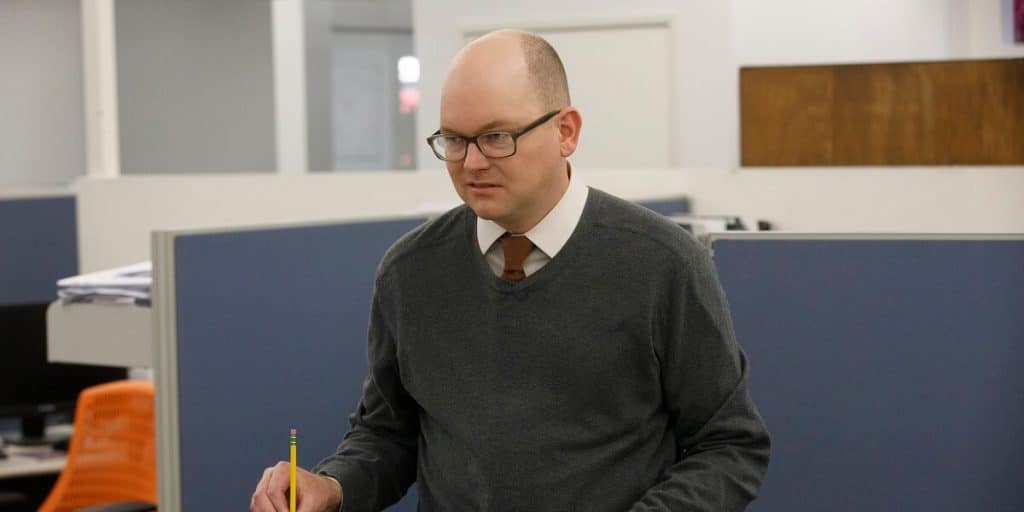 All About Mark Proksch from ‘The Office’: Net Worth, Biography

Who is Mark Proksch?

Mark Edward Proksch was born in Onalaska, Wisconsin USA, on 19 July 1978 – his zodiac sign is Cancer and he holds American nationality. He is an actor and a comedian, who is perhaps known best for his portrayal of Nate in the critically acclaimed comedy series “The Office”, created by Greg Daniels, Stephen Merchant and Ricky Gervais, and which starred Steve Carell, Jenna Fischer and John Krasinski. The series follows a group of workers having fun at their workplace, aired from 2005 to 2013, and won 51 award including a Golden Globe, while it was nominated for 193 other awards. Mark was a member of the main cast from 2010 to 2013.

Mark was raised in Onalaska, but hasn’t shared any details concerning his parents or any siblings he might have, as he prefers to keep his personal matters to himself.

He became interested in comedy while attending high school, but didn’t think about making a career out of it. Mark was urged by his parents to focus on his studies, and upon matriculating in 1996, he enrolled at a college and graduated with a Bachelor’s degree in 2000. Mark then went to work at an advertising agency, however, when things didn’t go as he planned and he was fired, Mark chose to turn to comedy.

He came up with the alias Kenny ‘K-Strass’ Strasser who is a yo-yo master, and appeared in numerous TV shows, steadily increasing his popularity. The magazine “Paste” described his act as ‘the funniest thing that’s ever happened’, while many other magazines praised Mark’s skills.

Mark made his debut film appearance aged 34, in the 2012 comedy “Found Footage Festival Volume 6: Live in Chicago”, and a couple of his following roles were in the 2012 short comedy “Swords, Knives, Very Sharp Objects and Cutlery”, the 2013 short musical comedy “Pissed Jeans: Bathroom Laughter”, and the 2013 comedy “Holding Patterns”.

The following years saw Mark appear in a couple of short movies such as “Good Morning Tri-State”, “Smart Pipe” and “Dream Corp LLC”. He made his voicing debut in the 2014 animated fantasy comedy “Hamlet A. D. D.”, while the same year saw him portray a supporting character in the comedy drama “A Merry Friggin’ Christmas” which starred Joel McHale and Lauren Graham, and follows Boyd Mitchler spending Christmas with his family of misfits.

Mark has mostly been focused on appearing in TV series in his career, but three of his most recent roles in movies have been in the 2016 horror comedy “Another Evil”, the 2019 drama “Her Mind in Pieces” and later that year in the comedy “VHYes”.

After he gained recognition for his performance in “The Office”, Mark made his next appearances in in the 2013 episode “Wingmen” of the comedy “Animal Practice”, but was then invited to guest star single episodes of various series, such as the comedy “New Girl”, another comedy “Hello Ladies”, and the action comedy “Eagleheart”.

His next notable performance was in 2016, when cast to portray Todd, one of the lead characters in the live-action animated fantasy comedy “Son of Zorn”, and Mark then appeared as Daniel ‘Pryce’ Wormald in four episodes of the critically acclaimed crime drama “Better Call Saul”, which follows the life of criminal lawyer Jimmy McGill before the events of one of the best series of all times “Breaking Bad”.

Mark went on to voice supporting characters in the action comedy “Comrade Detective” and the animated adventure “Apollo Gauntlet”, and he then portrayed various characters in 20 episodes of the action crime comedy “Decker”. The year 2019 saw him star as Colin Robinson in the fantasy horror comedy “What We Do in the Shadows”, while the following year saw him star as Randy Blink in the comedy “Dream Corp LLC”.

One of Mark’s most recent roles in a TV series has been in the 2020 episode “Idiot Inside” of the comedy “Black Monday”.

Mark also worked in the camera and electrical department for the 2009 documentary film “Winnebago Man”.

He received special thanks for the 2019 short documentary movie “The Buskers of Galway”.

Mark appeared in the 2014 TV special “The Second Annual ‘On Cinema’ Oscar Special”, and then starred in two documentary movies, “Asperger’s Are Us” and “Better Call Saul: Switch Table Read” in 2016. He’s also appeared in 20 episodes of the critically acclaimed comedy talk-show “On Cinema”.

Mark has been nominated for two awards.

Mark prefers to keep the details of his love life to himself, but it’s known that he has been married to his other half Amelie Gillette for many years now, however, neither of the two have disclosed the date of the wedding, nor how and where they met for the first time.

She studied at New York University, and during her time there wrote for the weekly student newspaper “Washington Square News”. She graduated with a Bachelor’s degree, and then moved to Italy to teach English. Since 2006, Amelie has been writing for the online newspaper “The A. V. Club”, and has also written episodes of various TV series, including “The Office” and “Animal Practice”.

Mark hasn’t spoken about any other women he has perhaps been with. so as of February 2021, he’s married to Amelie Gillette; they don’t have children.

He is keen on travelling, and has been all around the US with his other half, while the two have vacationed in Europe together on a number of occasions. Mark’s favorite place to visit is Las Vegas in Nevada.

Mark likes to read comedy books in his spare time – his favorite is “The Girl Who Saved the King of Sweden” by Jonas Jonasson.

He has his own favorite actors and actresses, some of whom are the late Robin Williams, Tom Hanks and Julia Roberts, and a couple of his favorite movies are “Patch Adams”, “Good Morning Vietnam!” and “The Terminal”.