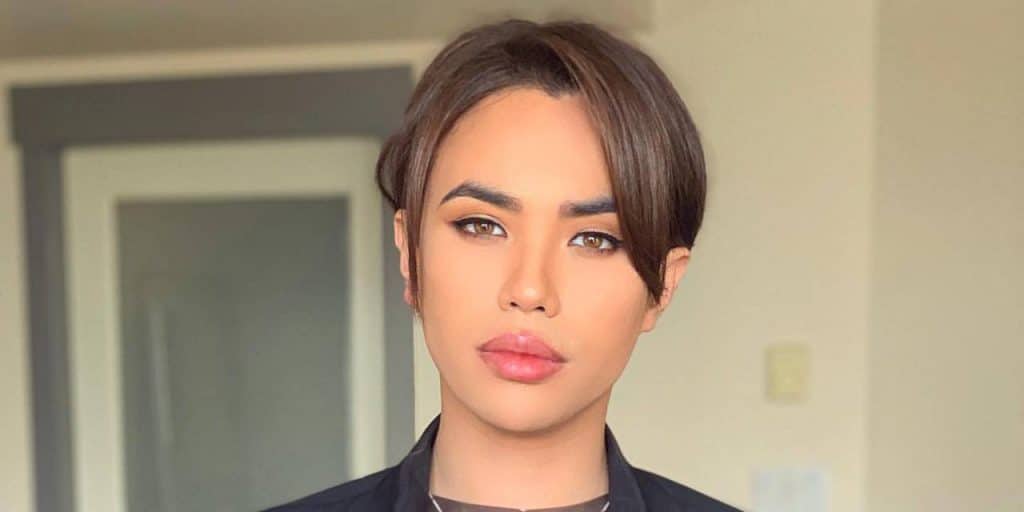 All Truth About JayR Tinaco: Men, Woman or Transgender?

JayR Tinaco has come a long way from his bartending days in Australia, to become one of the rising non-binary stars to grace our television screen. He easily stands out with his unique style and movie characters, which have helped him carve a niche in the film industry. So who is JayR Tinaco?

Tinaco JayR was born on 5 January 1989 in Manila, Philippines under the Capricorn Zodiac sign. He is an Australian by nationality with mixed ancestry of Filipino and Australian origin. He was raised in a Christian household though the names of his parents are still unknown. His family moved to the North-eastern part of Australia, Queensland, where he grew up. There is no little information about his siblings, if any, and what life was like growing up in Australia.

Details about where he attended high school are unknown but he once stated in an interview that he had a tough time during his school days because he was bullied for his appearance. Tinaco commented his interview with the magazine ‘Out’, on when he began to explore his gender orientation, from stating that it was as far back as his high school days when often the object of attack by the bullies. At this period in his life, he liked to try out clothing of both sexes, and didn’t think he was different from others until it was pointed out to him. He added that though he had a supportive mother and friends, there was hardly any day he didn’t get attacked, especially since he was from a small town. While most assaults were verbal, he got a few death threats, but survived all ‘til adulthood.

He later enrolled into the Australian Institute of Performing Arts for their master class. It is uncertain if he graduated, or was awarded any degrees from there.

Tinaco worked at bars before he started acting, employed in a hotel named ‘Steyne of Manly’ in Sydney before he got opportunities to work as an actor.

In the early stages of his acting career, Tinaco was advised by his agent to act more ‘straight roles’ which he later reported to ‘Variety’, that being a young actor he was compelled to listen to the advice because he wanted to succeed in the movie industry and land more roles.

He made his debut on-screen appearance in the 2009 TV series entitled “Home and Away”, appearing in two episodes as a student who was trapped.

This was followed by another feature in a sci-fi movie released in 2012, entitled “Your Life Again”. Two years later, he acted as a crossdresser in the movie “Show Boy”, and the following year he starred in a romantic movie entitled “Drown”. He continued to showcase his talent as an actor in movies such as “The Wake”, a comedy written by Joel Leigh. and also “Rake”, in which he featured as a guest in two episodes of the drama series.

Later in 2017, Tinaco left for Canada to continue his acting career, and a year later was cast alongside Elizabeth Ludlow, Tyler Hoechlin and Samuel Anderson in the 2019 Netflix series entitled “Another Life”. He went on to play the role of a non-binary medical practitioner who was a member of the Spaceship crew named “Salvare”; the role he played in the series was different because it wasn’t focused on sex or ‘coming out of the closet’.

His character ‘Zayn Petrossian’ is his most notable cinematic portrayal to date. The fiction written by Aaron Martin is centred around a crew’s mission to determine the origin of an alien substance, with Tinaco acting alongside renowned actors and actresses including  A.J Rivera, Blu Hunt and Katee Sackhoff. The movie was shown on Netflix on 25 July 2019, and is one of the most successful movies he has starred in. He later featured in Khan Nahnachka’s film entitled “Always Be My Maybe”, a comedy written by Randall Park, Ali Wong and Michael Golamco, in which he did an excellent portrayal as the host of a restaurant.

What is Tinaco’s personal life?

Many have speculated that he may be a transgender female, due to his choice of female fashion and make-up, but Tinaco is yet to clear the air of his orientation.

He stated in an interview that he identifies as non-binary, and prefers the pronouns they/them and him/he. His sexuality is still unknown, but since most non-binary individuals are attracted to men and women, many assume that he may be drawn to both.

He continues to keep his relationship details private, and hasn’t been linked to anyone in particular. He added that he is more focused on his career, with hopes of becoming more successful as an actor. There is no information on any past relationships, or if he has ever been married. He is believed to be single and living a relatively luxurious life in his house in Los Angeles, California.

Tinaco may be in the spotlight most of the time but he’s continued to live a drama-free life, not making tabloid headlines or been attached to any scandal.

When he is in the news, it’s usually attached to his movie appearance, or an LGBTQI+ cause which he is championing.

The hard-working actor is yet to have any awards or recognition linked to him, but it may not be too long before he joins the list of award-winning actors, especially with the unique roles he portrays, and appearances in successful movies such as “Another Life”.

When he is not on-screen, he loves watching movies starring his favourite actors, Robin Williams and Tom Cruise, and actresses Angelina Jolie and Whoopi Goldberg.

He loves to travel, especially to Paris, which is his choice vacation destination.

He is also a prominent member of the Hollywood gay community and advocates about matters concerning the community through his platforms on social media.

His favourite colour is black.

Tinaco is about 5ft7ins (1.70m) tall, and weighs about 155lbs (70kgs), with dark brown hair and complementary brown eyes.

He is said to wear a US Shoe size seven, loves fashion and is not afraid to make a bold statement with his outfits. He maintains his trim stature by regular exercise and maintaining a strict diet.

The young actor’s net worth has been estimated to be close to $300,000, accumulated through his acting career., and which is expected to increase as he takes on more acting roles in the future.

He is quite active on various social media platforms, especially on Instagram where he uploads posts about his lifestyle, advocacy and works to his over 14,000 followers through his account @jayrtinaco. He is also on Twitter and Facebook, with accounts on which he promotes his work as an actor and advocate of the LGBTQI+ community on his account of the same name.