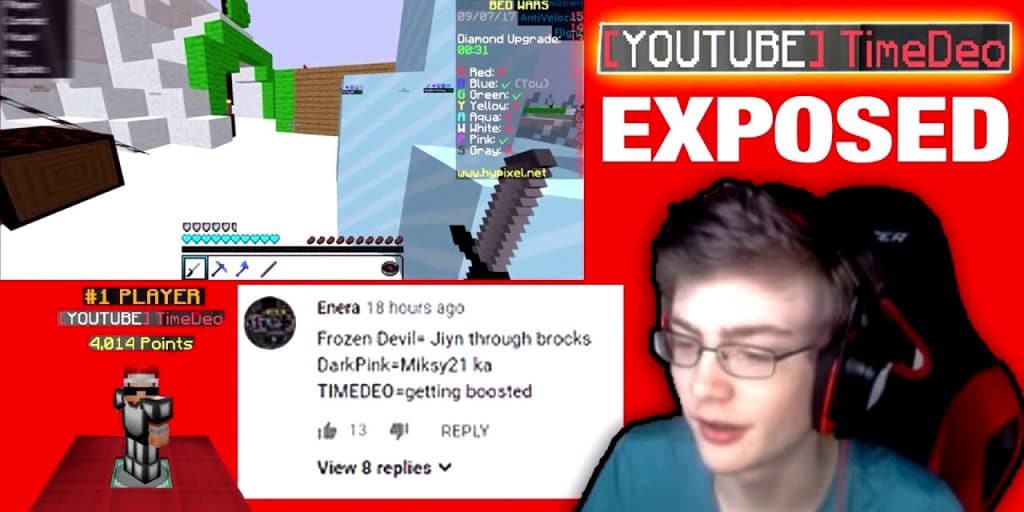 All You Need To Know About Youtuber TimeDeo – Biography 2021

TimeDeo is an American YouTube star, who achieved fame by uploading gameplay videos from the popular video game “Minecraft” and its various mods. He has created several video series, including “Top 5 Plays of the Week”, among others.

TimeDeo’s real name is Justin, but he hasn’t revealed his surname, though some sources claim that it’s Hobgood. He was born on 21 April 2001 under the Taurus zodiac sign, but he hasn’t shared where he was born, though he said that he grew up in Texas.

He hasn’t addressed the names of his parents, but has stated that he has a brother two years younger, although he hasn’t shared his name. Furthermore, his educational background remains a mystery.

From an early age, he became interested in video games and as he got older his interest was only increasing, which led to the creation of his YouTube channel when he was just 14 years old.

His first YouTube video entitled “Resource Pack Release + Map Download – 50 Subscriber Special”, was uploaded when he got actually achieved 50 subscribers on his channel, which now has over 95,000 views.

He continued to upload videos, slowly building his fan base by playing “Minecraft”, and creating the video series “Mini UHC Highlights”. However, these kinds of videos didn’t live up to his expectations, as they rarely reached thousands of views. Nevertheless, he continued his career, sharing more gameplay videos.

Gradually his popularity was increasing, and with his focus on the Hypixel server, he attracted more fans to his YouTube account. The “Bedware” mod content became his most popular, and he then created the series “Top 5 Plays of the Week”, which truly boosted his popularity. He currently has more than 360,000 subscribers on his official YouTube channel, while his videos have been viewed more than 35 million times.

Some of his most popular videos include “ALL 194 Fairy Soul Locations” with 3.2 million views, then “I Spent 700 hours acquiring level 50 (hypixel)”, over three million, and “I Bid 50,000,000 coins on the midas sword”, which has been viewed more than two million times, among numerous other videos that have more than a million views each, significantly boosting his popularity.

Since acquiring a decent fan base, TimeDeo has created another YouTube channel, Deo, which now has more than 70,000 subscribers, and the number is still increasing since it has become his main channel, having stopped uploading videos on his previous channel in mid-2020.

He continued with “Minecraft” gameplay videos, and he has acquired more than seven million views on this channel. Some of his most popular videos are “Loot from 1 year of a diamond minion”, which has over a million views, then “Im hax”, which has been viewed over 500,000 times, and “I mlg’d my 1bil midas sword”, with 315,000 views, in addition to several other videos that have further added to his popularity.

TimeDeo has also launched his Twitch channel, but it still doesn’t have any content on it, but has still attracted 16,000 followers.

You can find TimeDeo on Twitter as well, also sharing some of his career achievements with his 115,000 followers.

In May 2020, he teamed up with TommyInnit to form the Minecraft realm known as SMPInnit, and have since addded other YouTube stars, including Cyberonix, RudyInnit, Wisp, Thunder1408, Bitzel, and VoiceOverPete.

When it comes to his love life, TimeDeo hasn’t shared much about it, being more focused on his rising career, rather than finding a girlfriend. According to sources, he is currently single.

As of mid-2021, TimeDeo’s net worth has been estimated to be around $1.5 million, earned largely through his successful career as a YouTube content creator.

This popular YouTuber has light brown hair and blue eyes. He stands at a height of 5ft 7ins (1.7m), while his weight is unknown, though he has an average build. His vital statistics and shoe size are also unknown.

Although he spends much time indoors playing video games, TimeDeo also loves spending some time outside playing with his pet dog, and he also enjoys playing golf

He likes to read books, and his favorite is “Diary of a Madman”.

He is also a foodie, and enjoys fast food, not caring so much about his fitness and overall looks.

He’s listed Silver Pagoda as his favorite place to visit.