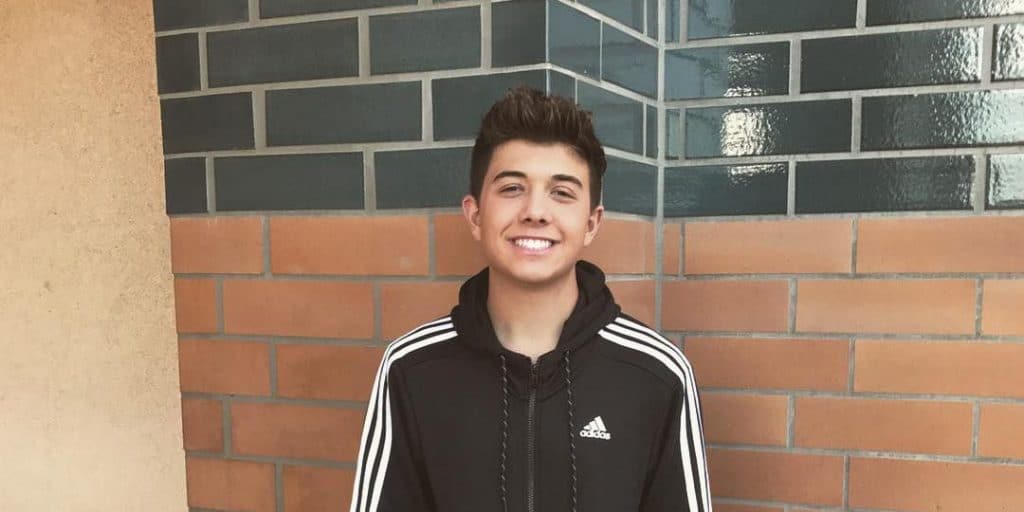 Bradley Steven Perry is an American actor, perhaps best known for his roles as Gabe Duncan in Disney’s “Good Luck Charlie”, and Kaz in “Mighty Med”. Having been active on the entertainment scene for about 14 years, Bradley Perry has become a force to reckon with.

Like millions of his fans worldwide, if you are interested in learning more about Bradley Steven Perry, read this biography to the end.

Bradley Steven Perry was born to Kimberly Perry and an unnamed father, under the zodiac sign of Sagittarius, on 23 November 1998, in Thousand Oaks, California USA. Bradley is of White Caucasian ethnicity, and holds American nationality.

Bradley’s parents raised him and his three older sisters – Caitlyn, Jessy, and Lee Perry (one of whom now has a son), in Southern California. Being the youngest in his family, Bradley received a lot of attention from his parents and sisters alike.

Bradley Perry has lived in California for the greater part of his life, excluding the times he traveled for vacations and work.

While filming “Good Luck Charlie”, he was homeschooled on set. The producers of the show provided teachers for the children who had to miss school.

In 2017, Bradley matriculated from the Oak Park High School in Quartz Hill, and subsequently started his college education at the University of Southern California.

The COVID-19 pandemic contributed to the extension of his college education, however, Bradley Steven finally graduated from the university on 22 May 2021.

Although Bradley is a star, he has successfully kept his family affairs private for the most part. He rarely posts their pictures, so helping them maintain low profiles. However, it is common knowledge that Bradley’s sisters are very supportive of him; he told Newsday that they had made sacrifices, each in their own right, all because of his career.

Bradley Steven Perry launched his acting career at age 10, with minor roles in “Choose Connor” and “Magnificent Max”, both released in 2008.

In 2009, he made his television debut as a guest actor in the crime drama “Without A Trace”. In the early stage of Bradley’s career, he played small parts in “The Goods: Live Hard, Sell Hard”, “Old Dogs” and “Opposite Day”, all in 2009.

Bradley Perry rose to stardom after his portrayal of Gabe Duncan in Disney’s sitcom “Good Luck Charlie” from 2010 through 2014, opposite Bridgit Mendler, Leigh-Allyn Baker, and Eric Allan Kramer. His acting in the series was so outstanding that he was nominated twice (2011/2012) for the Young Artist Award for ‘Best Performance in a TV Series- Supporting Young Actor”.

In 2011, he played Roger Elliston, who was Sharpay’s rival in “Sharpay’s Fabulous Adventure”, the spin-off from “High School Musical” (2006). A few years later, he landed the lead role as Kaz in “Mighty Med” (2014), a superhero comedy show, and reprised his role in its spin-off, “Lab Rats: Elite Force” in 2016, alongside Jake Short, Paris Berelc and William Brent.

Bradley has also worked a few times as a voice actor. He contributed his voice on “Peacock” (2010), in which he voiced Young John Skippa, and “Descendants: Wicked World” (2016-17), voicing Zevon.

Bradley Perry thinks Christopher Nolan is the greatest filmmaker of all time.

Bradley was in a romantic relationship with actress and singer Sabrina Carpenter from 2014 through mid-2015, when they broke-up. He has dated other people since then, but keeps his love life off social media.

At the moment, Bradley Perry’s relationship status is unknown to the public; he’s presumed to be single.

Romance aside, Bradley Perry shares a fantastic friendship with actor Jake Short, whom he met at a Disney softball game. They took to each other instantly and have now become best friends. Bradley and Jake are so close that they are sometimes mistaken for siblings – fans call them ‘Brake’, which is a combination of both their names.

Bradley is passionate about charity. He donates to the Mattel Children’s Hospital to provide treatment for children suffering from pediatric diseases. He also contributes to Toys for Tots, a program run by the US Marine Corps Reserve, which aims to bring alive the spirit of Christmas by distributing toys to less-privileged children.

In addition, Bradley is an active donor of the Make-a-Wish Foundation, an organization that brings to reality the wishes of children with life-threatening medical conditions.

Bradley Perry has short dark brown hair, and eyes of the same shade. He is 5ft 8ins (1.73m) tall and weighs about 165lbs (75kgs). Even though Bradley is now 24 years old, he still has a childlike personality that has endeared him to many people, both in and out of the entertainment industry.

On a regular day with friends, you can find Bradley dressed in plain tee shirts and jeans; comfort is his priority in fashion.

As of mid-2021, Bradley Steven Perry has an estimated net worth of $2 million, earned from acting and other personal endeavors. There are currently no details of property owned by the actor or other members of his family.