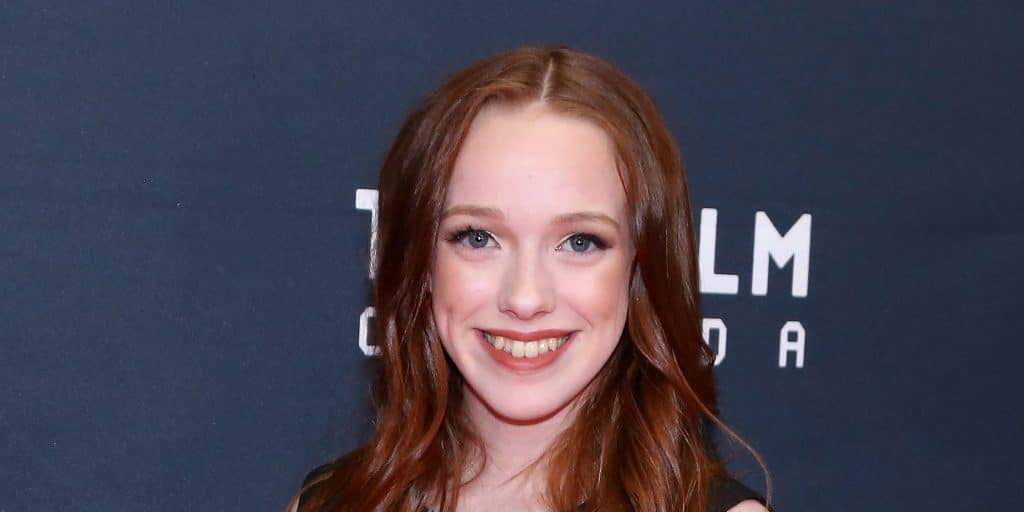 Who is Amybeth McNulty?

Amybeth McNulty is an Irish-Canadian award-winning actress, who is best known to the world as Anne Shirley in the TV series “Anne with an E” (2017-2019), and as Aine in the film “Black Medicine”, among several other roles that she has secured so far in her career.

Amybeth McNulty was born on 7 November 2001 under the Scorpio zodiac sign, in Letterkenny, County Donegal, Ulster Province, Ireland. Her father is Irish, while her mother Siobhan is Canadian, originally from Calgary, Alberta Canada.

As a result, Amybeth has dual Irish and Canadian citizenship. She spent her childhood in Letterkenny and was homeschool throughout her childhood. Amybeth started attending ballet lessons as a child. and made amateur stage performances at An Grianan Theatre, in musicals written and composed by Paul Boyd.

With experience on stage before her 14th birthday, Amybeth made her on-screen debut as Young Agatha Raisin in the TV comedy mystery-drama series “Agatha Raisin” (2014), starring Ashley Jensen, Matt McCooey and Mathew Horne.

The same year, she appeared in the short film “A Risky Undertaking”, while in 2015 she secured a couple of popular roles, including as Sputnik in the TV fantasy-adventure series “The Sparticle Mystery”, and as Jenny Rane in the short-lived drama series “Clean Break”.

Amybeth was slowly becoming more popular as an actress, and in 2016 she portrayed Morgan at 10 years old in the sci-fi horror film “Morgan”, with Kate Mara, Anya Taylor-Joy and Rose Leslie in the lead roles. Then in 2017, young Amybeth secured her most prominent role to date, as Anne in the TV drama series “Anne with an E” (2017-2019), based on L.M. Montgomery’s classic novels “Anne of Green Gables”.

She starred in all 27 episodes of the critically-acclaimed series, alongside Geraldine James and R.H. Thomson, and won several awards, including the Canadian Screen Award in the category for Best Lead Actress in Drama Series, among others.

Since the end of the series, Amy continued quite successfully, first as Aine in the thriller film “Black Medicine”, co-starring Antonia Campbell-Hughes and Orla Brady, and then as Vickie in the new season of the multiple Primetime Emmy awarded fantasy horror-drama series “Stranger Things”, joining the well-known cast of Millie Bobby Brown, Finn Wolfhard, Winona Ryder, and David Harbour.

Amybeth is currently working on several projects, including the drama film “All My Puny Sorrows”, starring Sarah Gadon, Alison Pill and Mare Winningham, which is currently in post-production and set for release late in 2021. Furthermore, the young actress is also working on the thriller film “Maternal”, in which she will star with Athena Karkanis, Ryan Kiera Armstrong and Megan Follows, who is also the director of the film, and which is at the moment in post-production, and yet to receive its release date.

Amybeth is also a YouTuber, and has her own channel with more than 670,000 subscribers.

She shares daily vlog videos with her fans, and has already collected more than 18 million views. Some of her most popular videos include “Riptide Cover 2018 Full Song”, which has around 4.5 million views, then “Q&A- 2019”, with 2.6 million views, and “Anne Season 2 – Behind the Scenes” with 1.3 million views, among numerous other videos that she’s uploaded onto her channel.

When it comes to her personal life, Amybeth has come out as bisexual in 2020, sharing the information with her fans on Twitter. However, she has been in a relationship with actor Louis Hynes for more than a year.

Louis is a London-based actor, best known to the world as Klaus Baudelaire in the TV series “A Series of Unfortunate Events” (2017-2019). Amybeth has often shared pictures of the couple on her official Instagram account from their various romantic adventures, including a visit to Niagara Falls.

As of mid- 2021, Amybeth McNulty’s net worth has been estimated at close to $1million, earned through her successful career as an actress, during which she has already appeared in 10 film and TV titles, all of which have increased her wealth.

This young actress has red hair and has sparkling blue eyes. Before she was cast as Anne, Amybeth had to undergo a teeth fix process to fit the outer look of the character that she portrayed. She stands at a height of 5ft 5ins (1.65m), weighs approximately 119lbs (54kgs), while her vital statistics are 29-22-31, bra size 34A.

The young actress has many hobbies that accompany her acting career. She is a dancer and loves ballet. She hasn’t pursued a dancing career, but has continued to practice dance. She’s also expressed her musical ability as she likes to sing, however, she hasn’t pursued a musical career either, but has shared her talents with her fans on YouTube, recording several cover songs.

She is a vegetarian, and refused a role in “Game of Thrones”, as she had to wear real fur.

Amybeth is a great adventurer, and loves spending time outdoors. When she isn’t working she enjoys hiking and kayaking. She loves to travel and has been to a number of destinations across her country, but has also visited several European countries, including Netherlands, and a few places in the US.