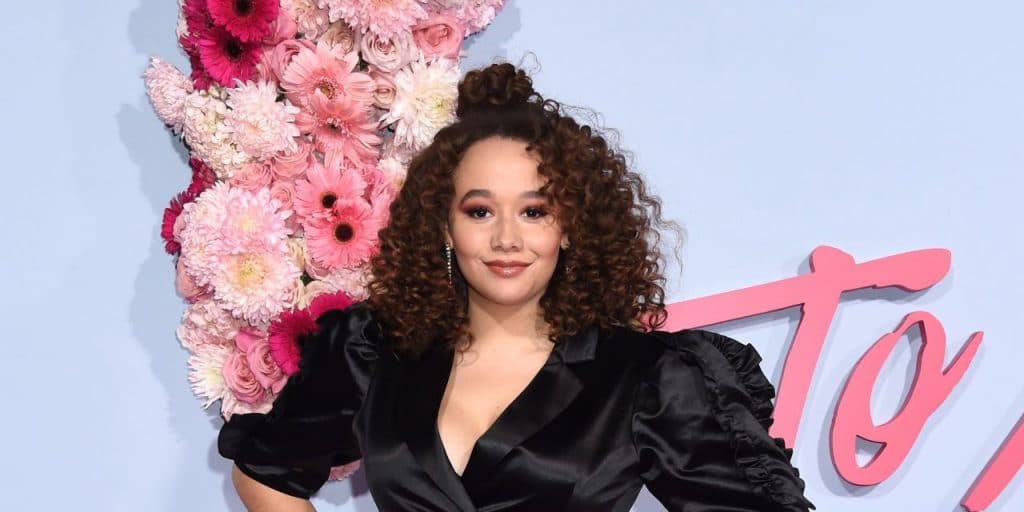 Talia Jackson is a young American actress and singer, who is popularly known for her role as Jade McKellan in “Family Reunion”. She’s been in the public eye since she was a child for a number of reasons.

Talia Jackson was born under the sign of Virgo on 28 August 2001, in Madison, Wisconsin USA, to international model Kelly Jackson and professional basketball player, Trent Jackson.

Being born  to a White Caucasian mother and an Afro American father, Talia is a bi-racial American woman.

At age seven, Talia was sure that she wanted to be in Hollywood. Her parents, having experienced first-hand the opportunities in the acting industry, supported her in the pursuit of her dreams. However, all was not well with the Jackson parents – a few years after the birth of their son, they went through a rough patch, and Kelly and Trent Jackson split in 2009, after 17 years of marriage.

Talia was 10 years old at the time, and it was a terrible experience watching her parents having arguments and eventually a custody battle. Her mother won custody of the children, with Trent having visitation rights. Following the divorce, Talia’s mother needed the support of her family in order to focus on her career, and help her children pursue their dreams too.

Subsequently, they moved from Wisconsin to Santa Barbara, California in February 2009. Talia Jackson’s educational background is not a sweet story; following the divorce and custody battle, she found it difficult to cope with schoolwork. As she told TeenVogue, ‘I was actually pulled out of almost every school that I was in as a child’.

Aged 13, Talia was diagnosed with anxiety and depression, a consequence of the aforementioned proceedings – the only thing that kept her sane was the acting gigs she landed, pouring her entire energy into her job.

Her younger brother Armani is also an actor, and has appeared in “Little Boxes” and “CHAD”.

The following years, she toured with Andrea Bocelli and David Foster as a singer for two Christmas seasons. She was also cast as Stella in “Disney English”, a program which put out several videos for children. She worked with the “Disney English” cast and crew from 2012- 2013.

She made her film debut in 2012, when she played Alexsia in “A Green Story”. Subsequently she appeared as Lisa in “A Snow Globe Christmas” (2013), and “Raised By Wolves” (2017) in which she played Dusty Gable. All she got at the time were minor roles, and she was on the verge of giving up on her acting career when she landed a role in “Station 19” in 2018, an American action-drama series created by Stacy McKee, playing Zoe in an episode entitled “Lost and Found” in the second season of the show.

Talia’s big break came in August 2018, when she was cast in “Family Reunion”, a drama by Netflix, alongside Tia Mowry and Anthony Alabi. She played the role of Jade McKellan, an insecure, fashion forward teenager and oldest daughter of Cocoa and Moz McKellan.

She recently started developing some projects for Netflix, and has collaborated with her brother to start a production company; hopefully, Talia soon discloses the projects she’s working on.

In recent times, Talia has started building a career in the music industry. She mentioned in an interview that she had always loved music, but didn’t start writing/recording until the lockdown of 2020. Her inspiration for “Hidden” was her trying to heal and separate herself from a toxic person that she was involved with. Then, she filmed the music video in Malibu Creek State Park.

In February of 2020, she released the new single “5FIVE”. Her most recent project entitled “You” was released on 14 May 2021, and has elicited mixed reactions from the media, but she seems to be doing a good job so far, and hopes to put out an album by the end of this year.

Apart from anxiety and depression which Talia was diagnosed with earlier on, she’s also been diagnosed recently with ADHD and OCD.

Following the release of “Family Reunion” on Netflix, she faced a backlash from Instagram users – their objections were that she was ‘too white’ to be in a mixed family.

The negative energy on social media affected her so much that she deleted her Instagram application. She revealed to Flaunt that her onscreen mother Tia Mowry was essential to her healing.

She also faced hard times in 2020 – in July that year, she was hospitalized for a liver and gallbladder infection, apparently caused by the constant influx of antidepressants into her system.

This led Talia to abandon medication for a while, and turn to other ways to manage her mental health. She relied on spirituality, and learned to enjoy her own company.

Talia Jackson  is 5ft 3ins (1.6m) tall, and weighs about 117lbs (53kgs). She has curly brown hair and black eyes. At 19 years old, Talia has the potential of becoming a fashion icon. She has come into a style of her own, even looking fashionable in non-designer outfits. She alternates between elegant dresses and hoodies with a pair of sweatpants.

Talia has a semicolon tattoo with an underlying message about suicide prevention.

Talia’s net worth is estimated to be around $300,000. She has a house in Palm Desert, and goes there when she needs time alone. The worth of the property is unknown at this time.