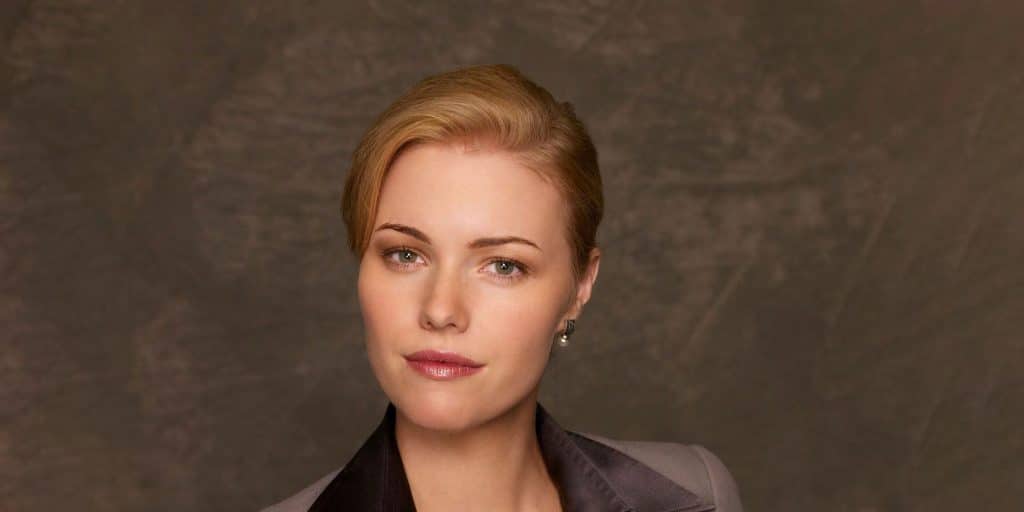 Melissa Sagemiller was born in Washington, D.C., USA, on 1 June 1974 – her zodiac sign is Gemini and she holds American nationality. She is an actress who might still be known best for her portrayal of Emily Thomas in the 2006 action adventure film “The Guardian”, written by Ron L. Brinkerhoff, directed by Andrew Davis and which starred Kevin Costner, Ashton Kutcher and Sela Ward. It follows a teenager who finishes high school as a swim champion, and then joins the US Coast Guard School at which he is taught about love and loss by the swimming legend Ben Randall. The film won one award and was nominated for four others.

Melissa was raised as an only child in Washington D.C. by her father Charlie Evans who was a professional Football player, and her mother Donna Sagemiller who was a political activist and a comptroller.

Melissa became interested in acting while still attending elementary school, and appeared in her first play “To Kill a Mockingbird” aged nine, after which she could’ve been seen in nearly all the plays performed at her school. She was also an avid dancer, who began taking dance lessons aged three. She was mostly focused on tap dance and ballet at first, but soon started practicing modern and jazz dance as well.

Melissa went on to study at Georgetown Day School, and was noticed by a modelling scout only a couple of months after enrolling. Modelling took over acting, as she stopped appearing in plays but still decided to pursue a college degree, and thus after matriculating in 1992, she enrolled at the University of Virginia, obtaining her undergraduate degree in art history. Melissa then decided to study acting at the Stella Adler Conservatory, and after a year there moved to New York University’s Stonestreet Studio. She eventually started practicing at Michael Howard Studios.

Before launching her acting career, Melissa was featured in a number of magazines such as “Maxim” and “Gear”.

Melissa made her debut film appearance in the 2001 romantic comedy “Get Over It”, written by R. Lee Fleming Jr, directed by Tommy O’Haver and which also starred Ben Foster and Kirsten Dunst. It follows a boy who feels depressed after his girlfriend breaks up with him – it was nominated for four awards.

A couple of Melissa’s following roles were in the 2002 comedy “Sorority Boys”, the 2003 romantic horror drama “Love Object” and the 2004 mystery thriller drama “The Clearing”. In 2005, Melissa was cast to play Claire in the comedy “Life on the Ledge”, written and directed by Lewis Helfer who also starred in it alongside Melissa and Tovah Feldshuh. It follows Brian who, after learning he has a tumor, decides to start talking to a girl who comes to see the same psychiatrist as him.

The year 2007 saw her star as Tracy in the romantic comedy “Mr. Woodcock”, and in 2010, Melissa starred as both Nicole and Pamela in the short romantic comedy “In Fidelity”, and as Beth Davenport in the TV drama “The Rockford Files”.

Melissa hasn’t been active in the film industry since 2014, but hasn’t officially retired either. It’s believed that she is currently focused on raising her children.

Melissa made her debut TV series appearance in the 2005 episode “When Darkness Falls” of the mystery crime drama “Without a Trace”, but only gained recognition after being invited to portray Gayle Bishop in the crime thriller drama “Sleeper Cell”, created by Ethan Reiff and Cyrus Voris, and which starred Michael Ealy, Oded Fehr and Henri Lubatti.

The series follows an FBI agent tasked with infiltrating a terrorist organization that wants to attack Los Angeles, and was a hit, winning four awards while it was nominated for 13 others.

In 2008, she was cast to star as Michelle Ernhardt in the drama “Raising the Bar”, which also starred Mark-Paul Gosselaar and Gloria Reuben, and follows two law school friends who meet again in court representing opposing clients. Melissa’s following notable performance was in 11 episodes of the critically acclaimed mystery crime drama “Law & Order: Special Victims Unit”, between 2000 and 2011. The following years saw her appear in single episodes of various series such as the action drama “Chicago Fire”, and the action crime drama “Chicago P. D.”.

Melissa’s most recent role in a TV series was in the 2014 episode “Last Call” of the action crime drama “Person of Interest” in which she portrayed Sandra Nicholson.

Melissa has been nominated for a single award: a 2005 Chainsaw Award for Best Supporting Actress for her performance in “Love Object”.

Melissa prefers to keep her personal matters to herself, but it’s known that she’s been married to Alexander D. ‘Alex’ Nesic for over a decade now.

Alex was born on 17 April 1976, in Santa Barbara, California – while he’s of French and Serbian descent, he holds both American and French nationality. He graduated from Santa Clara University with a Bachelor of Arts degree in European history, and then decided to become an actor. He’s appeared in various movies and TV series, while his most notable performance has been in the series “Sleeper Cell”, which is also how he met Melissa.

Alex asked Melissa to marry him in July 2006, but they have to this day kept the date of their wedding a secret. They have two children together, and are keeping them away from the media’s attention.

Melissa hasn’t talked about any other men she might have dated a,nd as of January 2021, she is married to Alexander Nesic.

Melissa is a huge fan of all kinds of art, while her favorites are painting and photography. Photos of some of her work can be found uploaded onto her Instagram account.

She is a philanthropist, and is interested in doing charity work. Melissa is one of the women who have accused the former American movie producer Harvey Weinstein of harassment and sexual assault, and contributed to his conviction.

Harvey Weinstein ‘survivors’ were awarded a $19 million settlement. Since then, she has worked with various organizations which aim to prevent these kind of things from happening.

Melissa is a fashionista who is trying to keep up with the latest fashion trends, and is a shopaholic, as she goes shopping for clothes multiple times each week.

She has her own favorite actors and actresses, some of whom are Ryan Reynolds, Johnny Depp and Julia Roberts, while a couple of her favorite movies are “The Notebook”, “Edward Scissorhands” and “Notting Hill”.