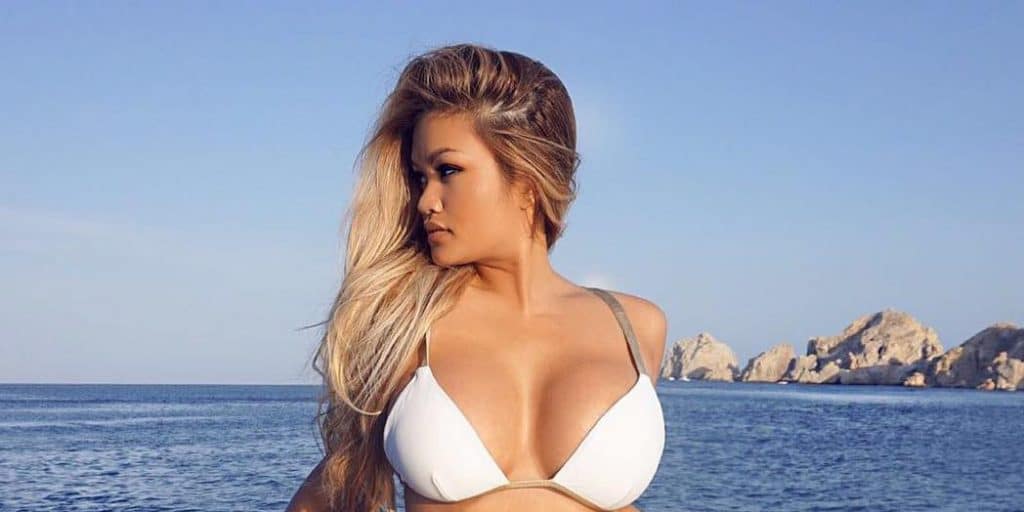 Jojo Babie is the pseudonym of an Asian-American social media influencer, Instagram model and adult content creator. Due to her curvy figure and the style of pictures she posts, she has been dubbed by tabloids the “Jessica Rabbit of Social Networks”.

Jojo Babie’s real name is Jojo Von Southi; she was born on 7 November 1988 in Kansas, USA. Details about her parents, such as their names and occupations are not publicly known; she has a brother, but his name and age are also unknown. In one of her Instagram posts, Jojo shared a picture of her mother, wishing her a happy mother’s day and thanking her for moving to the US from Laos.

Her mom was working any job she could get so she would be able to raise Jojo and her brother, as they were very poor. She has never mentioned her father, so he probably didn’t have a part in her early life. During her school years, Jojo was a lonely child with few friends, and was a victim of bullies. At one point during her early life, Jojo’s family moved to California to help Jojo in reaching more options, and support her in her dream of becoming a fashion model.

Details about Jojo’s education are not publicly known, except that she matriculated from high school, but whether she enrolled at a university, and what she could have studied if she had, isn’t known.

Jojo started modeling sometime in 2013. She launched her Instagram account with the username @jojo_babie which had less than a thousand followers in the first several months. Her dedication, and posting content on a daily basis proved to be worth the effort, and she soon started to count followers in the hundreds of thousands. She began making sponsored posts and endorsing brands.

Her page eventually grew enough for her to gain the courage to try her luck as an entrepreneur. She owns an e-commerce website. and mostly promotes her affiliate brand “1st Phorm”.

Jojo seems to have mastered the art of using her physical appearance to market any product she chooses; she’s been promoting luggage brands, clothing and laundry brands. Her brand’s motto is “Your Favorite Asian Girl”.

A few years ago Jojo launched another social media account, her OnlyFans profile.

The main idea of OnlyFans is to share the adult type of content in a safe environment, and be able to earn money from it directly by fan donations. Jojo’s OnlyFans account currently has over 60,000 likes, with monthly subscription from $15.

Jojo keeps a tight lid on her private life, and doesn’t share information very freely. Due to the nature of the work she does, she’s been a victim of numerous trolls and gossip blogs. It was speculated that she’s been dating numerous men, but she’s never confirmed or denied the rumors.

On one occasion in 2011, Jojo posted a tweet to her personal Twitter page in which she wrote about how much she missed her boyfriend, as they were in a long-distance relationship at the time. It’s not known if the couple is still together, if they have progressed in their relationship.

Jojo is very active on Twitter, launching her account back in 2010. She regularly posts pictures and interacts with her over 50,000 devoted fans.

Jojo is also very active on Facebook, having amassed two million followers since she launched her account.

It seems that the part of Jojo Babie’s appeal, apart from her stunning looks is how mysterious she is.

She seems like someone who looks pretty but is an empty shell when it comes to intellect. However, many would beg to differ, as Jojo is practically a self-made millionaire. She’s made a barrier between herself and her audience in an effort to protect herself.

In her spare time, Jojo loves going to the gym, binge-watching TV series, but also being outdoors.

She really does not care about what people think about her, just as long as she likes herself. Her life philosophy is “At the end of the day the most important thing in life is happiness.”

Her most prominent physical features are her curves, long bleached blond hair and her round face.

She has admitted to undergoing cosmetic surgery in an attempt to perfect her appearance, however, she didn’t say which procedures she had done. She has said that she was always self-conscious about her body and how others perceived it. Even though she has been open about doing plastic surgery, she is still a firm believer in the powers of exercising. She works out five times a week, lifts weights, and does various types of cardio.

When it comes to her clothing style, Jojo always chooses slim-fitting outfits. Her style is provocative and revealing.

According to the TV Show Star, Jojo Babie had made anywhere between $16,500 and $28,100 per one Instagram post. Knowing the fact that she has produced at least 200 sponsored posts so far, and the income she makes from the OnlyFans website is not hard to approximate her net worth. Jojo Babie’s net worth has been estimated to be around $3 million as of 2021.