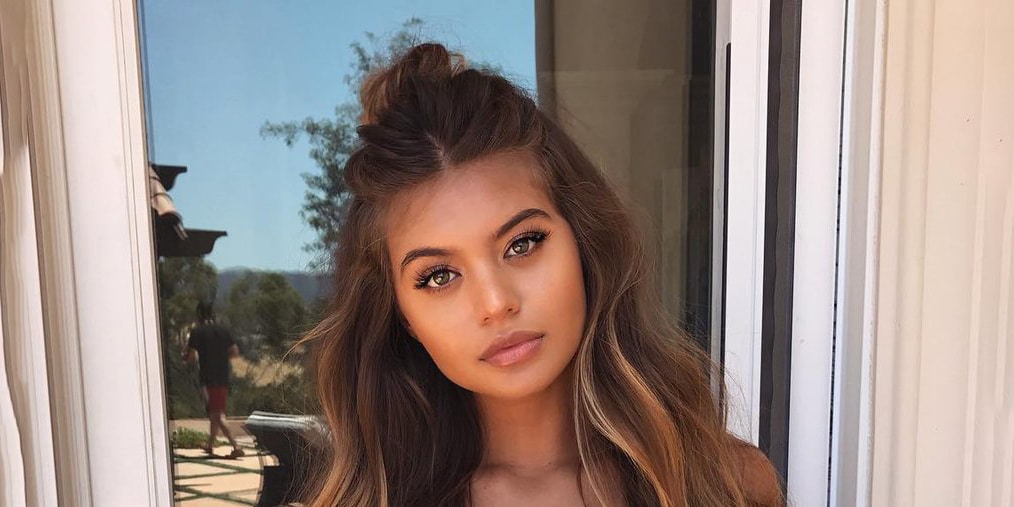 Who is Sofia Jamora?

Sofia Jamora was born in Calabasas, California USA, on 6 May 1997 – her zodiac sign is Taurus and she holds American nationality. She is a model, actress and a social media star, perhaps known best for her Instagram account which is today followed by more than 2.8 million people, and on to which Sofia has uploaded around 110 pictures, mostly focused on her breasts and buttocks.

Sofia was raised in Calabasask and while she hasn’t shared any details concerning her parents with the public, it’s known that she was raised by a single mother. As she hasn’t mentioned any siblings, it’s widely believed that Sofia’s an only child.

She began dreaming about becoming a famous model while still attending elementary school, and thus became physically active, and started paying attention to what she ate. Sofia became even more interested in the modelling industry upon enrolling at a local high school, and it was during her senior year that she was noticed by a modelling scout, and signed her first contract. Upon matriculating in 2015, Sofia decided not to pursue a college degree, but to focus on her career as a model.

Sofia was shopping in Westlake when noticed by a scout of Frankies Bikinis, which signed her a couple of days later.

She went on to pose for various brands including Love Piper, and it was in 2014 that Sofia launched her Instagram account and eventually became famous on the internet. She soon found herself modelling for the brands Tobi, Windsor and Oh Polly, and then signed a contract with Next Models. The year 2016 saw her sign with Los Angeles’ Freedom Models, and in 2017 Sofia walked the catwalk during the Miami Swim Week. On 12 April 2018, she was featured in the music video “Let Me” by Zayn Malik, and she also appeared in his video “Entertainer”, uploaded onto YouTube on 23 May 2018.

She is active on various social media networks besides Instagram. In November 2012, Sofia launched her Twitter account, which is today followed by around 65,000 people. She has a Facebook page followed by around 35,000 fans, while Sofia seems to be more active on TikTok, on which she’s followed by more than 1.5 million people, and has garnered over 12 million likes of all her videos combined.

In 2015, Sofia was in a relationship with Kyle Kuzma, a professional American basketball player currently playing for the Los Angeles Lakers competing in the National Basketball Association (NBA), but the two dated for only a couple of months before splitting ways.

She went on to date Spencer Mow, an Instagram star who seems to be known best for being close with the Kardashians. The two were together for a couple of years, but the exact date of their split isn’t known.

Sofia is today in a relationship with Jaxson Hayes, a professional American basketball player currently playing for the New Orleans Pelicans of the NBA. They’ve uploaded several pictures featuring themselves together onto their Instagram accounts, and it appears as the two have started dating just recently.

As of March 2021, Sofia is dating Jaxson Hayes, hasn’t married and doesn’t have children.

Sofia’s favorite season is summer, as she enjoys sun tanning, swimming in the ocean and playing beach volleyball. She also loves to show-off her body at the beach.

She likes having a luxurious lifestyle, and can be seen staying at some of the most expensive hotels, eating at expensive restaurants and wearing luxurious jewelry.

Sofia’s a dog-lover – her favorite breed is Dalmatian, and she has a pet dog which can be seen featured in some of her Instagram pictures.

She’s physically very active and has a couple of training sessions at the gym each week, while she’s mostly focused on doing exercises for her abs and glutes.

In her spare time which is usually late at night, Sofia enjoys watching romantic movies – her favorite actor and actress are Ryan Gosling and Kate Winslet, while a couple of her favorite movies are “The Notebook”, “Titanic” and “Dear John”.

Who is her boyfriend Jaxson Hayes?

Jaxson Reed Hayes was born in Norman, Oklahoma USA, on 23 May 2000 – his zodiac sign is Gemini and he holds American nationality.

He was raised alongside his three siblings Jillian, Jonah and Jewett, by their mother Kristi who played college basketball at Drake University and was a Missouri Valley Conference Player of the Year, and their father Jonathan Hayes who was a professional American Football player competing in the National Football League (NFL), while he is today the head coach of the St. Louis BattleHawks competing in the professional American football league XFL.

Jaxson became interested in basketball while attending Moeller High School, and from his first day there to his final day, Jaxson grew from 6ft (1.83m) to 6ft 11ins (2.1m). He entered the 2018 Junior International Tournament in Milan, Italy with Team Ohio, helping them win their fifth title. Upon matriculating in the same year, Jaxson was offered scholarships from several universities, and chose to enroll at the University of Texas, however, after only a year there, he dropped out to make himself eligible for the NBA draft.

He was the 8th overall pick, drafted by Atlanta Hawks on 20 June 2019, however, they traded him to New Orleans Pelicans later on 7 July. Jaxson played his debut NBA game on 10 October 2019 against the Golden State Warriors in which he scored 19 points, but the team still lost by 11 points. He achieved his first double-double on 17 November when he scored 10 points and 10 rebounds, again against the Golden State Warriors. The Pelicans won a game against the Portland Trail Blazer on 18 November and on 5 December, they lost to the Phoenix Suns. In January 2020, the team won against the New York Knicks and only a day later, they were defeated by the Boston Celtics by 35 points. The rest of the year was disrupted by the covid virus, but the 2020-21 season is now well under way.