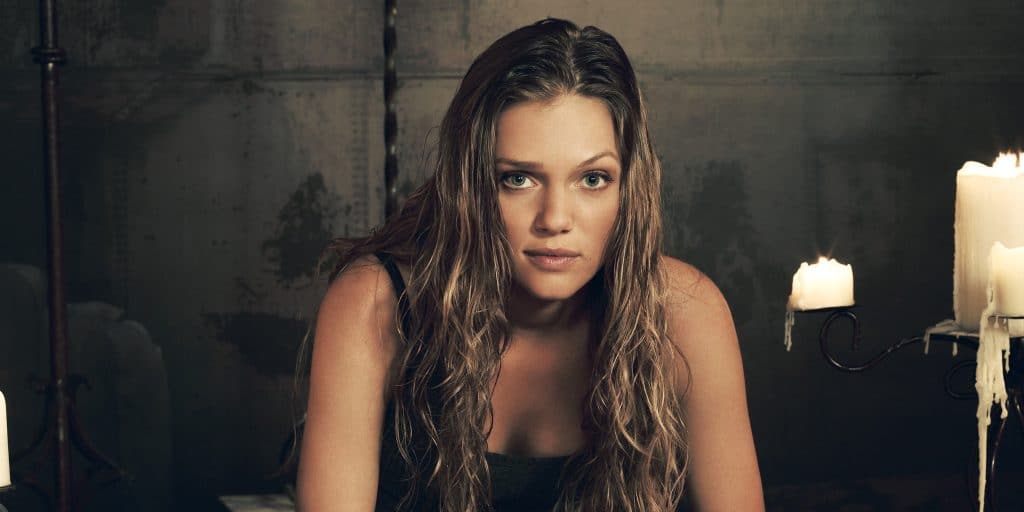 Tracy Spiridakos is a Canadian actress, probably best known for playing the role of Becky Richards in Teletoon children’s comedy series, “Majority Rules!”. She also played a lead role in “Revolution”, which made her a global star.

Keep reading to get the low-down on one of Canada’s most popular actresses.

Tracy Spiridakos was born on 20 February 1988 under the Pisces zodiac sign, in Winnipeg, Manitoba Canada, to parents of Greek origin, George and Anastasia Spiridakos. George hailed from a village called Grammousa in Skala, while his wife was born in Athens.

When Tracy was four years old, her parents relocated the family to her father’s hometown, Skala, in Greece, where she and her two brothers lived in Skala for five years until the Spiridakos’ returned to Canada in 1992. Upon their return, George and Anastasia set up a restaurant where they specialized in Greek cuisine.

Although Tracy Spiridakos holds Canadian nationality, she is proud of her Greek origin, and speaks the language fluently.

Once it was clear to Tracy that she would become a professional actress, she studied at the Actors Training Centre of Manitoba. She also worked part-time at her parents’ diner. However, in 2007 she moved to Vancouver, British Colombia, to pursue her passion full-time.

It appears that Tracy’s brothers lead private lives; hence there’s no picture of them on her social media page.

A few weeks after Tracy moved to Vancouver, she landed her first television role, appearing as a nurse in a single episode of “Supernatural”,. Subsequently, she landed other minor roles in television dramas including: “Aliens in America” (2007), “The Secret Lives of Second Wives” (2008), and “The L Word” (2009).

Tracy landed her first lead role in “Majority Rules!”, a Canadian children’s comedy series which aired on Teletoon from 2009 through 2010. She played Becky Richards, a fifteen year old whose life changed dramatically upon her election as the Mayor of her hometown, Mayfield, a role which made her famous in the industry.

She made her film debut in 2011, playing the role of the party girl in “Rise of the Planet of the Apes”. Two years later, she played the role of Hayley Jones in “Kill for Me” (2013).

However, Tracy continued to make major hits in television drama, where her focus was centered.

In 2012, the actress landed a lead role in “Revolution”, an American post-apocalyptic science fiction, playing Charlie Matheson, the feisty survivalist trying to keep her family together after ‘The Blackout.’ She was cast opposite Billy Burke, Anna Lise Phillips, and Elizabeth Mitchell, and according to Winnipeg Free Press, her appearance in the television drama was a ‘revolutionary career step.’ In the first season of the show, her performance earned her a Saturn Award Nomination for Best Actress on Television.

In 2015, Tracy joined the cast of “Bates Motel” playing the role of Annika Johnson, a prostitute.

Tracy then landed a recurring role in NBC’s “Chicago P.D” in its fourth season, playing Detective Hailey Upton; in its fifth season, she became part of the main cast, and has been a regular on the show since 2017 to date.

She reprised her role in other productions of the Chicago Franchise: “Chicago Med” and “Chicago Fire” both in 2018, and “FBI” in 2020. Hopefully, she lands more lead roles soon.

The only romantic relationship Tracy Spiridakos ever let go public was with actor Jon Cor. They met on the set of “The Boy She Met Online” and started dating soon after. They were together for a while and shared the news of their engagement in 2012, but within a year, they called off the engagement for reasons undisclosed.

Sometime in 2014, Tracy was rumored to be dating singer Justin Ruane, which was confirmed when she featured in his music video, “Who’s The One” in 2015. They might have dated for a while but are no longer together.

The actress leads a private life and is yet to reveal any new love interest.

Although Tracy has an Instagram account with over 380,000 followers, she hardly talks about her personal life, keeping the content light, including updates on films she’s working on, birthdays, mothers’ and fathers’ day wishes.

Tracy appears to share a strong bond with her parents. When she first starred in “Majority Rules” for Teletoon, George and Anastasia would air the show for customers at their restaurant, Olympia Diner. Sadly, George passed away a few years ago.

The actress is very vocal about her passions. In August 2014, she participated in the Ice Bucket challenge which Patrick Quinn started to create awareness about Amyotrophic Lateral Sclerosis, a disease of the nervous system. The challenge helped raise $115 million, which went towards medical research.

The 33-year old actress now lives in Chicago with her Rottweiler, Nala.

As per her clothing style, she likes to dress in simple yet stylish outfits. Sometimes, she may step out in long, classy dresses, while some other times you can find her in sweatpants and hoodies.

Having been active since 2007, Tracy Spiridakos has had ample time to amass wealth. As of mid-2021, her net worth is estimated to be $5 million. Details of properties belonging to the actress remain unknown to the public.