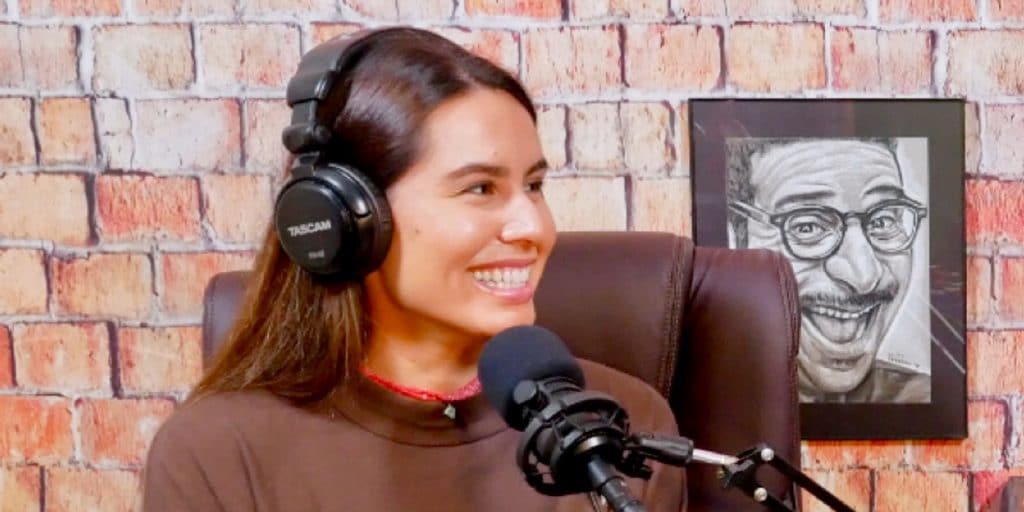 Have you heard about Khalyla Khun?

Khalyla Kuhn is often only recognised as being the wife of popular comedian Bobby Lee, but coming from a humble background where she did menial jobs for support to co-hosting a popular podcast, the internet sensation has also done quite well.  So who is Khalyla Khun?

Her early life and childhood

She was born Khalyla Shangra Kuhn on 31 October 1984 under the Scorpio sun sign, in Cebu, Philippines. She is now American by nationality with a mixed ancestry – her father’s identity is yet to be revealed, but he’s said to be Egyptian, while her mother, Marites Kuhn is Filipino.

Khun was raised with her sister, Julianna Kuhn, solely by her mother before they migrated to the US for greener pastures.

As a child Khun dreamt of becoming a doctor, and used to care for injured frogs and birds. After high school, she enrolled into an undisclosed university in the Philippines to study Biochemistry, and afterwards began lecturing students in basic medical sciences. She also did odd jobs such as selling street food and working in restaurants to support herself.

On arriving in the US, she continued to support herself while searching for better job opportunities.

Her marriage to Bobby Lee and children

Although her marriage to Bobby is still unconfirmed, her popularity has skyrocketed, and many people have become more interested in her activities since she became linked to him.

A source named ‘Checkersaga’ claims that the two were married in 2016 at a private gathering in New York, even though both still label themselves as boy and girlfriend. Their marriage has continued to remain shrouded in mystery, leaving fans guessing at their true status.

Another reason which makes their union quite interesting to his admirers is the fact that Bobby, with his active social life, has never been linked romantically to anyone else. Rumours about his sexuality had already surfaced before they were quieted down by his alleged marriage. Robert Young Lee Jr, a.k.a Bobby Lee, was born in California, USA, on 17 September 1971, to parents Robert and Jeanie Lee.

He was educated at Poway High School, and later enrolled into Palomar College, but dropped-out and went to work as a waiter in San Diego before venturing into comedy.

Bobby had his first performance at ‘La Jolla Comedy Store’ in 1994, and soon started getting steady gigs. Although his parents didn’t support his newfound career and wanted him to join their line of trade, he continued his comedy, and then went into acting, making several appearances on MADtv which went on for almost 10 years. As his career blossomed, so did his fame and he has since featured in successful films such as “The Dictator”, “Harold & Kumar, Go to White Castle”, “Love”, “P.I” and “Magnum”.

The actor struggled with marijuana, methamphetamine and heroin addiction, and by the age of 15 had had three failed attempts at rehabilitation. He finally got free from his meth addiction when he was 17, but he is currently going through rehabilitation for alcoholism.

In 2013, Kuhn and Bobby met on the dating site Tinder, according to Distractify, and later went on a date at Long Beach, Kuhn’s residential area at the time. They continued seeing each other and began a relationship in 2016, but continued to keep it away from the public eye.

Both Kuhn and Bobby host their podcast named ‘TigerBelly’, which was launched in 2016; it covers a wide range of issues such as politics, culture and entertainment.

Several prominent individuals including fellow actor Jordan Peele, have appeared on the show to air opinions on these issues to their over 250,000 subscribers. The podcast, which goes live on Thursdays on podcast-supported apps, has garnered almost 500,000 subscribers on YouTube, amassing over 80 million views. Their video with the highest views is “Hila and Ethan Klein of H3/ TigerBelly145”, watched over 700,000 times.

The couple lives together in California with their pet dog; they don’t have children.

It may seem that Kuhn enjoys being the centre of controversy, with several unconventional remarks she makes, from referring to her husband as her ‘first lesbian boyfriend’ to bragging about her former lovers, and wanting an open marriage with her husband.

She came under fire in 2018 for a comment she made on their show about only wanting to marry her husband because of his money, and that she would have left him if he was broke. The statement angered fans of the popular comedian, and they didn’t hesitate to express their disapproval towards her, tagging her to be a ‘gold-digger’ and ridiculing her for some time. She later apologised and explained through her Twitter account that she was already financially stable, with a decent job and a comfortable beach home all before she turned 17. She stated that she was saddened that all her accomplishments were reduced to a misunderstood joke.

About a year later, Kuhn was a subject of a cheating scandal, after an athlete by the name Brendan Schaub, revealed that he didn’t believe how the beauty was drawn to her husband.

He said that he believes humans first get attracted to each other physically before getting to know themselves. Brendan and Kuhn are alleged to have been exchanging messages on Twitter which made her husband uneasy, but the incident quietened down, and both stated that the chats were purely based on business.

Aside from being a media sensation, Kuhn loves to swim, and at the age of six had already joined her home country’s team to represent them in swimming competitions.

She is also a conservationist, and loves to create awareness about the environment, urging people to treat the ocean and earth generally with respect, because everything is interconnected and we depend on each other.

The Filipino star is an avid fan of fighting, especially Mixed Martial Arts, and dedicated a section on her show in 2019 to rate the most attractive boxers.

She has a rescued dog named ‘Gobitron’, and encourages her fans to also provide homes for stray dogs.

She also enjoys boating, taking walks in nature, but going on vacations to luxurious locations.

The gorgeous celebrity has a body which draws attention. She stands at a height of 5ft 6in (1.68m) and weighs about 125lbs (57kgs). Khun has a tattoo on her arm which is representative of her cultural heritage, and then a dragon at her back which she got in Las Vegas at 16 after visiting her sister.

New episode with the wonderful better half of #TigerBelly, @Khalamityk! She comes prepped and ready to become the most-heavily-shitted-and-pissed-on-by-a-goblin in a single episode. https://t.co/iR1t00Hapb pic.twitter.com/t0Xne5hQgK

She once tattooed her crush’s name on her wrist after losing a bet to him in Vegas, but has since had it artistically covered up.

Her net worth as at 2019 was estimated to be over $1 million, largely from her collaboration with her husband on their podcast. Her husband’s net worth is also rumoured to be a similar figure – they both enjoy an exotic lifestyle.

Kuhn is very active on her Instagram account @khalamityk, on which she shares photos of dogs, nature and also her lavish living with her more than 220,000 followers. She also engages her 15,000 followers on Twitter through her account of the same name.