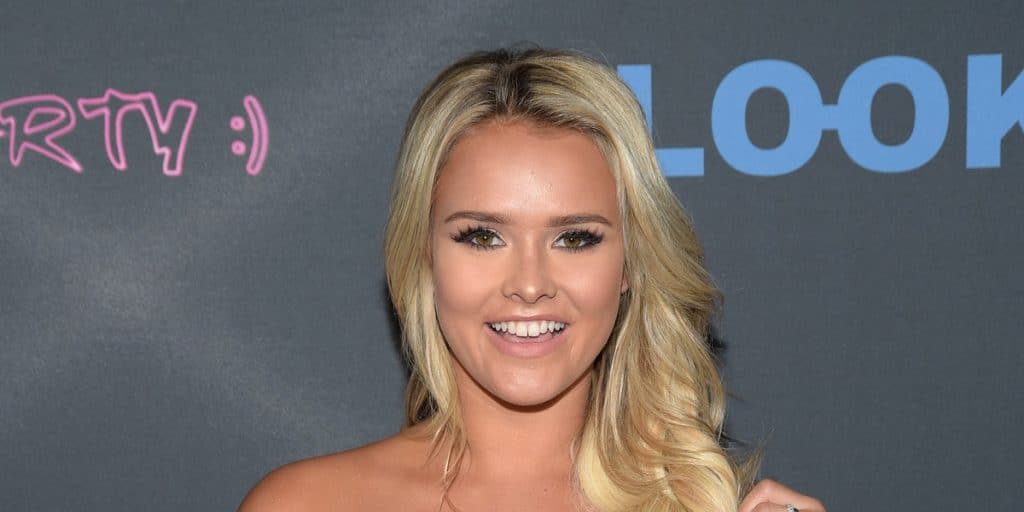 Who is Kinsey Wolanski?

Kinsey Wolanski was born in Sacramento, California USA, on 30 August 1996 – her zodiac sign is Virgo, and she holds American nationality. She’s a model and an actress, but who’s perhaps known best for being the ex-girlfriend of VitalyzdTV (Vitaly Zdorovetskiy), a Russian-American YouTuber and social media star.

Kinsey was raised in Sacramento alongside her younger brother by their parents, about whom nothing’s known, as the two respect their privacy.

She became interested in modelling while attending a local high school, and was encouraged by both her family and friends to pursue it as a career. Kinsey began sending her photos to modelling agencies when aged 16, which was also when she signed her first professional contract.

She has since posed for various popular brands and magazines, and has been featured on the cover page of “Sports Illustrated”, “Maxim” and “FHM”.

During her high school years, Kinsey was interested in sports, and was a cheerleader. Upon matriculating in 2014, she focused on her career, and didn’t enroll at college.

Kinsey made her debut film appearance in 2019, with her portrayal of Brittany in the horror “Slasher Party”, which starred her ex-boyfriend Vitaly Zdorovetskiy, Antonio Ramos and Simona Dimov, and follows a group of social media stars who are attending a party in Hollywood Hills, and are being killed one by one by a masked killer.

Just recently, in early 2021, Kinsey portrayed Annie, in the comedy film “Ass Clowns: Constipated”, written and directed by Charles Arthur Berg, who also starred in it alongside Pat Leborio and Deven MacNair. It follows Froggie, a man in his 40s, who’s in search of love.

Kinsey’s currently shooting for the upcoming comedy movie “Best Sheep”, which will follow the lives of people from Utskarpen, Norway, where it’s important to have the best sheep. She’s also shooting for the documentary drama movie “Stalk Her”, which follows the social media star Sommer Ray, and her obsessed fan.

I Think I Found Heaven 🍃🌴

Kinsey’s an Instagram star, as she’s followed by more than 3.7 million people, while she’s uploaded close to 600 pictures, most of which have been taken during her everyday life, and usually have her breasts and buttocks in focus.

Her Facebook account is followed by more than 17,500 people, and she’s also a TikTok star, having amassed over three million followers, and close to 30 million likes of all her videos combined.

Love life and relationship with VitalyzdTV

Kinsey prefers to keep the details of her love life to herself, and has only spoken about a single man whom she has been with: Vitaly Zdorovetskiy.

The two apparently met on the internet in 2018, and chatted for around a month before going out on a date. Kinsey could then have been seen featured in a number of Vitaly’s YouTube videos, and when the two attended various events together. The relationship lasted for around a year and a half, as they split in early 2020 for unknown reasons.

There are some who believe Kinsey to be bisexual, claiming to have seen her kissing her female friend at a club in Los Angeles, California; no evidence has been provided to support these claims, nor has Kinsey commented on this.

As of July 2021, she seems to be single, hasn’t married, and doesn’t have children.

Kinsey enjoys extreme sports, and is perhaps known best for having run onto the soccer field in June 2019, during the Champions League’s final game between Tottenham and Liverpool. She wore a swimsuit, and was eventually caught by security, while she then spent over five hours at a police station. Kinsey became quite popular because of this, and she handed out a thousand signed posters featuring herself. When asked about this, she commented: ‘You guys I can’t even fathom what is going on right now, I feel amazing and so thankful, I really could cry. I really did this just because I really want to push myself out my comfort zone, I love that feeling – that adrenaline feeling and doing crazy things.’

She’s physically quite active, and has multiple training sessions at the gym each week. Kinsey’s also into hiking, snowboarding and surfing.

She’s a huge lover of animals, with horses being her favorites.

Kinsey’s favorite hobby is travelling, and she’s been all around the world, visiting every continent with the exception of Antarctica. Her favorite country to visit is Austria, mostly because of its mountains.

In her spare time, Kinsey likes to watch movies starring her favorite actor and actress, Leonardo DiCaprio and Natalie Portman, and a couple of her favorite films are “Titanic”, “Leon: The Professional” and “Black Swan”.

Who is her former boyfriend Vitaly Zdorovetskiy?

Vitaly ‘VitalyzdTV’ Zdorovetskiy was born in Murmansk, Russia on 8 March 1992 – his zodiac sign is Pisces, and he holds both American and Russian nationality. He’s a YouTuber and a social media star, who’s known best for his YouTube channel “VitalyzdTV”, which he launched on 7 August 2011. It’s today subscribed to by more than 10 million people, and numbers over 1.6 billion views of all his videos combined. Vitaly uploads diverse content, including pulling pranks, doing challenges, and showing his everyday life – his most popular video, “How To Get Girls To Kiss You”, has been watched over 74 million times since 3 May 2013.

It seems that he hasn’t uploaded any videos since 20 March 2020, when he announced that he had broken up with Kinsey.

Vitaly was raised as an only child in Russia, Ukraine and the US by his parents, about whom nothing’s known, as he respects their privacy. He grew up being interested in skateboarding, and Vitaly tried to become a professional, but had to give up on the dream because of multiple injuries. He was 15 years old when he began working as a garbage collector, making around $5 per hour, while he then worked as a sign spinner at Uncle Sam, earning $20 per every three hours. Upon matriculating from a local high school in 2010, he starred in an adult movie.

He hasn’t spoken of any other women whom he has been with, besides Kinsey.