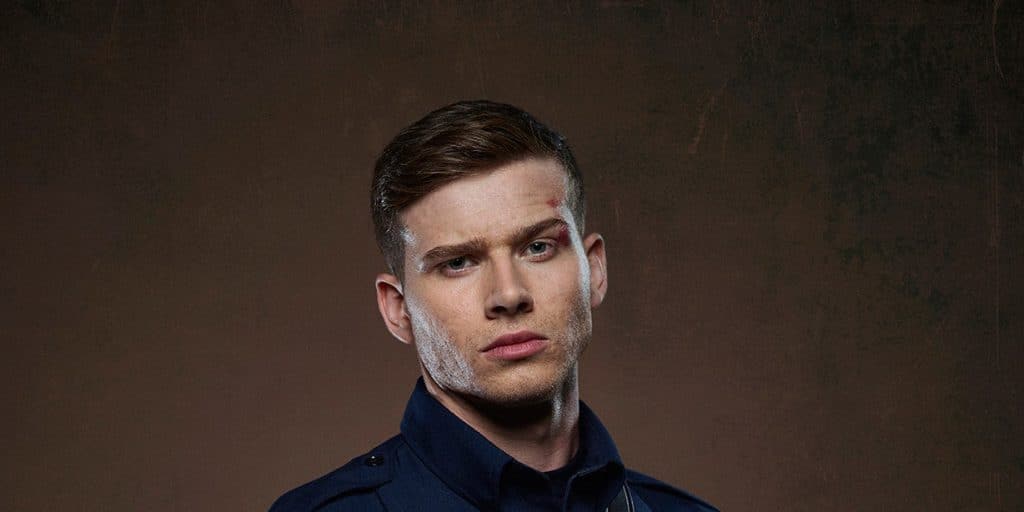 What happened to Oliver Stark’s eye? Wife, Height, Net Worth

Who is Oliver Stark?

He was born as Oliver Leon Jones in London, England on 27 June 1991 – his zodiac sign is Cancer and he holds British nationality. Oliver’s an actor who’s probably known best for his portrayal of the lead character Evan ‘Buck’ Buckley in the action thriller series “9-1-1”, created by Ryan Murphy, Tim Minear and Brad Falchuk, and which also stars Angela Bassett and Peter Krause. It has been airing since 2016, and follows the team which is first to respond to emergency 9-1-1 calls. The series has been nominated for 19 awards, winning eight.

What happened to his eye?

Oliver has a birthmark right above his left eye, and another above his eyebrow.

He was advised by his acting teacher to remove it, claiming that would help his acting career, however, Oliver appears to be somewhat attached to the birthmark, stating it’s a part of him and he doesn’t want to get rid of it.,

Oliver was raised alongside his older brother in London, but neither of the two have spoken of their parents as they prefer to be left out of media.

He studied at Hendon School at which he was physically active, as he played the most popular European sport – soccer – and was also interested in various other activities including dancing and acting. Oliver appeared in various school plays, and also worked several jobs to financially support himself, including being a call center operator, computer game salesman, and a door-to-door salesman.

Upon matriculating in 2009, he launched his acting career and chose not to pursue a college degree, but to focus on acting as a full-time job.

Oliver made his debut film appearance with his portrayal of the lead character Jeremy in the 2010 crime drama “Break In”, written and directed by Ryan Claffey, and which also starred Kayliegh Alwill. The film follows Jeremy who wants to become part of a criminal group, but has to break into one’s home as his initiation.

The following years saw Oliver star in several shorts such as the 2010 “Talking to the Filth”, and in 2011 “Always There”, “Spirit”, and the lead character Greg in the short drama “Something Blue”, which follows Paul who’s Charlie’s father, while Charlie’s struggling with Gender Dysphoria.

Oliver went on to star in the 2012 short comedy drama “Venus Vs Mars”, while the same year saw him play the supporting character Pack Leader in the horror “Community”, written and directed by Jason Ford, and which starred Jemma Dallender, Elliott Jordan and Paul McNelly. The movie follows two students who venture onto the Draymen Estate, which is said to be haunted by ghosts and mysterious creatures. Oliver’s following roles were in the 2012 short movies “Follow” and “12”, and the 2013 family adventure fantasy “The Adventurer: The Curse of the Midas Box”.,

In 2016, he was cast to play Gregor in the action adventure fantasy “Underworld: Blood Wars”, written by Cory Goodman and five others, directed by Anna Forester, and which starred Kate Beckinsale, Tobias Menzies and Theo James.

The movie follows Selene who’s a vampire death dealer, as she struggles to end the war between the Vampires and the Lycans. Oliver’s most recent movie role has been as the narrator in the 2020 short animated drama “End Live-Shackle Slaughter PSA”.

He made his debut TV series appearance with his portrayal of Kyle DeNane in the 2011 episode “Natural Selection” of the drama “Casualty”, and the following years saw him make a guest appearance in an episode of various series, such as the mystery crime drama “Luther”, the comedy “Big Bad World”, and the romantic horror drama “Dracula”.

Oliver played the supporting character Ryder in the action adventure drama “Into the Badlands” created by Miles Millar and Alfred Gough, and which starred Daniel Wu, Emily Beecham and Orla Brady. It follows a young boy and a mighty warrior as they travel around the lands controlled by evil barons.

The series won one of the nine awards it was nominated for.

Oliver’s only other TV series role has been his appearance in the 2021 episode “Hold the Line” of the action thriller drama “9-1-1: Lone Star”, which is a spin-off from “9-1-1”, and follows a firefighter from New York who has moved with his son to Austin in Texas. It’s been nominated for two awards winning one.

Oliver has made a guest appearance in various talk-shows, such as “Red Carpet Report”, “Celebrity Page” and “Entertainment Tonight”.

Oliver’s more or less secretive when it comes to his love life, but it’s known that he has been in a relationship since 2015.

He and Hannah Harlow haven’t disclosed how and when they met but it’s widely believed that it was at a party organized for actors and actresses in early 2015. Hannah’s both a model and an actress, who gained recognition after competing in the reality game-show “Project Runway”, and has two acting credits: she played Heather in the 2016 episode “Ghost Gun” of the mystery crime drama “NCIS: Los Angeles”, and Sovereign Chambermaid in the hit 2017 action adventure comedy movie “Guardians of the Galaxy Vol. 2”. She and Oliver have been together for more than five years, and it doesn’t appear as the two are planning to marry anytime soon, although there are rumors circulating the internet that they have already exchanged vows, however, this haven’t been confirmed.

Oliver hasn’t spoken of any other girls he has perhaps been with and as of March 2021, he’s dating Hannah Harlow, hasn’t married and doesn’t have children.

Oliver’s main hobby is working out at the gym, and he has five to six training sessions each week, thus his muscular body. He has been a vegan for five years, and urges his fans not to eat meat, claiming that they can find everything their bodies need in vegetables.

He’s a dog-lover, and has just recently rescued a dog which can now be seen featured in many of his Instagram pictures.

Summer is his favorite season as he enjoys showing off his body at the beach, swimming and playing beach soccer and volleyball.

Oliver likes to travel, and his acting career has taken him to various European countries, as well as a couple of US states including New York and California.

He has his own favorite actors and actresses, some of whom are Al Pacino, Robert De Niro and Helen Bonham Carter, while a couple of his favorite movies are “Scarface”, the trilogy “The Godfather” and “Fight Club”.