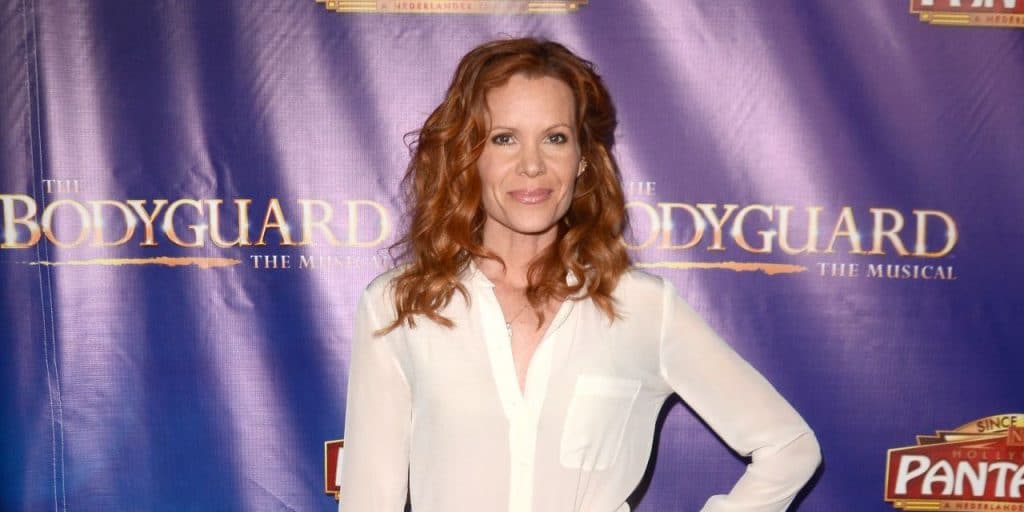 Who is Robyn Lively?

Robyn Elaine Lively was born in Powder Springs, Georgia USA, on 7 February 1972 – her zodiac sign is Aquarius and she holds American nationality. She’s an actress who’s probably still known best for her portrayal of Louise Miller, one of the lead characters in the 1989 romantic fantasy comedy movie “Teen Witch”, written by Robin Menken and Vernon Zimmerman, directed by Dorian Walker, and which also starred Dan Gauthier and Joshua John Miller. It follows high school student Louise who learns that she has magical powers, but which can’t help her find true love. The movie was nominated for two awards.

Robyn’s also known for being the half-sister of the famous American actress Blake Lively.

Robyn was raised in Powder Springs alongside her siblings Jason and Lori, and half-siblings Eric and Blake by her mother Elaine Lively who’s a talent manager, and her father Ronald Otis ‘Ronnie’ Lively who was her mother’s first husband.

As her entire family was into acting, Robyn became interested in it as well, and was six years old when she launched her career with her portrayal of Sharon Bergen in the romantic war drama “Summer of My German Soldier” which was a hit, winning two awards including a Primetime Emmy, while it was nominated for two other awards. Her following role came in 1983 when she was 11, and she played Amanda in the episode “Words and Music” of the drama series “Boone”. A couple of her following roles were in the action crime drama “Knight Rider”, the family comedy “Punky Brewster”, and the family comedy “The New Leave It to Beaver”.

In 1986, Robyn was cast to star as Alice in the sports comedy Wildcats”, which also starred Goldie Hawn and Swoosie Kurtz, and follows a female high school football coach having a hard time adjusting to her new job.

Robyn established herself as a famous actress in 1989, with her portrayal of one of the lead characters, Jessica Andrews in the family action movie “The Karate Kid Part III”, which also starred Ralph Macchio and Pat Morita, and follows Daniel and Miyagi, a martial arts student and teacher, who have to defend themselves from the villain John Kreese and his friend who owns a toxic waste disposal facility. The movie was nominated for five awards.

Robyn matriculated from a local high school in 1990, and then chose not to pursue a college degree but to focus on her acting career.

Robyn has appeared in around 100 movies and TV series, and we’re about to mention more of her most notable performances.

In 1990 and 1991, she played Lana Budding Milford in six episodes of the critically acclaimed mystery crime drama “Twin Peaks”, created by Mark Frost and David Lynch, and which starred Kyle MacLachlan, Madchen Amick and Michael Ontkean. It follows an FBI agent investigating a murder in the city of Twin Peaks, and it won 16 awards including three Golden Globes, while it was nominated for 45 other awards. The series ranks amongst the 100 best of all time. The following years saw Robyn play supporting characters in several popular series, such as the 1992 drama “Freshman Dorm”, the 1993 family comedy “Doogie Howser, M. D.”, and the 1996 mystery thriller drama “Chicago Hope”.

In 1996, she was cast to star as Lane McKenzie in the drama “Savannah”, and in the following year was cast to play another lead character, Casey Wagonman in the comedy “George & Leo”.

In 2003, Robyn played NCIS Special Agent Vivian Blackadder in the episodes “Meltdown” and “Ice Queen” of the critically acclaimed action crime drama “JAG”, created by Donald P. Bellisario and which starred David James Elliott, Patrick Labyorteaux and Catherine Bell. It follows the life of a former Navy fighter pilot who has now become a lawyer, and it won 12 awards including three Primetime Emmys, while it was nominated for 17 other awards.

The following years saw Robyn appear in an episode or two of numerous series; her next notable performance was in 2014 when she was cast to star as both Grace and Claire Gibbon in the family fantasy adventure “Gortimer Gibbon’s Life on Normal Street”, created by David Anaxagoras, and which also starred Sloane Morgan Siegel, Ashley Boettcher and Drew Justice. It follows Gortimer and his two friends Mel and Ranger as they’re growing up on Normal Street. The series won nine of the 23 awards for which it was nominated.

Three of Robyn’s most recent roles in TV series have been in eight episodes of the 2019 horror thriller drama “Light as a Feather”, the episode “Now and Then” of the crime comedy drama “The Rookie”, and two episodes of thedrama “All Rise”, both in 2020.

In 1991, Robyn played Franny Peyton in the romantic drama “Crazy from the Heart”, and she continued playing supporting characters in rather mediocre movies such as the 1992 drama “In Sickness and in Health”, the 1993 mystery crime drama “Precious Victims”, and the 1995 family film “The Adventures of Young Indiana Jones: Travels with Father”.

She gained recognition in 2006 with her portrayal of one of the lead characters Leanne, in the horror thriller “Simon Says”, written and directed by William Dear, and which also starred Crispin Glover, Margo Harshman and Greg Cipes. It follows five young adults camping in the woods, and the deranged Simon who’s making their weekend trip a nightmare.

A couple of Robyn’s following roles were in the 2009 comedy “Alligator Point”, the 2010 hit family drama “Letters to God”, and the family drama “Who Is Simon Miller?” In 2014 she played Mrs Galardi, one of the lead characters in the mystery horror thriller “Ouija”, which also starred Olivia Cooke and Ana Coto, and follows several friends who manage to awake an ancient creature with their Ouija board. The movie ‘won’ a Fangoria Chainsaw Award for Worst Film.

Three of Robyn’s most recent film roles have been in the  family comedy “Periphery”, the comedy “Miss Arizona” both in 2018, and the 2020 thriller “Through the Glass Darkly”.

Robyn voiced Fairy in the 1993 video game “Return to Zork”.

Robyn has made a guest appearance in several talk-shows, including “Access Daily”, “Home & Family”, and “Entertainment Tonight”.

Robyn has been nominated for four Young Artist Awards, and a 1991 Daytime Emmy Award for Outstanding Performer in a Children’s Special for the episode “The Less Than Perfect Daughter” of the adventure comedy series “ABC Afterschool Specials”.

Robyn’s quite secretive when it comes to her love life, but a few details are still known.

She exchanged vows with Brat Johnson on 25 September 1999, in a large ceremony attended by their wide circle of friends and family members. He’s an American actor, film writer and director, who has around 70 acting credits to his name, while he’s probably still known best for his portrayal of Coach Bolton in the 2008 family comedy movie “High School Musical 3: Senior Year”.

In 2003, Robyn gave birth to their son Baylen Johnson followed by their daughter Kate Johnson in 2005, then in April 2008 to their second son Wyatt Blake Johnson. As of April 2021, the family of five seems to be leading a happy life together.

Before meeting Brat, Robyn was in a relationship with the Canadian-American actor and film director Jason Bradford Priestley in 1991, and with the famous American actor, singer and comedian Neil Patrick Harris in 1992 and 1993.

Robyn’s favorite season is summer, as she enjoys being close to the ocean, sun tanning at the beach and showing off her slim figure. She has uploaded many pictures featuring herself at the beach onto her Instagram account.

She’s a dog lover. and her pet Golden Retriever dog can be seen featured in many of her Instagram pictures.

Before giving birth to her first child, Robyn loved to travel, and her acting career has taken her all around the US as well as to a couple of European and Asian countries. Her dream travel destination is still Miami in Florida.

She has her own favorite actors and actresses, some of whom are Johnny Depp, Leonardo DiCaprio and Julia Roberts, and her favorite movies are the franchise “Pirates of the Caribbean”, “Titanic” and “The Runaway Bride”.

Who is her half-sister Blake Lively?

Blake Ellender Lively was born in Los Angeles, California USA, on 25 August 1987 – her zodiac sign is Virgo and she holds American nationality.

She’s an actress who’s probably known best for her portrayal of the lead character Serena van der Woodsen in the romantic drama series “Gossip Girl”, which aired from 2007 to 2012, and was created by Josh Schwartz and Stephanie Savage. It follows a blogger who’s revealing secrets of rich teenagers from the Upper East Side of New York on the internet; the series won 21 of the 57 awards for which it was nominated.

She was raised in Los Angeles by her mother and her father Ernie Lively, who’s a famous American actor and acting coach. As she was growing up, Blake often kept her parents company while they were on sets of movies and TV series, and so was 10 when she launched her career with an appearance in the 1998 movie “Sandman”. She studied at Burbank High School at which she was interested in various activities, as she was the class president, a cheerleader and a member of the school’s choir.

Blake has won eight of the 31 awards, for which she has been nominated.

She’s also a celebrity homemaker and is interested in baking while some of the cupcakes she has made have been sold at the Sprinkles bakeries.

She supported Barrack Obama during both his presidential candidacies.

Blake was once in a relationship with the American actor and musician Penn Dayton Badgley, alongside whom she starred in the series “Gossip Girl”. They were together for three years before splitting ways, then in October 2011, she began dating the famous Canadian-American actor and movie producer Ryan Rodney Reynolds. They exchanged vows on 9 September 2012, and in December 2014, Blake gave birth to their daughter James. In September 2016, their second daughter Inez was born, followed by their third daughter Betty in October 2019. The family of five seems to be leading a happy life together in Pound Ridge in New York.