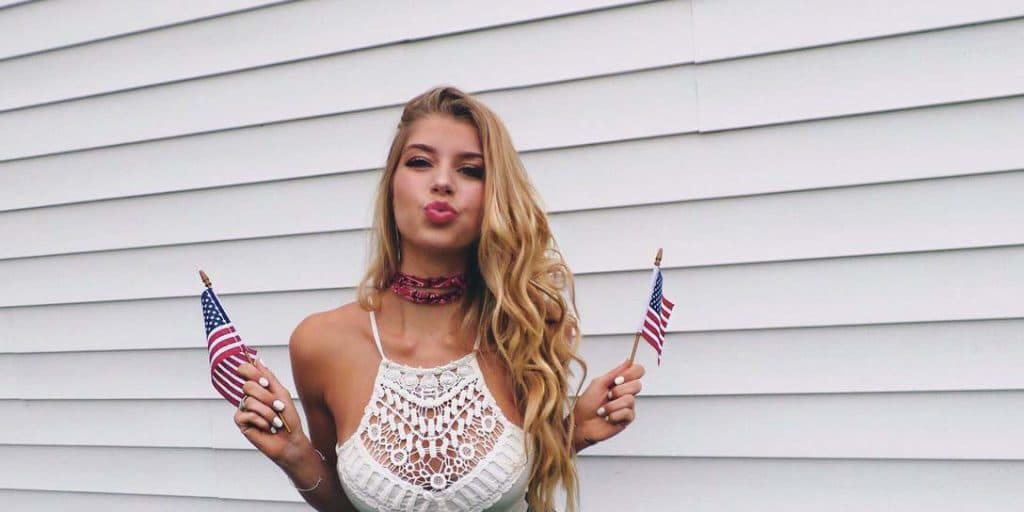 Who is Allie DeBerry? Height, Boyfriend, Net Worth, Parents, Wiki

Alexandria Danielle ‘Allie’ DeBerry was born in Houston, Texas USA, on 26 October 1994 – her zodiac sign is Scorpio, and she holds American nationality. She’s an actress, model and a social media star, who’s probably known best for her portrayal of Paisley Houndstooth, in the family comedy series “A. N. T. Farm”, which was created by Dan Signer, and aired from 2011 to 2014. It starred China Anne McClain, Sierra McCormick and Jake Short, and follows a talented singer, who enrolls into her high school’s Advanced Natural Talents program. The series was a hit, winning seven of the 19 awards for which it was nominated.

Posted by Emmaoclothing on Monday, November 16, 2015

Allie was raised in Houston alongside her two older siblings, by their father Tom, and their mother Cindy De Berry; her parents prefer to be left out of media, thus not a lot is known about them.

Allie became interested in acting at a very early age, and was six when she made her debut TV series appearance, with her portrayal of Brittany in the 2001 episode “Finding Time; Girl Lost; Firestorm” of the documentary drama “It’s a Miracle”. The same year also saw her make her debut film appearance, as she portrayed Flower Girl in the romantic musical drama “The Way She Moves”.

She continued acting throughout her entire education, while she was also into modelling and dancing. Upon matriculating in 2012, Allie chose not to pursue a college degree, but to focus on her career as an actress.

At the beginning of her acting career, Allie was only cast to play supporting characters in an episode or two of various series, such as the comedy “I’m with Her”, the family drama “What’s the Word” and the family comedy drama “True Jackson, VP”.

In 2013, she starred in the episode “The Kiss” of the romantic comedy drama “Hart of Dixie”, created by Leila Gerstein, and which starred Jaime King, Rachel Bilson and Cress Williams. It follows Zoe Hart who has been invited to work in Dr. Harley Wilkes’ medical practice in Bluebell, Alabama, however, after arriving there, she learns that he’s died, and left her in charge of his practice.

The series aired from 2011 to 2015, and won one of the five awards for which it was nominated.

After gaining recognition for her performance in the series “A. N. T. Farm”, Allie was invited to guest star in various hit series, some of which are the comedy “Suburgatory”, the action crime fantasy “From Dusk Till Dawn: The Series”, and the short action adventure “The Inspectors”. Her most recent TV series role has been her portrayal of Montgomery Laurent, in the 2021 action crime drama “DFW the Series: Traffickers”.

Allie has been focused more on appearing in films than in TV series, and has appeared in a few hit movies.

The year 2007 saw her play Sara Pedersen in the romantic comedy “Love and Mary”, with a couple of her following roles having been in the 2013 science fiction comedy “The Starving Games”, the 2014 thriller drama “Mission Air”, and the 2015 drama “Hoovey”.

Perhaps one of her most notable performances in movies has been her portrayal of Mindy in the 2015 science fiction action comedy “Lazer Team”, written by Burnie Burns, who also starred in it alongside Gavin Free and Michael Jones. The movie follows four men who have found a UFO, and upon entering it, instantly became equipped with battle suits; it was nominated for a 2016 Streamy Award for Best Feature. Allie reprised her role in the 2017 sequel “Lazer Team 2”.

The year 2016 saw her play supporting characters in three movies, including in the romantic fantasy comedy “Slash”, which was nominated for three awards. In 2019, she was cast to star alongside Nicky Whelan and Anna Hutchison in the thriller “Secrets at the Lake”, directed by Tim Cru, and which follows a group of teenagers who have made a pact, which will have many consequences.

Allie’s most recent movie appearance has been in 2021, when she played the supporting character Sarah Smith, in the action adventure comedy “Send It!” It was written by Charles McKinney, directed by Andrew Stevens, and starred Kevin Quinn, Claudia Lee and Patrick Fabian. The film follows an extreme sportsman who has entered the Kiteboarding Championship.

She has been featured in a couple of documentary series, including “On the Spot Interviews” in 2012, and “Teens Wanna Know” in 2015.

Allie has made a guest appearance in several talk-shows, such as “What’s the Word?”, “Piper’s QUICK Picks”, and “Hello! Hollywood”.

She won four Christian Film Festival-Menchville Baptist Church Awards in 2016, for her performance in the family movie “Pass the Light”; these were for Best Villainess, Best Actress Fan Favorite, Best Actress, and Best Cast (shared with colleagues).

Allie’s quite open when it comes to her love life, and it’s widely known that she’s today a married woman. She met the professional baseball player Tyler Beede in late 2016 or early 2017, at a baseball game.

It was Allie’s mother who recommended that the two meet, and they had chatted on the internet for over a month, before deciding to meet in person. Their first kiss was on Kiss Cam – on 26 November 2017, Allie and Tyler exchanged vows in a large ceremony attended by their wide circle of friends and family members. They have been together to this day, and it doesn’t appear as the two are planning to have children anytime soon, as they’re both focused on their careers.

As of June 2021, Allie’s married to Tyler Beede and doesn’t have children.

Allie’s quite active on Instagram, and enjoys the attention she’s receiving from her 250,000 followers.

She has uploaded over 600 pictures, most of which have been taken during her everyday life.

She loves to travel, and her acting career has taken her to various US states, while the popular actress has also been to a couple of European countries, including England and Italy. She likes to go backpacking and camping, and would like to become the owner of a Volkswagen bus, her favorite vehicle to travel by.

Allie likes summer, because she gets to show off her body at the beach, swim in the ocean and sun tan.

She has her own favorite actors and actresses, some of whom are the late Heath Ledger, also Robert De Niro and Angelina Jolie, and a couple of her favorite movies include “Brokeback Mountain”, “Scent of a Woman” and “Mr. and Mrs Smith”.

Who is her husband Tyler Beede?

Tyler Beede was born in Worcester, Massachusetts USA, on 23 May 1993 – his zodiac sign is Gemini, and he holds American nationality. He’s known best for playing with the San Francisco Giants in Major League Baseball (MLB), but also for being Allie’s husband.

He studied at Lawrence Academy at Groton, and upon matriculating in 2011, Tyler was drafted as the 21st overall pick by the Toronto Blue Jays. However, he still decided to focus on his education, thus refusing the offer, and enrolled at Vanderbilt University on a baseball scholarship.

In 2012, he was named to the All-Southeastern Conference team, and in 2013 was selected to play for the US collegiate national team.

Upon graduating in 2014, he was drafted by the San Francisco Giants as 14th overall, and received $2.6 million as a signing bonus, however, he didn’t play for them until proving himself in rookie games, first for the Arizona Giants, and then progressed to the Salem-Keizer Volcanoes, before switching once again to play for the San Joes Giants, competing in the Class A-Advanced California League. He also played for the Richmond Flying Squirrels and the Sacramento River Cats, before finally making his debut in the major league with the Giants, on 10 April 2018. His net worth is already estimated at close to $2 million.

Tyler’s also active on Instagram, and is followed by over 27,000 people.