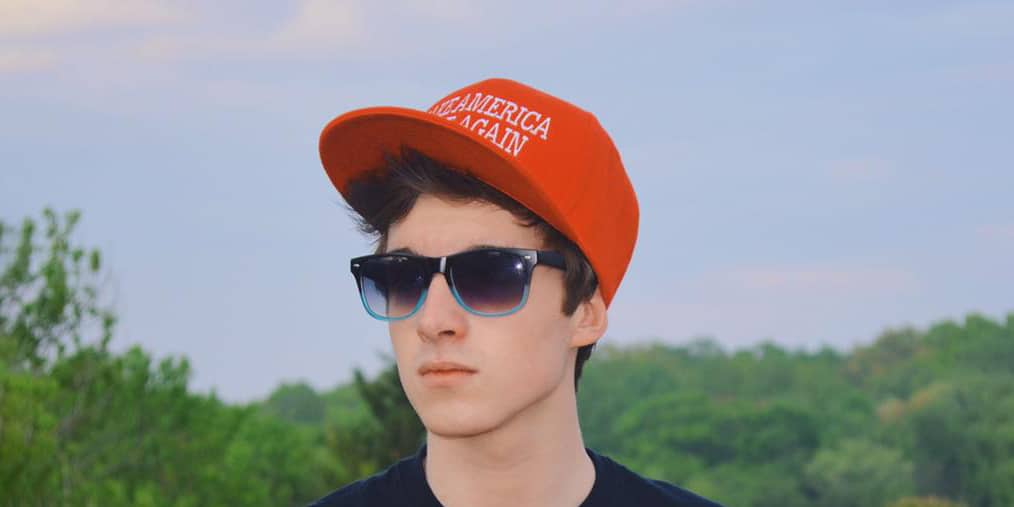 Who is Hunter Avallone? Age, Height, Girlfriend, Net Worth, Wiki

Who is Hunter Avallone?

Hunter Vincent Avallone was born on 11 November 1996 under the zodiac sign of Scorpio, in Walkersville, Maryland USA. He is a 24-year-old social media sensation and YouTuber, who gained fame for posting political videos to his official YouTube channel, on which he has amassed almost 600,000 subscribers, while his videos have been viewed more than 105 million times in total. He also runs his official TikTok, Instagram, and Twitter accounts.

How rich is he, as of now? Hunter Avallone’s Net Worth

As of mid-2021, Hunter Avallone’s net worth is estimated at well over $100,000, acquired largely through his Internet-based career, which includes sponsored posts, various advertisements, brand deals, and video monetization. Besides, he increases his fortune through the sales of a merchandise line.

Hunter Avallone spent his early years in his hometown of Walkersville, where he was raised in a conservative family.

Little is known about his parents except that his father’s name is Vinny Avallone. He has five younger siblings, one of them is a brother named Christian. He holds American nationality, and belongs to White Caucasian ethnic group. Regarding his education, Hunter went to a kindergarten at a Christian private school, but was later home-schooled.

Hunter Avallone became active on the social media scene at a very young age when he started filming funny videos with his brother for YouTube.

They launched a channel under the username ‘Comic Shower’ on 4 November 2011, while they posted their debut video, entitled “After Hours”, in September of the following year. They continued to make videos of comedy content, and uploaded them every other week over the next three years, which helped them to increase the number of their followers and totalviews. Some of their most popular videos included “Home-schooler Pick Up Lines”, “6 Worst #Selfies”, and “Evidence There is NO God”, to name a few. Their last video on the channel was uploaded in July 2014. The brothers also ran their own Facebook page, and Instagram account which was shut down.

Thereafter, Hunter Avallone started a solo career on YouTube, launching his official self-titled channel on 23 March 2014, and started filming videos and posting. He uploaded his first video, entitled “Most Stupid Pictures Online”, in October 2014. He initially created apolitical content until he came up with an idea to change that in the following year, when he uploaded his first political video “How To Be a Liberal”. It brought him many views and followers, which encouraged him to continue to producing similar content.

Hunter then started filming commentaries, rants and distracts, which quickly became very popular and enlarged his fan base; the way he began doing commentaries on various political and other serious matters distinguished him from other famous YouTubers. His videos argued for conservative views and mocked liberals. He even made such series as “Liberals vs. Logic”, “Liberals Ruin”, and “Buzzfeed Bashing”. Hunter also gained fame for posting videos in which he mocks feminists, and debated with other YouTubers, including Vaush.

In late 2019, Hunter decided to leave conservatism, and started identifying himself as a centrist, at the time mocking both left- and right-wingers. He explained it in the video “Why I Left the Right”, posted in April 2020.

Some of his most popular YouTube videos include “Trolling the WΟΜΕΝ’S ΜΑRCΗ!”, “Angry Racist Won’t Talk to White People”, and “when feminists do stand up “comedy””, among others.

Additionally, Hunter expanded his influence across other social media platforms to promote himself, his projects, and his videos. He runs his official Twitter account under the username ‘@HunterAA6’, and is also active on Instagram, on which you can find him under the nickname ‘hunteravallone’.

I had a lot of fun researching, writing, and suffering to deliver this review of Candace Owens new late night show. Check it out and leave a like! https://t.co/pRlCf6b4WE

He also has an account on the TikTok platform, where he goes by the username ‘avallonehunter’,and he recently created an account on the streaming website Twitch. Hunter also launched a line of merchandise called ‘Avallone Apparel’, which includes hoodies, sweatshirts, t-shirts, phone cases and caps.

Following his interview with Tim Pool and appearance in his podcast on 14 December 2020, viewers didn’t like the way Hunter Avallone presented himself. They were also dissatisfied with his comments on the Hunter Biden-Ukraine scandal, after which he lost thousands of subscribers to his YouTube channel.

He even disabled his Instagram account. Tim reportedly said that Hunter was the dumbest guest he’d ever had.

Hunter Avallone has short dark brown hair and blue eyes. He stands at a height of 5ft 9ins (1.75m), while his weight is around 154lbs (70kgs). Information about his vital statistics, biceps size, and shoe size isn’t available.

Hunter Avallone has been romantically involved with a girl named Carissa Keely for a while. Although he identified himself as a conservative, they had sex out of wedlock and she became pregnant. Their love story didn’t continue in a good way since he ran away after finding out that he was going to become a father, and even cheated on her with another girl.

Nonetheless, he eventually accepted responsibility and they renewed their relationship. She gave birth to their first child, a daughter named Rose Reagan Avallone on 2 March 2019. By the end of the year, she became pregnant with their second child and so they married – Hunter and Carissa exchanged wedding vows at a ceremony held on 2 January 2020, and welcomed a son, named Hunter William Avallone, on 17 March 2020.

Hunter Avallone once revealed that he has struggled with obsessive-compulsive disorder (OCD). He supported the LGBT community although he was initially a Christian, but later became an atheist.

Hunter is an avid animal lover and has a pet dog named Shasta.