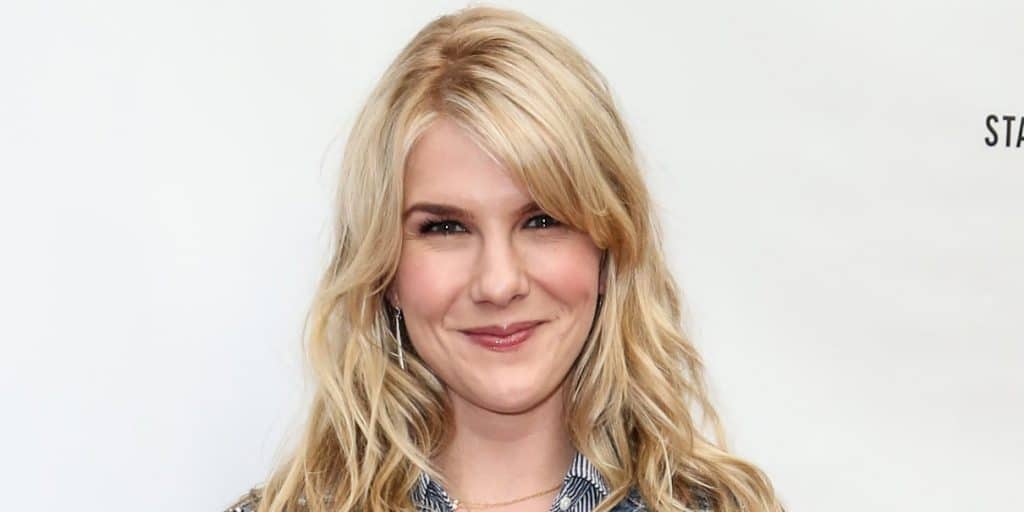 Who is Lily Rabe from American Horror Story? Body, Pregnant

Lily Rabe was born in New York City, USA on 29 June 1982 – her zodiac sign is Cancer, and she holds American nationality. She’s an actress and a film producer, with close to 50 acting credits to her name, while she’s perhaps known best for her portrayal of Miss Stevens, the main character in the eponymous 2016 comedy drama film. It was written and directed by Julia Hart, also starred Timothee Chalamet and Lili Reinhart, and follows a teacher as she’s preparing a group of teenagers for a state drama competition; the film won one of the three awards for which it was nominated.

Lily was raised in New York City alongside her brother Michael and half-brother Jason, by their father David Rabe, an American screenwriter and playwright, and her mother Jill Clayburgh, the late American actress. Lily’s brother Michael is also an actor, while Jason’s a musician.

When Lily was around eight years old, the family moved to Bedford, New York State, and when she was 13 they moved to Lakeville, Connecticut, where she attended Hotchkiss School and became interested in dancing, going on to practice it for the following 10 years. It was while at a summer arts program, at which Lily taught ballet, that she was noticed by a talent scout, who invited her to attend her first audition; Lily then made her debut film appearance, with her portrayal of Tess in the 2001 romantic comedy movie “Never Again”.

Upon matriculating, Lily enrolled at Northwestern University, from which she graduated with a Bachelor’s of Arts degree in acting in 2004.

In 2003, Lily portrayed Art History Student in the critically acclaimed drama “Mona Lisa Smile”, directed by Mike Newell, and which starred Julia Roberts, Kirsten Dunst and Julia Stiles. It follows an art professor in the ‘50s, who’s teaching girls to question the traditions they’ve been taught – the film was nominated for six awards.

A couple of Lily’s following roles were in the 2006 thriller “A Crime”, the 2007 romantic comedy drama “No Reservations”, and the 2008 comedy drama “What Just Happened”. Also in 2008, she voiced Mona Peek, in the animated drama “The Toe Tactic”, and the following year saw her star as Mary Byrne in the drama “Last of the Ninth”.

In 2010, Lily played Deborah Lehrman, in the mystery crime drama “All Good Things”, directed by Andrew Jarecki, and which starred Ryan Gosling, Frank Langella and Kirsten Dunst. It follows the story of Mr. David Marks, whose wife mysteriously disappeared in 1982, while it was widely believed that he had killed her; it was nominated for a single award.

Lily’s also known for her portrayal of Joan Fischer, in the 2014 biographical sports drama “Pawn Sacrifice”, directed by Edward Zwick, and which starred Tobey Maguire, Liev Schreiber and Peter Sarsgaard. It follows the American chess master Bobby Fischer, as he’s challenging the Soviet Empire; the movie won one of the two awards for which it was nominated.

Three of Lily’s most recent film roles have been in 2019, in the mystery thriller “Fractured”, the crime thriller “Finding Steven McQueen”, and the action adventure drama “SGT. Will Gardner”.

Lily made her debut TV series appearance in 2005, with her portrayal of Siena Boatman in the episode “Scared Crazy” of the mystery crime drama “Law & Order: Criminal Intent”; the following years saw her appear in an episode of various series, including the drama “Nip/Tuck”, the crime fantasy drama “Medium”, and the fantasy drama “Saving Grace”.

She gained recognition in 2015, with her portrayal of the lead character, Claire Bennigan, in the mystery horror drama “The Whispers”, created by Soo High, and which also starred Barry Sloane and Milo Ventimiglia.

It follows a mysterious force which is capable of controlling children, and the series was nominated for five awards, including a Primetime Emmy. In 2017, she voiced Ailen, in the episode “Meet the Seer” of the animated action adventure “Regular Show”, and in 2018, Lily voiced Honerva, in the critically acclaimed animated action adventure “Voltron: Legendary Defender”.

Three of her most recent roles in TV series have been in 2021, in the historical war drama “The Underground Railroad”, the horror thriller drama “American Horror Story”, and the biographical historical drama “The First Lady”.

Lily received special thanks for the 2017 short movie “Rufus”.

She made her producing debut with the 2019 comedy “Sister Aimee”, and she’s currently working on the upcoming romantic comedy drama “We’re Just Married”, and the drama “Downtown Owl”.

Lily has made a guest appearance in many talk-shows, such as “A Little Late with Lilly Singh”, “Collider Ladies Night” and “Today”.

Lily has won only a single award: a 2016 SXSW Film Festival Special Jury Award for Best Actress – Narrative Feature, for her performance in “Miss Stevens”.

She has also been nominated for two Online Film & Television Association Awards, a Gold Derby TV Award, and a Critics Choice Television Award.

Lily’s highly secretive when it comes to her love life, however, she has still allowed her fans to have a glimpse at it.

Since May 2014, she has been in a relationship with Hamish Linklater, an American actor with 48 credits to his name, perhaps known best for his portrayal of Porter Collins in the 2015 biographical comedy movie “The Big Short”. In March 2017, Lily gave birth to their daughter, and in June 2020 to their second child.

There are rumors circulating the internet claiming that Lily and Hamish have recently exchanged vows, however, no evidence has been provided to support these claims, nor have the two commented on this.

As of August 2021, Lily hasn’t married, is in a long-term relationship with Hamish Linklater, and has two children with him.

Lily’s a fan of fast cars, and her favorite brand is Mercedes; she has uploaded several pictures of her car onto her Instagram account. Lily seems to enjoy being active on Instagram, as she likes the attention she’s receiving from her 700,000 followers.

She’s a lover of animals, with horses being her favorites. Lily learned to ride sometime in the 2000s, when it was required for her role in a movie.

She loves to travel, and her acting career has taken her all around the US, while she’s also been to various European countries, including Italy and Croatia. Lily’s dream travel destination is Paris in France.

She has her own favorite actors and actresses, some of whom are Robert de Niro, Leonardo DiCaprio and Natalie Portman, and a couple of her favorite movies include the trilogy “The Godfather”, “Titanic” and “Leon: The Professional”.