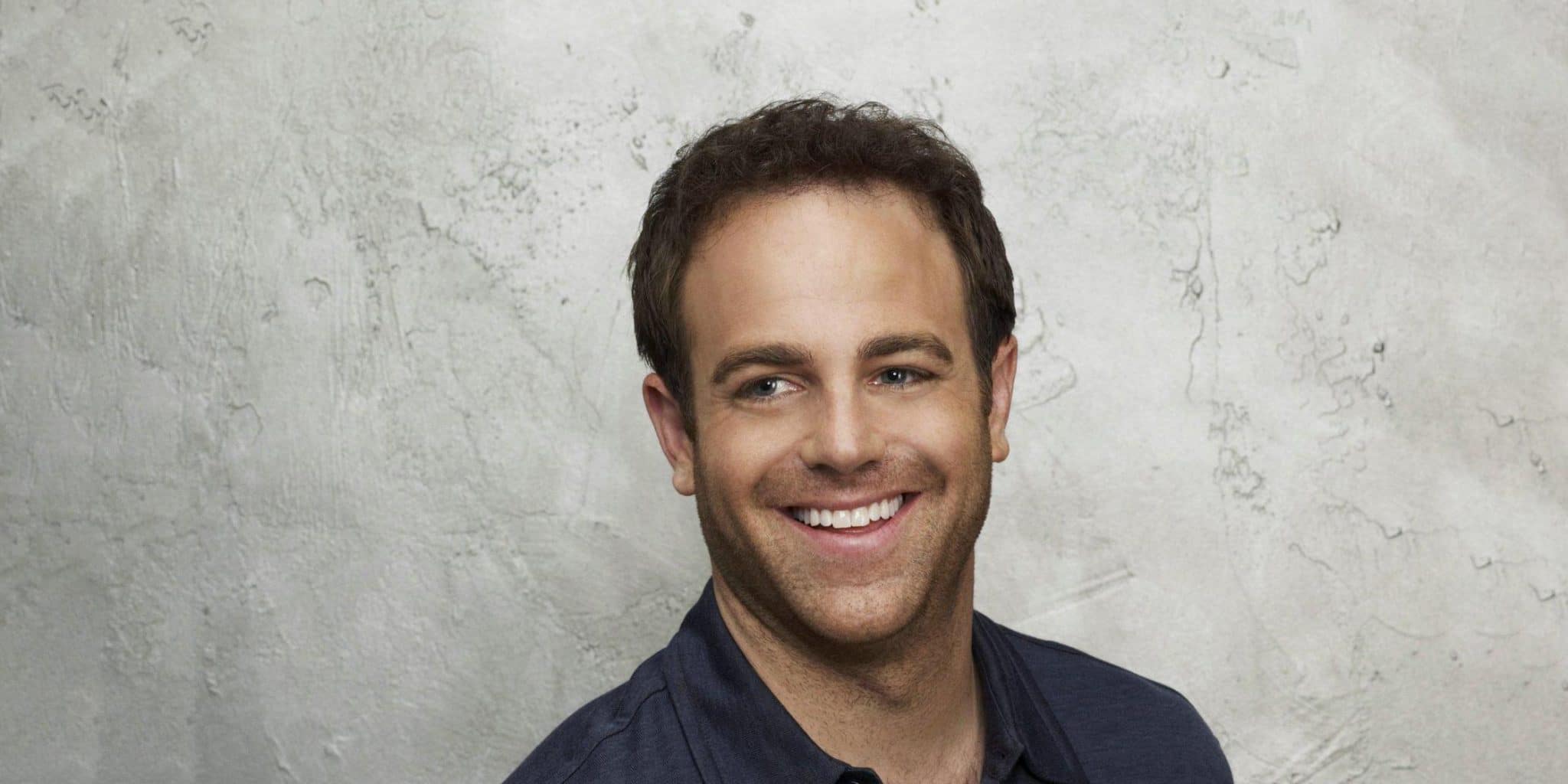 Who is Paul Adelstein?

Paul Adelstein was born in Chicago, Illinois USA, on 29 April 1969 – his zodiac sign is Taurus and he holds American nationality. He is an actor and a musician, who is perhaps still known best for his portrayal of Agent Paul Kellerman in the action crime series “Prison Break”, created by Paul T. Scheuring, and which starred Dominic Purcell, Wentworth Miller and Amaury Nolasco. It aired from 2005 to 2017 and follows the story of a man who gets sent to jail deliberately to save his brother who was sentenced to death row although he is innocent. The series won eight and was nominated for 32 other awards, including two Golden Globes.

Paul was raised in Chicago in a Jewish family, but hasn’t spoken about his parents as he prefers to keep his personal matters to himself. He hasn’t mentioned having any siblings, so most people believe him to be an only child.

Paul launched his acting career in 1990 while still attending college, when he portrayed the sailor Young Paul in the critically acclaimed crime thriller “The Grifters”, which starred Anjelica Huston, John Cusack and Annette Bening, and follows a conman who has just lost the loyalty of both his mother and girlfriend who are high-stakes grifters. The movie won 10 and was nominated for 21 other awards, including four Oscars.

The following years saw Paul appear in several successful movies, such as the 1997 romantic comedy “My Best Friend’s Wedding”, the 2000 fantasy comedy “Bedazzled”, and the 2003 romantic comedy drama “Intolerable Cruelty”. He went on to portray a federal agent in the hit 2004 crime thriller drama “Collateral” which starred Tom Cruise and Jamie Foxx, and follows a taxi driver who is being held hostage by a contract killer. The movie won 23 awards and was nominated for 72 others including two Oscars.

Paul next appeared in another evergreen movie: the 2005 romantic drama “Memoirs of a Geisha”, which starred Ziyi Zhang and Ken Watanabe, and follows the life journey of Nitta Sayuri from being nothing to becoming the most famous geisha in Japan. The movie won 32 awards including three Oscars.

A couple of his following roles were in the 2009 drama “The Missing Person”, the 2013 comedy Mother’s Day”, and the 2014 drama “Return to Zero”, while his next notable performance was in the Noah Buschel’s 2016 sports drama “The Phenom” which starred Johnny Simmons, Ethan Hawke and Paul Giamatti, and follows the life of an amateur baseball pitcher undergoing psychotherapy.

Paul has mostly been focused on appearing in TV series in recent years, and his most recent role in a movie has been in the 2017 romantic comedy “Confessions of a Teenage Jesus Jerk”. He has most recently been cast to appear in the upcoming mystery drama “The President Is Missing”.

Paul made his debut TV series appearance in the 1994 episode “If You Could Pick Your Own Parents” of the crime drama “Missing Persons”, and gained recognition in the following years when he played supporting characters in the 1999 crime drama “Turks”, the 1999 romantic fantasy comedy “Cupid”, and the 2002 drama “Breaking News”.

The year 2003 saw him appear in the crime drama “Hack”, but Paul only became popular after he was cast to portray one of the lead characters Dr. Cooper Freedman in the romantic comedy “Private Practice” in 2007, created by Shonda Rhimes, and which also starred Kate Walsh and KaDee Strickland. The series follows the life of Addison Montgomery, who works as a neonatal surgeon. It aired until 2013 and won 11 awards out of the 32 it was nominated for.

The year 2016 saw him play the supporting character Raymond Blackstone in the mystery thriller drama “Chance”, while he was then invited to play Leo Bergen in the hit thriller drama “Scandal”, which aired from 2012 to 2018, winning 35 awards while it was nominated for 69 others, including a Golden Globe.

From 2014 to 2018, Paul portrayed Jake, one of the lead characters in the comedy drama “Girlfriends’ Guide to Divorce”, which also starred Lisa Edelstein and Beau Garrett, and follows a famous author as she divorces her husband in her 40s, and now has to learn to live as a single woman in Los Angeles, California.

Paul performed the song “All You Need” in the movies “Burn After Reading” and “The Missing Person” in 2008 and 2009, respectively, and he also sang “Forget The Fall” in the 2014 film “Return to Zero”.

He received special thanks for the 2007 film “Neal Cassady”, and the 2008 movie “ABC Wednesday Night Starter Kit”.

Paul has also appeared in several documentaries, including the 2004 short film “A Look Inside ‘Intolerable Cruelty’”, the 2004 film “Bandwagon”, and the 2012 series “TeamStrick Advocacy Videos”. He has also made guest appearances in various talk-shows, such as “The Red Booth”, “Today” and “Entertainment Tonight Canada”.

Marriage with Liza Weil and their daughter

Paul met Liza Weil sometime in the 2000s when they appeared together in various theatre plays.

In November 2006, the two married in a big Reform Jewish ceremony attended by many of their friends and family members. Paul and Liza continued to collaborate, and appeared alongside in the 2007 short movie “Order Up”, the 2008 indie movie “Little Fish, Strange Pond” and the 2009 mystery comedy film “The Missing Person”.

In mid-2009, Paul and Liza announced that she was pregnant and their baby girl was born on 20 April 2010. While most people believed that Paul and Liza were leading a happy life together, Paul filed for divorce in March 2016 and it was finalized in November 2017.

Paul hasn’t talked about any other women he has perhaps been with, and as of February 2021, he is single, was married to Liza Weil and has one daughter.

Paul is a huge fan of theatre, and was a member of the company New Crime Productions before joining the Steppenwolf Theatre Company.

He has been interested in music since his early teenage years, and is today the frontman of the band Doris. It was founded in the late ‘90s, and has released a couple of albums with many of the songs written by Paul’s ex-wife Liza. In the 2012 May issue of the “Making Music Magazine”, Paul and his musical background were featured as the cover story.

He loves to travel, and has been to various US states and European countries, but his favorite city is Los Angeles, to where he moved aged 34, stating in an interview how he had fallen in love with the city.

He has his own favorite actors and actresses some of whom are Russell Crowe, Matt Damon and Emma Watson, and a couple of his favorite movies are “The Gladiator”, “Good Will Hunting” and the franchise “Harry Potter”.

When your oldest friend (not from Cleveland, not on IG) sends you something you wear it PROUDLY.#GoBrowns #GoCook pic.twitter.com/zVUIVjJWYX

Who is Liza Weil?

Liza Rebecca Weil was born in Passaic, New Jersey USA, on 5 June 1977 – her zodiac sign is Gemini and she holds American nationality. She is an actress and a musician, probably still known best for her portrayal of Paris Geller, one of the lead characters in the comedy series “Gilmore Girls”, which also starred Lauren Graham and Alexis Bledel, and follows the lives of a single mother and her teenage daughter.

She spent the first seven years of her life travelling around Europe with her parents Marc and Lisa’s comedy troupe The Madhouse Company of London. The family then settled in Lansdale in Pennsylvania; Liza started acting very early, and often travelled to New York City to attend auditions. She studied at North Penn High School, and upon matriculating in 1995, chose not to enroll at college but to pursue a career as an actress.

She went on to appear in numerous plays, then made her debut TV series appearance in an episode of the 1995 romantic drama series “As the World Turns”.

Liza only gained recognition after her role in “Gilmore Girls”, and was then invited to appear in various movies, such as the 2007 biographical drama “Neal Cassady”, the 2009 drama “The Missing Person” and the 2010 short drama “Metronome”. The year 2012 saw her play the supporting character Amanda Tanner in the thriller drama series “Scandal”, and from 2014 to 2020, she starred as Bonnie Winterbottom in the hit mystery crime drama “How to Get Away with Murder”. Liza is currently shooting for the movies “Women Is Losers” and “Mosquito”, both set to be released late in 2021.

She has won only one award: a 2011 Indie Series Award for Outstanding Guest Appearance for her performance in the comedy series “Anyone But Me”.

As soon as she and Paul separated in 2016, Liza began dating Charlie Weber, an actor and a former model. They were together until February 2019 when they split for unknown reasons.