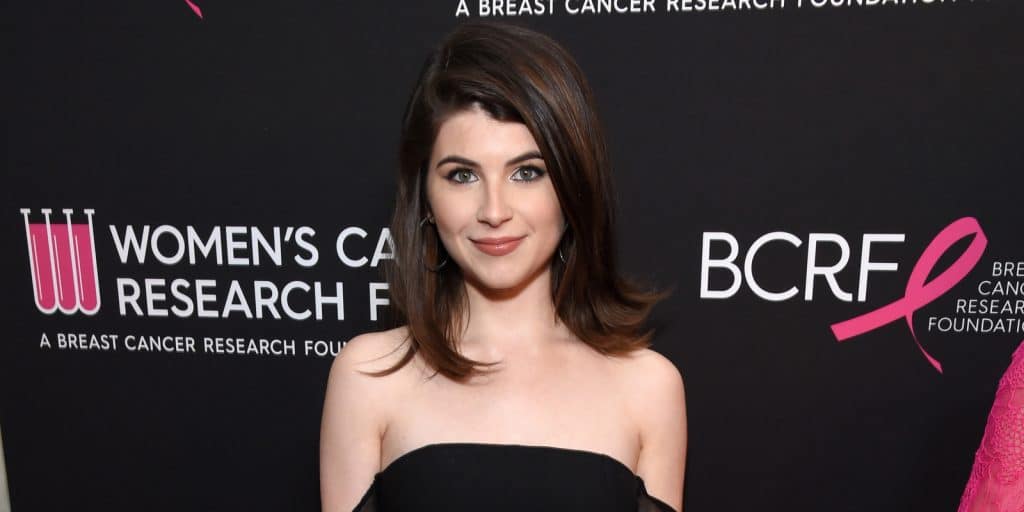 Who is Isabella Rose Giannulli?

Isabella Rose Giannulli was born on 16 September 1998 under the zodiac sign of Virgo, in Los Angeles, California USA. She is a 22-year-old actress, probably best recognized for landing the role of Ava Allen in the Hallmark Channel romantic film “Homegrown Christmas”. She is also known as the daughter of famous actress Lori Loughlin and fashion designer Mossimo Giannulli.

How rich is she, as of now? Isabella Rose Giannulli Net Worth

As of early 2021, Isabella Rose Giannulli’s net worth is estimated at over $500,000, acquired through her successful involvement in the entertainment industry since she started her professional career in 2016.

Isabella spent her early years in her hometown of Los Angeles, where she was raised in a famous family by her parents, with her younger sister named Olivia Jade Giannulli, who is known as a YouTuber and social media personality. She also has a younger step-brother, named Gianni Giannulli, from her father’s previous relationship. Isabella holds American nationality, is a Christian and belongs to White Caucasian ethnic group, and is of British and German descent. Regarding her education, Isabella went to Marymount All Girls Catholic High School in Los Angeles. Upon matriculation, she enrolled into the University of Southern California (USC), but eventually dropped out.

According to her IMDB account, Isabella Rose Giannulli made her debut appearance with the role of Mia Walker in the 2016 Hallmark Channel romantic comedy film “Every Christmas Has A Story”, next to her mother Lori Loughlin and Colin Ferguson. Her next role came two years later, when she guest-starred as Travie in the episode “Pop-Up” of the Freeform comedy series “Alone Together”, followed by her portrayal of Ava Allen in the Hallmark Channel romantic film “Homegrown Christmas” in the same year.

Isabella Rose Giannulli is very secretive when it comes to speak about her personal life. She was rumored to date a guy named Jack Harris, as well as a boy named Andrew Beyer. Moreover, she was rumored to be romantically involved with Nick Penske before her family hit the scandal in 2019; anyway, their romance has never been confirmed. Isabella’s current relationship status remains a mystery. She lives with her sister Olivia in Los Angeles.

On 12 March 2019, Isabella Rose’s entire family was involved in the center of the college bribery scandal – her parents were among 30 wealthy parents charged by the FBI and US Attorney’s office with paying $500,000 in bribes, disguised as a donation to the Key Worldwide Foundation, to enroll their daughters in the University of Southern California, as recruited athletes who would join the college’s women’s rowing team, even though none ever trained in rowing.

The following day, her parents surrendered to federal authorities and eventually pleaded guilty – her mother Lori was sentenced to two months in jail, a $150,000 fine, and 150 hours of community service, while her father Mossimo was sentenced to five months in prison, a $250,000 fine, and 250 hours of community service. In December 2020, Lori was released from prison; Isabelle and her sister Olivia remained enrolled in the college, but they never returned there.

Who is her mother? Lori Loughlin Short Wiki/Bio

Lori Anne Loughlin was born on 28 July 1964 under the zodiac sign of Leo I,n Queens, New York City USA. At the age of one, her family moved to Hauppauge on Long Island.

She was raised with her younger brother named Roy, by her father, Joseph Roy Loughlin who was a foreman for the New York Telephone Company, and her mother, Lorellee Loughlin. Lori went to Oaks School No. 3 Elementary School in Oceanside, New York, then matriculated from Hauppauge High School.

Lori Loughlin developed her love for acting very early. At the age of 11, she started her career as a print model, then her acting took off when she was chosen to play Jody Travis in the ABC soap opera “The Edge Of Night” from 1980 to 1984. She made her film debut as Susan Baxter in the 1983 supernatural horror film “Amityville 3-D”, directed by Richard Fleischer, and later that year starred as Linda Craig in the made-for-TV comedy film “The Tom Swift And Linda Craig Mystery Hour”.

It was followed by her portrayals of Abby in the thriller film “The New Kids”, Toni Williams in the teen romantic comedy film “Secret Admirer”, and Candy Cassidy in the CBS drama film “North Beach And Rawhide”, all in 1985. She then played Christian in the sports film “Rad” and Christie in the ABC action film “The Brotherhood Of Justice”, next to Keanu Reeves, both in 1986. In the next year, she had parts as Jenny Gavin in the CBS drama film “A Place To Call Home” and Sandi in the comedy film “Back To The Beach”.

In 1988, Lori Loughlin played Tara Mitchell in the comedy film “The Night Before”, and then joined the main cast of the ABC sitcom “Full House”, created by Jeff Franklin, starring in the role of Rebecca Donaldson Katsopolis in more than 150 episodes through 1995. She would later reprise the role in its sequel, entitled “Fuller House” (2016-2018), released on Netflix.

Thereafter, Lori featured as Toni Stroud in the 1994 ABC drama film “One On Her Own”, and Gerri Jensen in the 1995 drama film “Abandoned And Deceived”. Later that year, she was chosen to play Melanie Clifford in the ABC sitcom “Hudson Street” (1995-1996), alongside Tony Danza. In 1997, she landed such roles as Jill Erickson in the NBC crime drama film “In The Line Of Duty: Blaze of Glory”, next to Bruce Campbell, Jess Koster in the ABC drama thriller film “Tell Me No Secrets”, and Dr. Linda McCoy in the ABC sci-fi action thriller film “Medusa’s Child”.

During the same year, she also played Sheila Fistergraff in the direct-to-video fantasy family comedy film “Casper: A Spirited Beginning”, followed by her portrayal of Donna Deluca in the 1999 comedy film “Suckers”.

In 2001, Lori starred in the role of Janine in the action-thriller film “Critical Mass”, directed by Fred Olen Ray, after which she portrayed Sukie Ridgemont in the made-for-TV mystery drama film “Eastwick” in 2002. Her next major role came when she featured as Ava Gregory in The Web drama series “Summerland” (2004-2005), which she also created and produced. Following the end of the series, Lori did the voice-over of Melvin-Smacking Penguin in the 2006 direct-to-video parody nature documentary film “Farce Of The Penguins”, written and directed by Bob Saget.

Happy birthday, Lori Loughlin! From frontierswoman to super sleuth, we love you!

In 2007, she had a part as Dr. Joanna Lupone in the ABC sitcom “In Case Of Emergency”, alongside David Arquette, and played Gelsey Alexander in the comedy-drama film “Moondance Alexander”. Afterwards, she joined the main cast of The CW’s teen drama series “90210”, starring in the role of Debbie Wilson from 2008 to 2012. She then featured as Amanda in the 2009 comedy film “Old Dogs”, next to John Travolta and Robin Williams, and portrayed Dana Marshall in the 2010 Hallmark Channel romantic drama film “Meet My Mom”.

Lori’s next role came in 2012 when she played Susan Gates in the horror film “Crawlspace”, followed by her portrayals of Rebecca Mayer in the made-for-TV drama mystery thriller film “A Mother’s Rage”, and Abigail Stanton in the made-for-TV romantic comedy-drama film “When Calls The Heart”, both in 2013.

Later that year, Lori joined the cast of the Hallmark Movies & Mysteries film series “Garage Sale Mystery”, starring in the role of Jennifer Shannon until she was fired in 2019. She also served as an executive producer for the film series.