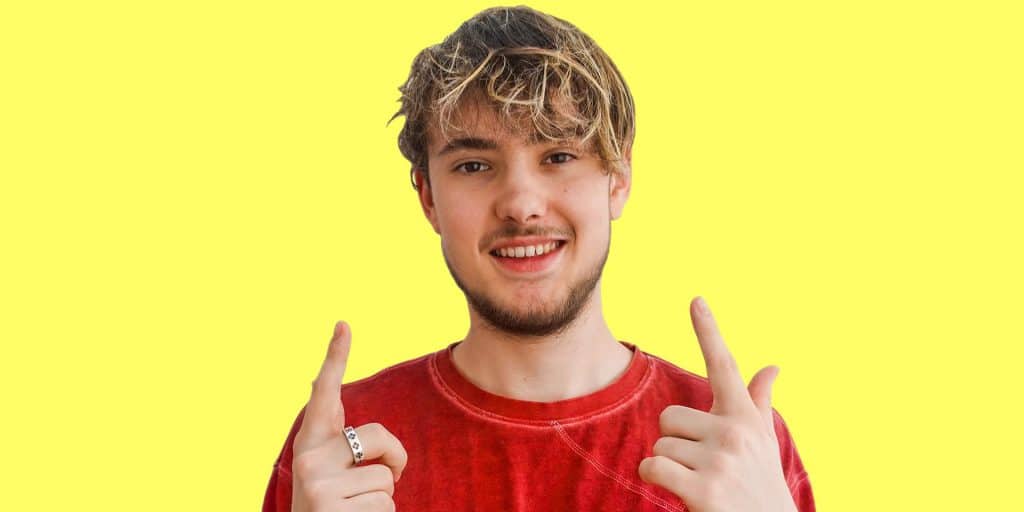 Benjamin ‘Ben’ Lasky, known better online as Quadeca, was born in Los Angeles, California USA, on 2 October 2000 – his zodiac sign is Libra, he holds American nationality, and is of Canary Islander (Spanish) and Ashkenazi Jewish descent. He’s a rapper, YouTuber, former video game commentator, and a producer who’s perhaps known best for his YouTube channel “Quadeca”, which he launched on 12 June 2012. The channel’s today subscribed to by close to two million people, and numbers over 220 million views of all his videos combined. Quadeca’s mostly focused on uploading his original music videos, as well as his ‘intense football/soccer’ videos.

Quadeca was raised in Los Angeles alongside his younger sister Natasha Lasky, by their father Mitch Lasky, who’s a general partner at venture capital firm Benchmark, and their mother who prefers to stay away from the media’s attention.

Quadeca grew up being interested in sports, and began playing both football and soccer upon enrolling at a local elementary school. He was just 12 years old when he launched his YouTube channel, and initially focused mostly on uploading videos related to the video game “FIFA”, and to video game commentating. In 2015, he enrolled at Menlo School, and soon became the captain of the school’s soccer team; Quadeca matriculated in 2019, and then chose to focus on his YouTube channel, rather than to pursue a college degree.

Quadeca’s perhaps known best for the music he makes, and we’re going to mention three of his most popular YouTube videos, which have helped him gain many subscribers.

His #1 video – “Quadeca – Insecure (KSI Diss Track) Official Video” – has been watched close to 36 million times since 23 November 2018, and features him dissing the British YouTuber KSI, who has over 23 million subscribers on his channel.

Quadeca’s second most popular video “20 Styles of Rapping! (LOGIC, XXXTENTACION, 6IX9INE & MORE)” features Quadeca explaining the various ways in which one can rap, and has been viewed over 13 million times since 25 March 2018.

His third most popular video “Reacting to KSI reacting to my “INSECURE” DISS TRACK!” has been watched more than 6.6 million times since 28 November 2018 – the title’s quite self-explanatory.

Career as a hip hop artist

It was in 2014 that Quadeca began uploading his original music onto his YouTube channel, and in February of that year, he performed at a talent show at his school. His debut album “Work in Progress” was released on 16 September 2015, and his song “Wii Music Fire” became a hit, having been streamed more than a million times on the Swedish audio streaming network Spotify. In May 2016, Quadeca’s released his second album, entitled “Nostalgia for the Now”.

His third album “Bad Internet Rapper” was co-written by Arska Pimenov, co-produced by Young Taylor, and was released on 31 January 2017, followed by Quadeca’s fourth album “Out of Order”, on 10 November 2017, and at the beginning of 2018, Quadeca released two new songs, entitled “Heart Attack’ and “Clouted Up”.

It was in the second half of the year that KSI called out several YouTuber rappers, claiming that they were fake – Quadeca then released his diss track, which was viewed more than eight million times in just over a week; KSI stated that he liked the track, and released his own diss track “Ares” in November, which Quadeca also enjoyed.

On 8 March 2019, Quadeca’s fifth album was released, entitled “Voice Memos”, which peaked at #42 on both the Billboard Independent Albums Chart and the Heatseekers Albums Chart.

On 12 April 2019, KSI and Randolph released their new album “New Age”, which featured Quadeca on the song “Roll the Dice”, and on 21 April 2019, he released his song “Not a Diss Track”. Quadeca then went on to release a couple of singles, such as “Anti Drug”, “Tomfoolery” and “I Don’t Care”. In April 2020, he released “Where’d You Go”, the lead single of his new album “From Me To You”, which came out on 30 March 2021 through the British music distribution company AWAL.

Quadeca has stated that some of his main influences are Tyler, The Creator, Frank Ocean and J Cole.

Quadeca’s highly secretive when it comes to his love life, and hasn’t spoken of any girls (or boys) whom he has perhaps been with. This is mostly why there are several rumors circulating the internet concerning his sexual orientation, and current relationship status.

Some of Quadeca’s fans believe that he’s today in a relationship with the Spotify user kaylaa.z, as she’s the only non-artist whom he’s following on the network, while they have both commented many times on each other’s posts.

There are also those who claim that Quadeca’s gay, and that this is why he hasn’t spoken of the girls whom he has perhaps been with, however, no evidence has been provided to support these claims, nor has Quadeca commented on this.

As of August 2021, he seems to be single, hasn’t married, and doesn’t have children.

Quadeca enjoys spending his spare time in nature, and his Instagram account is filled with pictures taken at various natural destinations; he enjoys being active on the network, and is today followed by close to 250,000 people, while he’s uploaded over 60 pictures.

Winter is his favorite season, as he loves snow and enjoys going skiing and snowboarding.

Quadeca’s a dog-lover, and his pet dog can be seen featured in some of his Instagram pictures.

He’s keen on travelling, and has already been to various US states, as well as several European countries, including England and Germany.

Quadeca likes to watch movies late at night, and his favorite actor and actress are Vin Diesel and Natalie Portman, while a couple of his favorite movies are the franchise “Pirates of the Caribbean”, “The Guardians of the Galaxy” and “Leon: The Professional”.