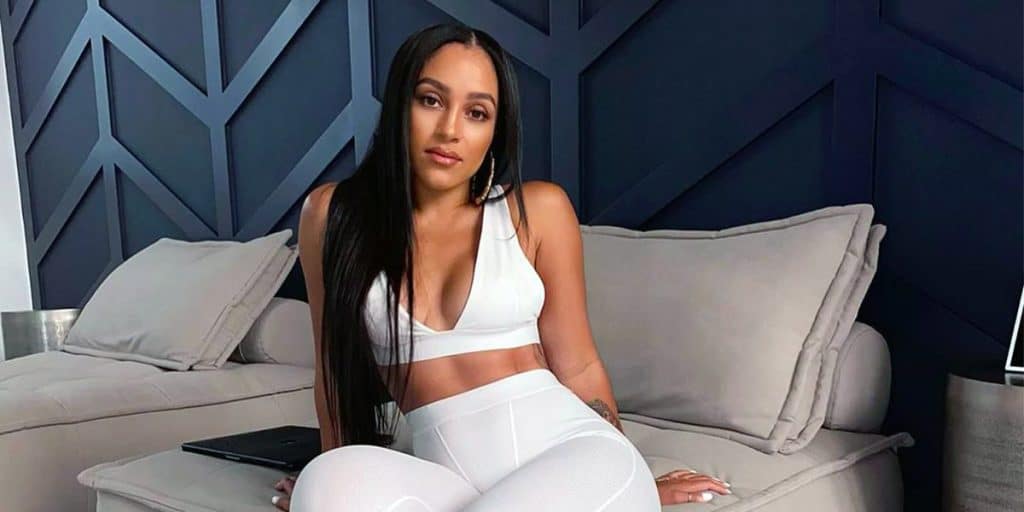 Joie Chavis was born in Torrance, California USA, on 27 September 1988 – her zodiac sign is Libra and she holds American nationality. She’s a social media star and an entrepreneur, but probably known best for her past relationship with Future, a popular American rapper and singer-songwriter.

Joie was raised in Torrance by her parents about whom nothing’s known as they prefer to stay away from the spotlight; her father’s said to be a factory worker, and her mother a hair stylist.

Joie grew up being interested in modelling, and she also started to listen to rap music at a very early age.

She attended a local high school at which she was interested in playing sports, and was apparently also a cheerleader. Joie also tried writing rap songs and performing them, but soon learned that she wasn’t talented enough to succeed in the rap music industry.

She matriculated in 2006, and then chose not to pursue a college degree but to find work and financially support herself.

Joie’s active on various social media networks, and is followed by more than 1.8 million people on Instagram, while she’s uploaded close to 500 pictures, many of which have her buttocks and breasts in focus. She also often features her children in her photographs.

She launched her Twitter account in February 2016, and it’s today followed by close to 5,000 people – she tends to tweet once every couple of months. Joie also has a Facebook page followed by more than 13,000 people.

She’s a TikTok star with over 350,000 followers, and has amassed more than 2.6 million likes of all her videos combined, which most often feature her dancing and lip syncing.

Joie launched her YouTube channel “Joie in Life” on 18 July 2018, and it’s today subscribed to by over 130,000 people, and numbers close to five million views of all her videos combined.

In these videos, Joie gives her fans advice regarding working out and dieting, and she can also be seen working out herself. Her most popular video – “What I Eat in a Day | Joie Chavis” – has been watched over 400,000 times since 3 March 2020.

Joie’s also an entrepreneur, as she has launched her own online retail store – Shai – which she named after her daughter.

In 2010, Joie began dating Bow Wow, an American rapper and actor whose net worth has been estimated at over $1.5 million. It was soon revealed that Joie had given birth to their daughter, Shai Moss which came as a shock to their fans as it was revealed only a couple of months earlier that they were dating. In 2013, Joie and Bow Wow split for unknown reasons.

They reconciled in 2016 because they wanted their daughter to be raised by both parents, however, the two split once again in 2017.

Joie then dated several rappers including Bu Thiam and Hit-Boy, and in June 2018 revealed that she was pregnant, and that the baby’s father was the rapper Future, but that they were no longer together; in late 2018, she gave birth to their boy Hendrix.

Joie hasn’t spoken of any men whom she could be dating today, sod as of May 2021, she’s single, hasn’t married and has a daughter and a son.

Joie’s passionate about working out, and has several training sessions at the gym each week, thus her slim figure. She’s also following a designed specifically for her, which means Joie doesn’t eat fast food or anything with sugar in it; a couple of her favorite foods are fish and chicken.

She spends most of her spare time with her children, and can be seen taking them to school and to parks.

Joie’s keen on travelling, and prior to giving birth to her son, she had visited many US states, but apparently hasn’t travelled overseas.

She likes to go shopping alone – her favorite color of clothes is black.

Late at night if not too tired, Joie enjoys watching romantic comedy movies such as “To All the Boys I’ve Loved Before”, “Always Be My Baby” and “Crazy Rich Asians”; her favorite actor and actress are Matt Damon and Julia Roberts.

Who is her former boyfriend Future?

Nayvadius DeMun Wilburn, better known by his professional name Future, was born in Atlanta, Georgia USA, on 20 November 1983 – his zodiac sign is Scorpio and he holds American nationality. He gained recognition with the release of his debut album in April 2012 entitled “Pluto”, and has since been making his way up in the music world as a rapper.

Future was raised in Atlanta and studied at Columbia High School. His cousin Rico Wade, a member of the music collective The Dungeon Family and a record producer, encouraged him to try writing rap songs and pursue a career as a rapper.

Future matriculated in 2001, and then worked various jobs to financially support himself while writing songs in his spare time; he didn’t gain recognition until the late 2000s when he signed a contract with the label A1 Recordings.

In 2010 and 2011, he released a few mixtapes such as “Dirty Sprite”, “True Story” and “1000”. In September 2010 he was signed to Epic Records, and released his new mixtape “Streetz Calling”, followed by another mixtape “Astronaut Status” in January 2012. The single “Magic” from his debut album was Future’s first single to chart on the Billboard Hot 100.

On 20 September 2015, Future and the Canadian rapper Drake collaborated on the mixtape “What a Time to Be Alive”, which topped the Billboard 200 and Billboard Hot Rap Songs charts.

Future’s self-titled fifth album was released on 17 February 2017, and a week later his sixth album, “Hndrxx” was released, both of which topped the Canadian Albums and the Billboard 200 charts. On 10 February 2019 at the 61st Annual Grammy Awards, Future was nominated for his first two Grammys for Best Rap Song and Best Rap Performance.

Most recently on 13 November 2020, he and the American rapper Lil Uzi Vert released their collaborative album “Pluto & Baby Pluto”, which reached #2 on the Billboard 200 Chart.

Future has fathered six children with six women, while another woman from Florida claims that he’s the father of her daughter; if a DNA test proves positive, that would raise the number of his kids to seven.