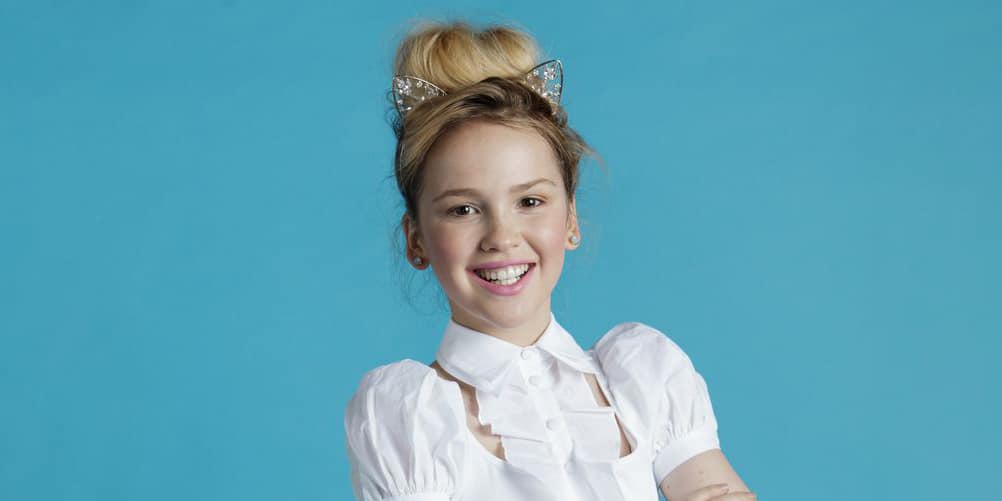 All About Talitha Bateman: Siblings, Age, Parents, Net Worth

Who is Talitha Bateman?

Talitha Eliana Bateman was born in Turlock, California USA, on 4 September 2001 – her zodiac sign is Virgo and she holds American nationality. She is an actress who is perhaps known best for her portrayal of Janice, one of the lead characters in the 2017 horror mystery thriller movie “Annabelle: Creation” which also starred Anthony LaPaglia, Samara Lee and Miranda Otto, and follows a doll-maker who welcomes a nun and several orphans into his home who are then targeted by the possessed doll, Annabelle. The movie was nominated for eight awards, winning one.

Talitha was raised alongside seven siblings in Turlock by their father Tim and mother Jonelle Bateman.

Jonelle has stated that all of their children showed an interest in and talent for acting at quite an early age, but besides Talitha, it appears that only Gabriel Bateman has become a successful actor. He is known best for his starring roles in the horror movies “Annabelle”, “Lights Out” and “Child’s Play”.

Talitha was still attending elementary school when she became interested in acting, and made her debut film appearance in the 2012 action comedy “George Biddle, CPA”, written and directed by Nick Walker, and which starred Cade Tomasegovich, Colton Dennis and Mary Pieczarka. The movie attracted little attention and it gained mixed reviews. The following year saw her star as Young Molly’s Friend in the short drama movie “The Park Bench”, and Talitha then also made her debut TV series appearance in an episode of the critically acclaimed comedy “The Middle”.

She continued acting while also being focused on her studies, but upon matriculating in 2019, Talitha decided not to attend college, but to rather focus on her career as an actress.

In 2014, Talitha appeared in the pilot of the family series “Maker Shack Agency” but which wasn’t picked up by any network, then in 2015 she portrayed the supporting character Scarlett Kincaid in three episodes of the romantic comedy “Hart of Dixie”, created by Leila Gerstein and which starred Rachel Bilson, Jaime King and Cress Williams. It follows Zoe Hart who accepts work with Dr. Harley Wilkes in Bluebell, Alabama, however, arriving there from New York, she finds him dead and learns that he’d left his practice to her. The series was nominated for five awards, winning one.

In 2017, Talitha appeared in the episode “Stuck with a New Friend” of the family comedy “Stuck in the Middle”, which won four awards out of the eight it was nominated for, and then portrayed Laura Moore in the 2019 episode “A Story of More Woe” of the mystery crime drama “Law & Order: Special Victims Unit”.

Most recently, in 2020 Talitha starred as Alexi Logan in all 10 episodes of the romantic science fiction drama “Away”, created by Andrew Hinderaker, and which also starred Hilary Swank, Josh Charles and Vivian Wu. It follows an American astronaut who has to say goodbye to her husband and daughter now that she is flying out to space on a high-risk mission. The series was nominated for three awards, winning one.

The year 2014 saw Talitha portray supporting characters in several movies: the short family drama “Life Grows On” written and directed by Alyson Andrews who also starred in it, the romantic horror “Petals on the Wind”, and the science fiction horror thriller “The Hive”.

Talitha went on to star as Beef in the short comedy “We Make That Lemonade”, and in 2016 she appeared in the hit action adventure science fiction “The 5th Wave”, which starred Chloe Grace Moretz, Matthew Zuk and Gabriela Lopez, and follows Cassie and her brother running away after four alien attacks on Earth. Her following notable performance was in the 2016 family comedy “Nine Lives”, which follows a successful businessman transferred into the body of the family cat, and the same year saw her appear in the drama “So B. It” and the comedy “Mamma Dallas”.

In 2017, Talitha portrayed Bethie, one of the lead characters in the action thriller “Vengeance: A Love Story”, which starred the famous actor Nicolas Cage, and follows a group of people helping a single mother put those who raped her behind bars. She also starred alongside Gerard Butler and Jim Sturgess in the 2017 science fiction thriller “Geostorm”, then in 2018 Talitha appeared in the critically acclaimed romantic comedy “Love, Simon”, which follows Simon who is gay, and was keeping it a secret until someone revealed it to his family and friends. The movie won 10 awards out of the 36 it was nominated for.

Three of Talitha’s most recent roles in movies have been in the 2018 romantic drama “Just Between Us”, the 2019 historical action “Robert the Bruce”, and the 2019 horror thriller “Countdown”, in which she starred alongside Elizabeth Lail and Jordan Calloway.

Talitha has appeared in only one TV special, “The 2018 MTV Movie & TV Awards”.

In 2017, she was invited to make a guest appearance in episodes of various talk-shows, including “IMDb at San Diego Comic-Con”, “Made in Hollywood” and “Build”. Talitha has also appeared in an episode of talk-shows “Home & Family” and “Entertainment Tonight”.

She has been nominated for a single award: a 2018 MTV Movie + TV Award for Most Frightened Performance for “Annabelle: Creation”.

Talitha is very secretive when it comes to her love life, and hasn’t spoken about any boys or girls she has perhaps dated, and this is only one of the reasons why there are rumors circulating the internet concerning her relationship status, as well as her sexual orientation.There are many people out there who believe Talitha to be a lesbian, as she hasn’t been seen spending time with any boys, and is nearly always surrounded by girls. She has also uploaded many pictures with girls onto her Instagram account, so some of her fans believe that one of these might be her girlfriend.

Conversely, there are also those who claim that Talitha is dating a mysterious boy, but is keeping him and the relationship away from the media’s attention, because of how it might affect her career.

Talitha hasn’t commented on any of the rumors.

As of February 2021, she appears to be single, hasn’t married and doesn’t have children.

Talitha is interested in playing sports, including soccer and tennis while attending high school. She has recently learned to use the bow and arrow for one of her movies.

She likes to dress-up, whether or not for Halloween, her movie roles or a random costume party – and some of her outfits can be seen featured in a couple of her Instagram pictures.

Summer is her favorite season as she enjoys sun tanning at the beach and being close to the ocean, however, Talitha also likes winter and loves snow.

She is a highly social person who gets along easily with her colleagues, but also finds it hard to separate from them after shooting for a movie or TV series ends.

In her spare time, Talitha enjoys watching movies starring her favorite actor and actress – Channing Tatum and Amanda Seyfried – a couple of her favorite films are “Dear John”, “21 Jump Street” and “Step Up”.