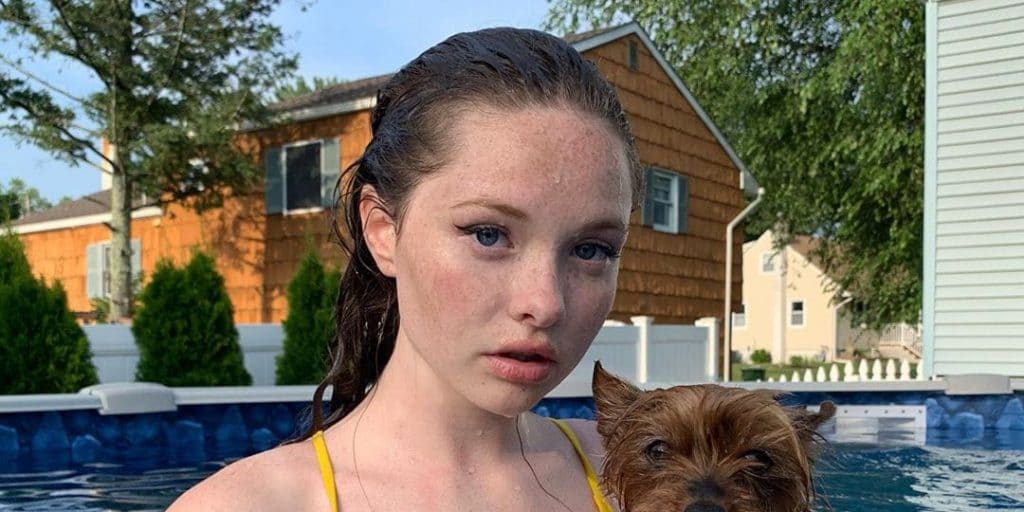 Who is Zoe Margaret Colletti?

Zoe Margaret Colletti was born in Burlington, New Jersey USA, on 27 November 2001 – her zodiac sign is Sagittarius and she holds American nationality. She is an actress who might be known best for her portrayal of Stella Nicholls, one of the lead characters in the 2019 mystery adventure horror movie “Scary Stories to Tell in the Dark”, written by Dan Hageman and Kevin Hageman, directed by Andre Ovredal and which also starred Michael Garza and Gabriel Rush – the film follows Stella and her two friends who meet a serial killer on Halloween in 1968. It won four awards, and was nominated for five others.

Zoe was raised in Burlington alongside her brother Ian by their parents Christopher and Cheryl – Christopher is of Italian descent while Cheryl is of German and Dutch ancestry. Zoe is quite close to her family, as can be seen in some of her Instagram pictures.

Zoe was only five years old when her parents helped her win her first role in the 2006 comedy film “American Man”, which follows five men who become friends because their kids are friends – in the movie, Zoe played one of three lead characters alongside Sean Astin and Robert Bagnell.

Zoe became physically active while attending high school, as she started playing soccer and ran track. Upon matriculating in 2019, she chose not to enroll at a college but to focus on her career as an actress.

She gained recognition by the end of 2010 when she portrayed Sophie Young in four episodes of the mystery crime drama “Rubicon” created by Jason Horwitch and which starred James Badge Dale, Jessica Collins and Lauren Hodges – this series of 13 episodes follows the life of the analyst Will Travers who is working at a federal intelligence agency.

As Zoe was mostly focused on appearing in movies in the following years, her next role in a TV series came in 2019, when she appeared as Britney Moore in a single episode of the mystery crime drama “Law & Order: Special Victims Unit”.

She then went on to star as Benedetta Rohr in seven episodes of the thriller crime drama “City on a Hill”, created by Chuck MacLean and which starred Kevin Bacon, Aldis Hodge and Jonathan Tucker – it follows an FBI veteran and an attorney working together on a case in Boston in the ‘90s.

Her most recent role has been in 11 2020 episodes of the science fiction horror drama “Fear the Walking Dead”, which is about two families fighting ‘the walking dead’ in Los Angeles.

In 2014, Zoe played Tessie in the family comedy drama “Annie”, written and directed by Will Gluck, and which starred Quvenzhane Wallis, Cameron Diaz and Jamie Foxx – it follows a business tycoon who decides to take in a mean woman and her foster child.

The year 2015 saw Zoe play Phoebe in the comedy “Nerd Nerd”, and three years later she played Ruth-Ann, one of the lead characters in the drama “Wildlife – the film was written and directed by Paul Dano, starred Jake Gyllenhaal and Ed Oxenbould, and follows a teenage boy whose father abandons the family temporarily after taking a dangerous job. It won six awards and was nominated for 23 others.

Two of Zoe’s most recent roles in movies have been in 2018, in the  biographical crime drama “Skin”, which starred Jamie Bell and Danielle Macdonald, and the short comedy “Lucy in the Sky” in which she starred alongside Kelly Hu and Whoopi Goldberg. Zoe has recently been cast to appear in two upcoming movies: “A Boy Called Christmas” and “Scary Stories to Tell in the Dark 2”.

Zoe is more or less secretive when it comes to her love life, but it’s known that she started dating Ed Oxenbould in November 2016, after having met on a movie set a year prior. Ed is an Australian actor born on 1 June 2001, in Melbourne Victoria, who gained recognition after he starred in the 2012 short film “Julian” – he then appeared in the coming of age comedy series “Puberty Blues” from 2012 to 2014, while a couple of his following roles were in the movies “Alexander and the Terrible, Horrible, No Good, Very Bad Day”, “Paper Planes” and “The Visit”.

They started dating when they were both 15 years old, and have been together to this day. It appears that Ed is Zoe’s first boyfriend; as of December 2020, she is in a relationship, hasn’t married and doesn’t have children.

Zoe likes to dress up for Halloween, and this year chose a little pixie costume for herself – she is also keen on dressing up for no reason, and has recently created a costume of the pink character from the video game “Among Us”.

Zoe is a cat-lover and has two pet cats, while she also has a dog and two ducks which can be seen featured in some of her Instagram pictures.

She likes summer the most of the seasons, as she enjoys taking pictures at the beach, swimming in the ocean and sun tanning.

In her spare time, Zoe likes to watch movies starring her favorite actors and actresses Matt Damon, Jim Carrey and Amanda Seyfried, such as “Good Will Hunting”, “Bruce Almighty” and “Letters to Juliette”.