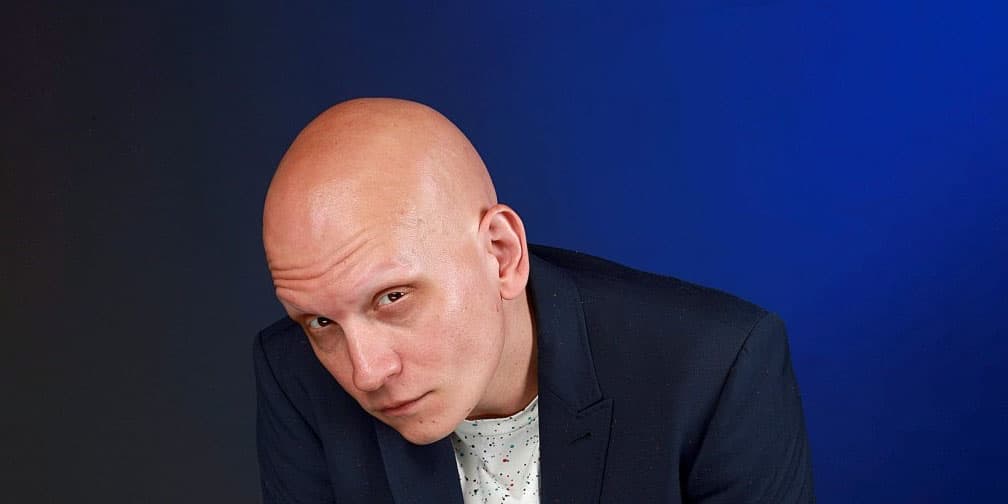 Who is Anthony Carrigan?

Anthony Carrigan was born in Boston, Massachusetts USA, on 2 January 1983 – his zodiac sign is Capricorn and he holds American nationality. He is an actor who is perhaps known best for his portrayal of NoHo Hank in the action crime comedy series “Barry”, created by Bill Hader who also starred in it alongside Stephen Root and Sarah Goldberg. It follows a hitman who comes to Los Angeles from the Midwest and becomes a theatre actor. The series aired in 2018 and 2019 and won 23 awards, while it was nominated for 90 others including six Golden Globes.

Anthony was raised in Boston alongside his sister Deidre Claire, by their parents about whom nothing is known as they prefer to stay away from the media’s attention.

Anthony was three years old when he was diagnosed with Alopecia Areata, a disease which caused him to lose all his hair including eyelashes and eyebrows. He has learned how to live with this condition, and it’s actually helped him win roles in various movies, especially as a villain. Anthony became interested in acting while attending high school, and upon matriculating in 2002, he enrolled at Carnegie Mellon University from which he graduated with a Bachelor of Arts degree in 2006.

Anthony made his debut TV series appearance in 2008, with his portrayal of H. Jack Walker III in the episode “Legacy” of the mystery crime drama “Law & Order: Criminal Intent”.

He gained recognition in the following year after his portrayal of Tyler Davies in the crime drama “The Forgotten”, created by Mark Friedman, and in which he starred alongside Christian Slater and Michelle Borth. The series follows a group of people who managed to find out that two people who were murdered were John and Jane Does; Anthony had to wear artificial eyebrows and a lot of make-up for the role.

The year 2011 saw him play Cory Smith in the comedy “Parenthood”, which was a hit as it won 15 awards while being nominated for 39 others, including a Golden Globe. He went on to make guest appearances in one or two episodes of various series, such as the action adventure “The Flash”, the mystery crime drama “The Blacklist”, and the science fiction crime mini-series “Hard Sun”.

In 2014, he was cast to play the supporting character Victor Zsasz in the action crime drama “Gotham” which follows the life of Detective James Gordon before Batman arrived in Gotham – the series won seven awards including a Primetime Emmy before ending in 2019.

Anthony’s most recent starring role has been in the TV series “Barry”, through 2018 and ’19.

Anthony made his debut film appearance in the 2008 drama “Long Island Confidential”, which failed to attract any attention and received mixed reviews, then in 2009 he starred alongside Robin Weigert and Jay O. Sanders in the thriller “The Undying”, which follows Barbara Haughton who falls in love with the ghost of a soldier who died during the Civil War.

The year 2011 saw Anthony star as Byron in the short comedy “Lightweight”, while the following two years saw him appear in the thriller “Hand of God” and the drama “Over/Under”.

In 2016 he portrayed Leo in the short movie “Woman in Deep” written and directed by Janicza Bravo, and which follows a woman who is put on hold after calling a suicide prevention line, and the same year also saw him appear in the horror “Satanic”, but which received poor reviews.

In 2019, Anthony starred as Darren in the short comedy “The Toll Road”, and his most recent role in a movie has been in the 2020 musical adventure comedy “Bill & Ted Face the Music”, which starred Alex Winter, Keanu Reeves and Kristen Schaal, and follows two middle-aged fathers still hoping to become famous musicians. The movie was nominated for eight awards.

He wrote the 2015 short biographical movie “#BeYou”, which follows him and the actress Jannica Olin, both of whom suffer from Alopecia.

Anthony has made guest appearances in various talk-shows, such as “The Artists Report”, “Stars in the House” and “The Hollywood Moment at Home Edition 2020-“.

Anthony has been nominated for six awards for his performance in “Barry” without winning any.

Anthony is a married man. He met his future other half, Gia Olimp at New York City’s Broadway-Lafayette Street train station in 2015, and on 22 June 2018, the two exchanged vows in a private ceremony attended by their closest friends and family. It appears that they have agreed not to have children, but to focus on their careers.

Gia is trying to stay away from the media’s attention, and it’s only known that she is a professional chess player.

Anthony hasn’t spoken about any other women he has perhaps dated, but there are rumors circulating the internet that he was in several relationships before meeting Gia. As of February 2021, he is married to Gia Olimp; they don’t have children.

Mostly because of his own condition, Anthony is today an advocate for body positivity and a fighter for human rights. He also supports the movement Black Lives Matter.

Anthony is not very interested in politics, but being dissatisfied with how Donald Trump ran the US he urged people to vote in the 2020 election – he voted for Joe Biden.

He likes to watch sports on TV, and his favorites are football and baseball.

Anthony likes to travel and has been to nearly all the US states thanks to his acting career, while he has also been to a couple of European countries, including France and England.

He has his own favorite actors and actresses, some of whom are Chadwick Boseman, Tom Cruise and Angelina Jolie, and a couple of his favorite movies are “The Black Panther”, “The Last Samurai” and “Lara Croft: Tomb Raider – The Cradle of Life”.

Hair, eyebrows and net worth

As of February 2021, his net worth has been estimated at over $5 million.