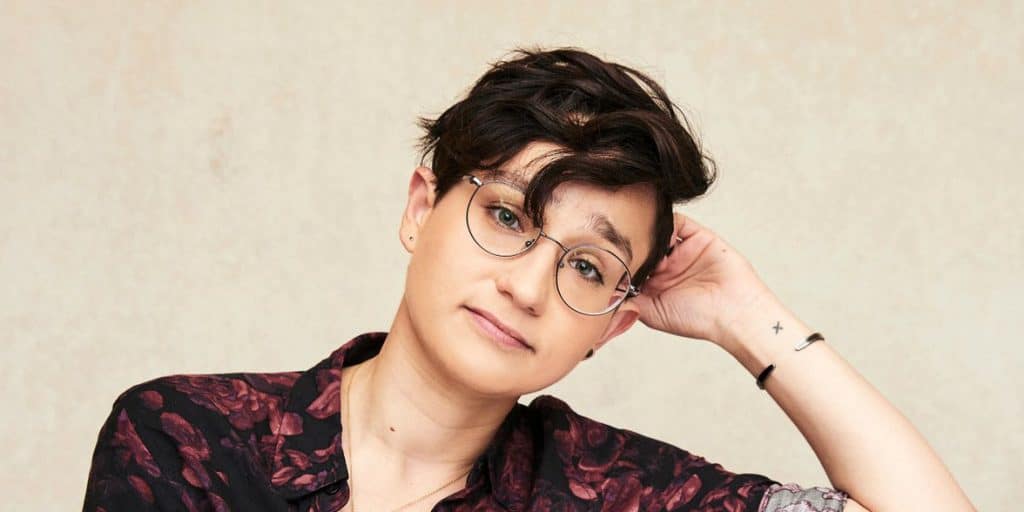 Is Bex Taylor-Klaus married? Is he gay or dating girlfriend? Wiki

Who is Bex Taylor-Klaus?

Rebecca Edison ‘Bex’ Taylor-Klaus was born in Atlanta, Georgia USA, on 12 August 1994 – their zodiac sign is Leo and they hold American nationality.

Are they married or have a girlfriend/boyfriend?

Bex was very secretive regarding their love life until November 2016 when they came out as lesbian on Twitter confirming the rumors which were circulating the internet for years before. In their tweet, Bex wrote: ‘hello my name is bex and yes the rumors are true I am gay.’ They went on to state in July 2018 that they are non-binary and would like to be referred to with the pronouns ‘they’ and ‘them’, hence the terminology in this article.

The two announced in August 2019 that they were engaged and in October 2020, they married in a private ceremony attended by their closest friends and family.

Bex hasn’t talked about any other girls they have perhaps dated and as of February 2021, they are married to Alicia Sixtos and the two don’t have children.

Bex was raised in a Jewish family in Atlanta alongside their siblings Josh and Syd by their parents Elaine and David about whom is nothing is known as they prefer to be left out of media.

Bex was very sporting growing up as they began playing softball at quite an early age while they were nine when they started appearing in Shakespeare plays at school. Bex joined their high school’s drama club as well as its softball team and upon matriculating in 2012, they moved to Los Angeles in California and enrolled at Bridges Academy from which they graduated with a Bachelor of Arts degree in 2016.

They are an actor,  perhaps known best for their portrayal of Bullet in the mystery crime drama series “The Killing” created by Veena Sud and which starred Mireille Enos, Joel Kinnaman and Billy Campbell. It follows the police investigation and the grieving family of a 17 years old girl found dead in the trunk of a car hidden underwater. The series aired from 2011 to 2014 and won three awards while it was nominated for 48 others including one Golden Globe.

Bex made their debut film appearance in the 2012 short comedy “Mental Intervention” written and directed by Aaron Daniel Jacob who also starred in it, and they went on to appear in several other shorts such as the 2013 horror drama “Last Seen”, the 2014 fantasy drama “The Night Is Ours” and the 2015 horror “Scream: Killer Party”.

Their first feature movie was the 2015 action adventure fantasy “The Last Witch Hunter”, which starred Vin Diesel, Rose Leslie and Elijah Wood, and follows the only remaining witch hunter on Earth, who is the only obstacle preventing the witches from ruling the world. The year 2018 saw them star as Taylor in the horror thriller “Hell Fest”, which follows a group of friends being killed one by one at a horror-themed amusement park – the movie won a ReFrame Stamp for Feature.

The same year saw Bex appear in three other movies: the horror thriller “Discarnate”, the short drama “The Line” and the comedy “Dumplin’” which starred Jennifer Aniston and Danielle Macdonald, and was nominated for nine awards including one Golden Globe. Bex then starred in the shorts “Knight Watch” and “13 Reasons Why: Season 3 Promo”, and was then cast to play Chris in the drama “Blackbird” which won one of the two awards for which it was nominated.

Bex is currently shooting for the upcoming drama movie “Triage” set to be released by the end of 2021.

They have also voiced characters in two video games: in 2017, they voiced Pidge in “DreamWorks Voltron VR Chronicles”, and they voiced Keo Venzee in “Star Wars: Squadrons” in 2020.

Bex’s role in “The Killing” was also their debut TV series appearance, and in 2014 they were cast to play the supporting character Lex in the comedy “House of Lies” created by Matthew Carnahan and which starred Don Cheadle, Kristen Bell and Ben Schwartz. It follows a team of management consultants as they trick CEOs of powerful companies into signing big deals. The series won six awards including a Golden Globe, and it was nominated for 33 other awards.

In 2015, Bex was cast to star as Audrey Jensen in the crime horror drama “Scream: The TV Series” which also starred Willa Fitzgerald and John Karna, and follows a group of teenagers being killed by a serial killer.

It aired for two years and won three of 13 awards it was nominated for.

Bex’s most recent role in a TV series has been in all 13 episodes of the 2020 action crime drama “Deputy”, which follows the deputy Bill Hollister as he becomes the new sheriff of Los Angeles County.

Bex provided the artwork for the 2019 short movie “Luzy”.

They are currently making their producing debut with the pilot episode of the upcoming series “Polyester”.

Bex has been invited to make a guest appearance in various talk-shows, such as “TinaQ’s Celebrity Interviews”, “The John Kerwin Show” and “Made in Hollywood”.

They have been nominated for eight awards winning three. In 2014, they and their colleagues won a Joey Award for Young Ensemble Cast in a Dramatic TV Series for their performance in “The Killing” and in both 2017 and 2018, they and their new colleagues won a Behind the Voice Actors People’s Choice Voice Acting Award for Best Vocal Ensemble in a Television Series for “Voltron: Legendary Defender”.

Some of the other awards they’ve been nominated for include a 2016 TV Guide Award for Favorite Ensemble for “Scream: The TV Series”, a 2015 Burbank International Film Festival Award for Best Actress for the short film “Riley”, and a 2020 Shorty Award for Best Actor.

Bex was diagnosed with attention deficit hyperactivity disorder (ADHD) while still attending elementary school, and they learned how to cope with the condition thanks to numerous sports which they played. They have allegedly also been diagnosed with depression and anxiety, but they are even today physically very active, and have several training sessions at the gym each week, while they also occasionally go running.

They are a huge fan of comedy, and have watched numerous famous stand-up comedians perform, while their favorite is the late Robin Williams.

Bex enjoys spending free time in nature, and once spent around 20 days kayaking and rafting on the river Colorado.

They love dogs, and have a pet dog called Bullet.

Bex has their own favorite actresses, some of whom are Emma Watson, Anne Hathaway and Amanda Seyfried, and a couple of their favorite movies are the franchise “Harry Potter”, “Les Miserables” and “One Day”.