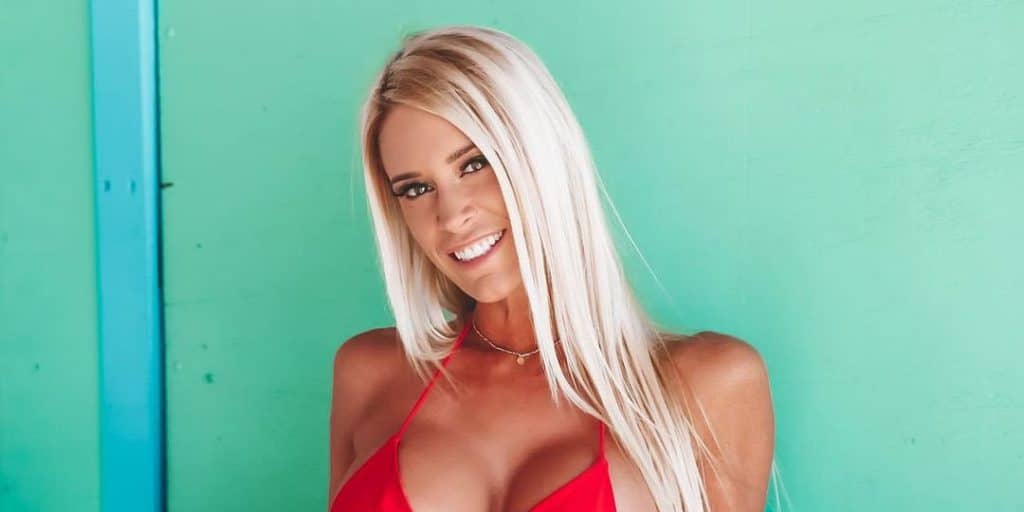 Who is Ashley Kolfage?

Ashley Goetz was born in Tucson, Arizona USA on 16 September 1985 – her zodiac sign is Virgo and she holds American nationality. She’s a model and a social media star, but who’s probably known best for being the wife of Brian Kolfage, a US Air Force veteran and the man who founded the organization We Build the Wall which was gathering donations for the building of the wall on the border between the USA and Mexico.

Ashley was raised in Tucson by her parents, about whom nothing is known as they prefer to stay away from the media’s attention. She hasn’t spoken about having any siblings, and is thus believed to be an only child.

She attended Central High School at which she was physically active, as she played tennis for the school’s team while she also practiced volleyball and soccer, as well as acting with the school’s drama club. Ashley matriculated in 2004, and while she hasn’t spoken about her further education, it’s widely believed that she went on to attend Angelo State University from which she graduated with a Bachelor’s degree in education in 2008.

Ashley has been working as a model for over a decade now and is today signed to Arizona Modeling Co. She has done many brand endorsements, including for Dad Brand Apparel, Military Grade Coffee Company, and Aqua Medical Spa.

Ashley has also appeared in various magazines, and once almost made it onto the cover page of “Maxim”.

According to her Facebook account, Ashley’s today working as a real estate agent, and is running the clothing boutique Coconut Chic.

Ashley’s presence on the internet

Ashley’s very active on Instagram and is today followed by around 380,000 people, while she’s uploaded over 2,200 pictures onto her account, most often having her breasts and buttocks in focus. She’s also active on TikTok, and is followed by over 610,000 people, and has gathered over 5.5 million likes of all her videos combined.

Ashley has her own website on which one can read more about her life, take a look at the pictures in her gallery, and contact her in case of any questions or suggestions.

Ashley once worked as a hostess at Chili’s Grill & Bar, where she met Brian Kolfage when he came to eat at the restaurant. That was in the early 2000s, and on 28 May 2011, the two exchanged vows in a private ceremony attended by their closest friends and family members. In 2012, Ashley gave birth to their daughter, and their son followed in 2014. The two children can be seen featured in many pictures uploaded onto Ashley’s Instagram account – most of these were uploaded during the time when they weren’t allowed to go to school because of the coronavirus situation.

As of March 2021, the family of four seems to be leading a happy life together in a golf community in Miramar, Florida.

Ashley hasn’t spoken about any other people she had perhaps dated before meeting Brian, however, it’s known that he was once married to a woman called Paige, whom he divorced after falling in love with Ashley.

Ashley’s physically very active as she has four to five training sessions at the gym each week, thus her slim figure. She’s also following a strict diet, and is playing various sports including golf, tennis and boxing. She’s also involved in Cross Fit.

She’s keen on travelling, and has been all around the USA for both work and pleasure, while she has also been to several South American and European countries such as Brazil (South America), France and England (Europe).

She’s not a lover of animals, and thus doesn’t have any pets.

In her spare time, Ashley’s keen on watching movies – her favorite actors and actresses are Leonardo DiCaprio, Matt Damon and Anne Hathaway, and a couple of her favorite movies are “Titanic”, “Shutter Island” and “One Day”.

She’s hoping to launch her own acting career as well.

Who is Brian Kolfage?

Brian Kolfage was born in Detroit, Michigan USA, on 21 September 1982 – his zodiac sign is Virgo and he holds American nationality. He’s probably known best for having managed to gather $25 million for the building of the wall between the USA and Mexico – he was initially hoping to gather over $1 billion.

He was raised in Dearborn Heights, Michigan before moving to Waikiki in Hawaii – his parents went on to divorce.

He attended a local high school and upon matriculating in 2000, Brian enlisted into the US Air Force. In 2003 he served in Kuwait, while the following year saw him deployed to Iraq. On 10 September 2004, he was seriously wounded in Balad, Iraq, when a rocket landed close to him, virtually severing his legs and his right arm, which thus had to be amputated. Brian recovered at Walter Reed Medical Center and received the United States military decoration The Purple Heart, awarded to all US military personnel wounded in action. Following his recovery, he began working at Davis-Monthan Air Force Base as a civilian, and in 2012, Brian was invited as the special guest of Gabrielle Dee Giffords at President Barack Obama’s State of the Union address.

With the help of the Pat Tillman Foundation, Brian went on to attend the University of Arizona from which he graduated with a Bachelor’s degree in architecture in 2014.

He launched a GoFundMe project in December 2018 – in three days, around $9 million was gathered, so in January 2019, he created the non-profit organization We Build The Wall Inc. which, together with the GoFundMe page, eventually gathered around $25 million.

Most recently on 20 August 2020, Brian and several other people involved in the project were arrested for using the money gathered for the wall for their own personal needs. According to the rumors circulating the internet, Brian spent around $350,000 for himself.

Who is Hailey Grice? Age, Height, Boyfriend, Parents, Net Worth