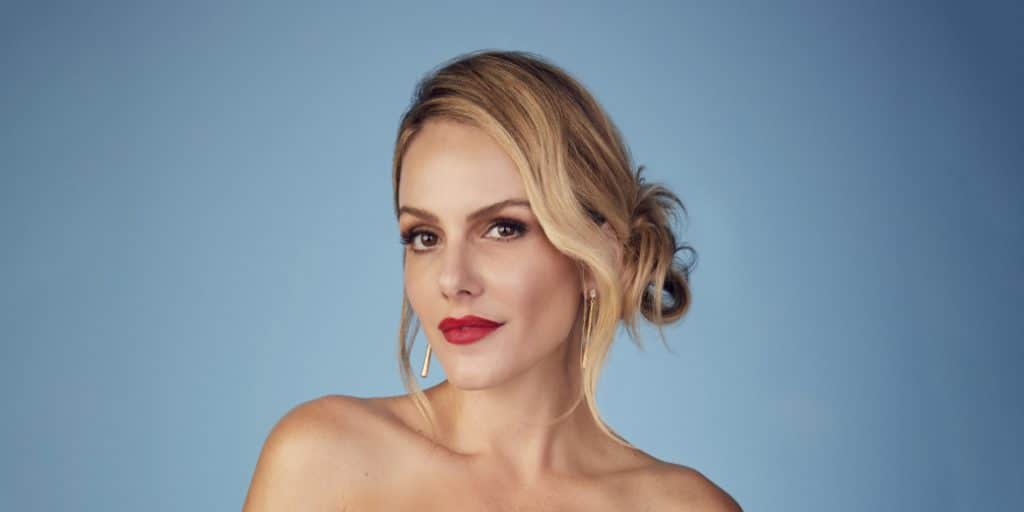 Who is Monet Mazur?

Monet H. Mazur was born in Los Angeles, California USA, on 17 April 1976 – her zodiac sign is Aries and she holds American nationality. She is an actress, musician and a model, who might be known best for her portrayal of Laura Fine-Baker in the sports drama “All American”, created by April Blair and which stars Daniel Ezra, Samantha Logan and Michael Evans Behling. It follows a student of South Central as he transfers to Beverly Hills High School to play football there. The series has been airing since 2018 and has been nominated for four awards, winning one.

Monet was raised alongside her three younger brothers in Los Angeles, by their mother Valerie Chasin who was a model, and their father Ruby Mazur who was an illustrator, and is famous for having created the tongue logo for the British rock band The Rolling Stones.

Monet and her brothers have been given the last names of famous artists: Monet, Matisse, Miro, and Cezanne.

Monet launched her modelling career while attending high school, and appeared in three TV ads for the clothing retail company Gap Inc. She then became interested in acting, and launched her acting career aged 16, with her portrayal of a flirtatious woman in the 1993 fantasy comedy film “Addams Family Values” which was quite popular, winning three awards while it was nominated for 16 others, including an Oscar. In the same year, Monet appeared in her first TV series – the romantic drama “Days of Our Lives” – portraying Brandee Fields in six episodes.

Upon matriculating in 1994, Monet decided to focus on her acting career rather than enroll into college.

Monet gained recognition in 1997, after being cast to portray Mod Girl in the adventure comedy “Austin Powers: International Man of Mystery”, written by Mike Myers who also starred in it alongside Elizabeth Hurley and Michael York. It follows a playboy and secret agent who has been awakened from his cryogenic state after 30 years, to fight Dr. Evil. The movie won three and was nominated for eight other awards.

The year 1999 saw her play Becky Beaner in the action fantasy comedy “Mystery Men”, which starred Ben Stiller, Janeane Garofalo and William H. Macy, and is about several amateur superheroes who have to stop a supervillain from destroying their city and defeating their favorite superhero.

In the same year, Monet played her first lead character, Georgia in the crime thriller drama “The Learning Curve”, written and directed by Eric Schwab, which received mixed reviews. In 2001, she was cast to appear in the hit biographical crime drama “Blow”, which starred the famous actor and actress Johnny Depp and Penelope Cruz, and follows the life of George Jung, who established the American cocaine market in the US in the ‘70s, partnered with the Colombian Medellin cartel; the movie won three and was nominated for nine other awards.

The same year saw Monet appear in the romantic drama “Angel Eyes” which starred Jennifer Lopez, and in 2003 Monet portrayed Lauren in the romantic comedy “Just Married” starring Ashton Kutcher and Brittany Murphy, and which follows a young husband and wife spending their honeymoon in Europe.

In 2006, Monet starred as Anita Pallenberg in the romantic comedy “Whirlygirl” which received mixed reviews, and she also starred in the 2008 romantic comedy “The Last International Playboy”, written and directed by Steve Clark. Her most recent roles in movies have been in the 2009 action crime drama “Dead Man Running” which starred 50 Cent and Clint Koroan, the 2012 mystery horror “Adopting Terror”, and the 2015 drama “Love Is a Four-Letter Word”.

In 1995, Monet portrayed Erica in two episodes of the family drama “Party of Five”, and went on to appear in single episodes of various series, such as the comedy drama “Jack & Jill”, the action crime “CSI: Miami”, and the mystery crime drama “Cold Case”.

She gained recognition in 2009 with her portrayal of Gina Griffin in the crime comedy “Castle”, which follows Richard ‘Rick’ Castle who is writing novels and is now working with the police to catch a serial killer who imitates the plots of his books.

The series won 20 awards and was nominated for 25 others, including four Primetime Emmys. Monet then guest-starred in several series, such as “Chuck”, “Rizzoli & Isles” and “The Good Guys”, before being cast to appear in “All American” for which she is still shooting today.

Monet has appeared in two TV specials: “Young Hollywood Awards” in 2002 and “25th Film Independent Spirit Awards” in 2010. She has guest starred in the shows “Last Call with Carson Daly” and “Fashion News Live”, and can be seen in a single documentary film: the 2019 “No Expectations the Murder of Brian Jones”.

She worked as the associate producer on 10 episodes of the comedy crime series “Snatch”.

Monet began dating Alex De Rakoff around a year before they married, in a private ceremony attended by their closest friends and family in April 2005. On 21 May 2005, she gave birth to their son Marlon, while their second son Luciano Cy De Rakoff followed on 22 March 2011. However, on 7 July 2018, Alex and Monet divorced for unknown reasons.

Alex De Rakoff is a British film writer, producer and director, who is known best for having written the 2004 sports comedy movie “The Calcium Kid”, and the 2009 action crime film “Dead Man Running”.

Monet hasn’t spoken about anyone she might be dating today, however, it’s known that she was in four relationships before meeting Alex. She dated the famous actor Ashton Kutcher in 1995 and 1996, and then started a relationship with famous American guitarist Dave Navarro for around a year, ending it by the end of 1997. In 2001, Monet dated Adrien Brody, an American actor and film producer, and then in 2004, just months before meeting Alex, dated Jason Lewis who is an American fashion model and actor.

As of January 2021, Monet is single, was once married and has two sons.

Monet is interested in music, and is a member of the band Nancy Raygun. She is the cousin of Bret ‘Epic’ Mazur, who is the lead singer of Crazy Town.

Monet has been a sex icon since the launch of her acting career, and has been able to maintain her weight and looks by exercising on a daily basis, and following a strict diet. Although very slim, Monet has never had problems with anorexia but was frightened during her 20s and 30s that it might happen to her one day.

She is a fashionista, and goes shopping for clothes a couple of times each week.

In her spare time, Monet enjoys watching movies starring her favorite actor and actress Tom Hanks and Cate Blanchett, such as “The Terminal”, “Sleepless in Seattle” and “Where’d You Go, Bernadette”.