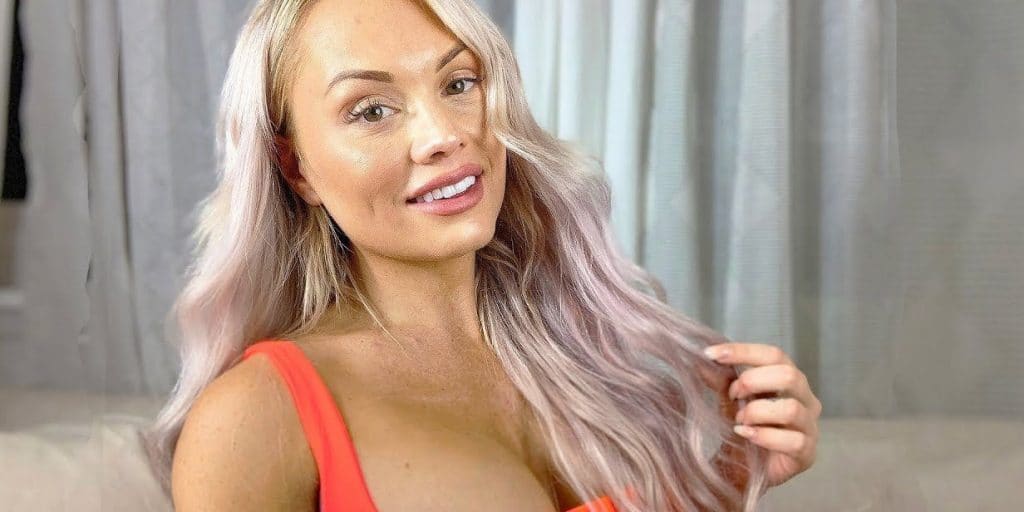 Who is Sophia Turner?

How rich is she, as of now? Sophia Turner Net Worth

As of mid-2021, Sophia Turner’s net worth is estimated at close to $200,000, acquired through her successful career on social media, which includes creating sponsored posts, video monetization, and selling exclusive content. It is assumed that she also enjoys the wealth of her famous husband, Derek Deso, whose fortune is estimated at over $700,000.

The actual date and place of Sophia Turner’s birth haven’t been revealed – according to her posts on social media, it’s only known that she was born in March.

She’s remained silent when it comes to her parents, and it’s unknown whether she has siblings or is an only child. Her nationality and ethnicity aren’t disclosed, and little is known about her early life, including her educational background, about which Sophia hasn’t shared any details.

Prior to becoming a social media phenomenon, Sophia Turner made a name for herself in the beauty business as a hairstylist and lash technician, and became a salon owner. She promoted her business on an Instagram account under the nickname ‘_lashedbysophia’.

Nonetheless, she started pursuing her career on social media when she became romantically involved with YouTube star Derek Deso, who gained popularity for posting various pranks and challenges. So, Sophia eventually began to appear in his videos, and caught the attention of his fans.

Sophia Turner started pursuing her solo career as a content creator, when on 9 July 2019, she launched her official self-titled YouTube channel. Later that month she uploaded her first video, entitled “My Very First Youtube Video (Q&A)”, after which she continued to create various beauty tips and lifestyle videos, ASMR videos, storytellings, Q&As, workouts, and others.

Some of her most popular videos include “ASMR EDIBLE HAIR BRUSH, HAIR TIES, MOCHI (MOST POPULAR FOOD) MUKBANG EATING SHOW”, “MEETING MY DAD FOR THE FIRST TIME…*EMOTIONAL*”, and “Baby Update..”, to name a few.

In addition to her career on YouTube, Sophia Turner has expanded her influence across other social media platforms. She runs her official Instagram account under the username ‘sophiaaturner’, which she uses to promote her projects. She is also active on the video-sharing platform TikTok, where you can find her under the nickname ‘sophiaadeso’. Recently, Sophia started to create exclusive content for adults, such as videos and photos, which she sells through the website Snipfeed.

Sophia Turner has long blonde-dyed hair and dark brown eyes. She is a fitness freak and has a perfectly toned body, but information about her height, weight, vital statistics, bra, dress and shoe sizes isn’t unavailable.

Sophia Turner became romantically involved with Derek Deso in early 2019. After dating for a few months, they took a step further and became engaged, eventually tyiing the knot at an intimate wedding ceremony on 12 September 2020. They even shared a video with their fans, entitled “Derek & Sophia – The Official Deso Wedding”. Derek adopted her son Quincy, from a previous relationship.

Who is her husband? Derek Deso Short Wiki/Bio

Derek Deso was born on 27 April 1987 under the zodiac sign of Taurus, in Los Angeles, California USA. He is a famous content creator, social media influencer, and YouTuber, who started his career alongside three friends on their collaborative comedy channel ‘TheBoogShow’ in August 2010. They filmed various parodies, pranks and challenges, and quickly attracted a huge number of followers.

Two years later he started working on his solo career, and launched his official self-titled YouTube channel, which currently boasts almost two million subscribers and over 330 million views in total. Some of his most viewed videos are “strip Challenge Prank”, “WHAT’S IN THE BOX CHALLENGE – UNDERWATER OCEAN ANIMALS!”, and “How Animals Have Sex”, to name a few.

Besides his main YouTube channel, Derek also runs a second channel called ‘DerekDesoDaily’, on which he mostly posts videos with his wife Sophia. They have garnered more than 2.5 million subscribers, while their videos have been viewed more than 360 million times.

Some of their most popular videos include “Spying On My Girlfriend (WE BROKE UP AFTER THIS VIDEO)”, “HIDDEN CAMERA in my GIRLFRIENDS CAR FOR 24 HOURS (shows her with personal trainer)”, and “EXTREME SPICY NOODLE CHALLENGE!!! $1,000 CASH BET!!! **HOTTEST NOODLES IN THE WORLD!!!!**”, among many others.

Before he started dating Sophia, Derek Deso was in a relationship with YouTube star Lycette Cornejo, and they created content together, but called it quits in May 2017.