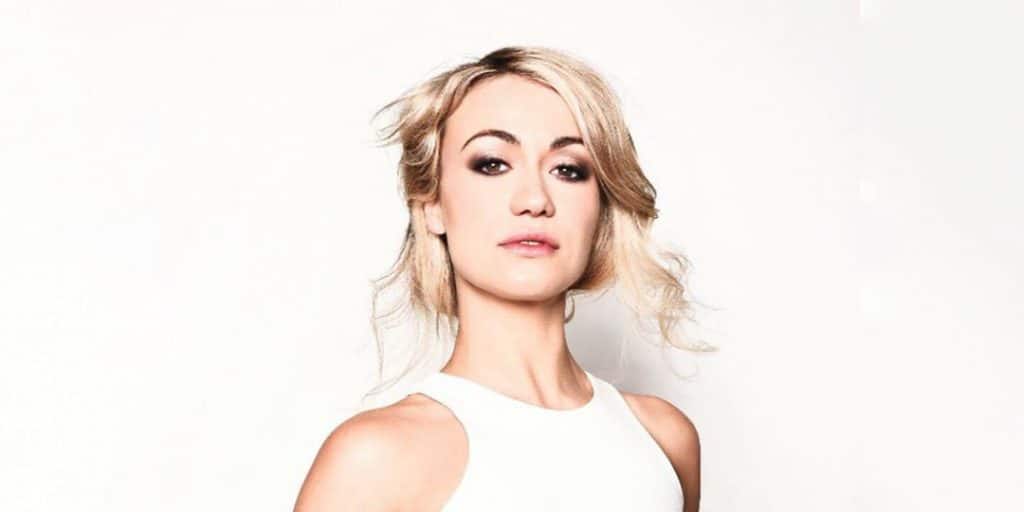 Chelsey Marie Reist was born in Edmonton, Alberta, Canada, on 4 January 1987 – her zodiac sign is Capricorn and she holds Canadian nationality. She is an actress, TV host and a dancer, who is probably known best for her portrayal of Harper McIntyre in the mystery science fiction series “The 100”, created by Jason Rothenberg, and which starred Eliza Taylor, Bob Morley and Marie Avgeropoulos. It follows 100 juvenile delinquents sent back to Earth from a spaceship 97 years after a nuclear war devastated the planet. It aired from 2014 to 2020, while Chelsey left the cast in 2018. The series won nine awards and was nominated for 38 others, including a Primetime Emmy.

Chelsey was raised in Edmonton alongside her sister Jenna and their brother by their parents, but  about whom nothing is known as they prefer to stay away from the media’s attention.

Chelsey grew up being interested in dancing, and started taking lessons aged five. It was while attending high school that she became interested in acting, as she joined the school’s drama club and appeared in various plays, often as a lead character. Upon matriculating in 2005, Chelsey enrolled at Capilano University in North Vancouver, Canada, from which she graduated with a Bachelor of Arts degree in acting in 2009.

Chelsey made her debut film appearance in 2008, when she portrayed Femme Fatal in the short mystery drama “The Key”, and was then seen in several short movies, such as “Static State”, “The Compass” and “In the Key of Evil”.

She appeared in her first feature film in 2012 entitled “Crowsnest”, but which received poor reviews, and the same year saw her portray the supporting character Patty in the romantic comedy “A Bride for Christmas”, which starred Arielle Kebbel, Andrew W. Walker and Kimberley Sustad – it follows a man who has to marry a specific woman by Christmas to win a bet. The following year saw her portray Rachel in the horror “No Tell Motel”, and in 2014, Chelsey appeared as Carla in the romantic comedy “When Sparks Fly”.

In 2016, she was cast to play Alexis Caine in the crime thriller drama “Dark Harvest”, written and directed by James Hutson who also starred in it alongside A.C. Peterson and Cheech Marin. It follows a police officer and a marijuana grower, as they team up to stop a psychopath from raping and killing women; the movie won seven and was nominated for one other award. The year 2017 saw Chelsey portray Amanda in the romantic comedy “Wandering Hearts”, but which failed to attract any attention, and she also starred as XX in the short drama “Not Falling Together”.

Three of Chelsey’s most recent roles in movies have been in the 2019 sports comedy “Benchwarmers 2: Breaking Balls”, the short western “Murphy’s Law” and the romantic drama “The Christmas Ring”, both in 2020.

She has recently been cast to portray Violet Zuerst in the upcoming thriller “Land of Nod”.

Chelsey made her debut TV series appearance in the 2011 episode “Yakuza” of the action crime drama “True Justice”, and the appeared in single episodes of various series, such as the drama “City Lights”, the science fiction action “The Tomorrow People” and the crime mystery “Garage Sale Mysteries”.

2014 saw her portray a beautiful woman in a single episode of the mystery crime comedy “Psych”, which starred James Roday Rodriguez, Timothy Omundson and Dule Hill, and follows a fake psychic who is hired by the police to help them solve crimes – the series won five and was nominated for 31 other awards.

Some of Chelsey’s following roles were in the romantic drama “Cedar Cove”, the drama “Miranda’s Rights” and the science fiction drama “Aftermath”. Her first notable performance after “The 100” was in the 2020 comedy “Flimsy”, in which she starred as Phina alongside Keilani Elizabeth Rose and Grace Dove, but which was cancelled after airing 13 episodes.

Chelsey’s most recent role in a TV series has been in 14 episodes of the science fiction drama “NarcoLeap”, in which she starred alongside Madison Smith and Austin Eckert, and which follows a college student who is capable of leaping into other people’s bodies during narcolepsy. It was nominated for six awards.

Chelsey has a single writing credit: the 2011 episodes “The Underwear Affair Race” and “Taboo Naughty But Nice Show” of the series “City Lights”.

She served as the walla artist for the making of two 2010 movies – “Growing the Big One” and “Amazon Falls”.

Chelsey was a camera operator during the shooting of the 2012 movie “Crowsnest”.

She has appeared in six 2010 episodes of the documentary series “Discovering Great Towns”, and has been invited to make guest appearance in various talk-shows, including “Kingdom Geek”, “Home & Family” and “Noches con Platanito”.

Chelsey has been nominated for a single award: a 2019 Leo Award for Best Performance by a Female in a Web Series for “NarcoLeap”.

Chelsey is more or less secretive when it comes to her love life, and has shared very little concerning her past and present affairs. There are rumors circulating the internet that she was in a relationship with actor Christopher Larkin, who starred alongside her in the series “The 100” playing her boyfriend on-screen, however, both have stated that they are only close friends.

As of February 2021, Chelsey is in a relationship with Mark Milburn, a photographer who is currently working for Peeled Media as a creative director. According to the two’s Instagram accounts, they have been together since 2016, but there are no signs of an engagement. They spend most of their spare time together, including working out and traveling, which they both enjoy.

Chelsey is interested in photography herself, and her boyfriend has taught her some tricks in the past two years. Many of the pictures uploaded onto her Instagram account have been taken by her.

Chelsey was once crazy about parties, but nowadays enjoys staying at home and having a glass of wine by herself.

She enjoys being in nature rather than in overcrowded cities, and has recently gone camping with her boyfriend high up in the mountains.

Besides working out at the gym three to four times each week, Chelsey is also practicing boxing.

She has her own favorite actors and actresses, some of whom are Channing Tatum, Robert De Niro and Angelina Jolie, and a couple of her favorite movies are “Dear John”, “Meet the Parents” and “Mr. and Mrs Smith”.

As of February 2021, her net worth has been estimated at over $1 million.