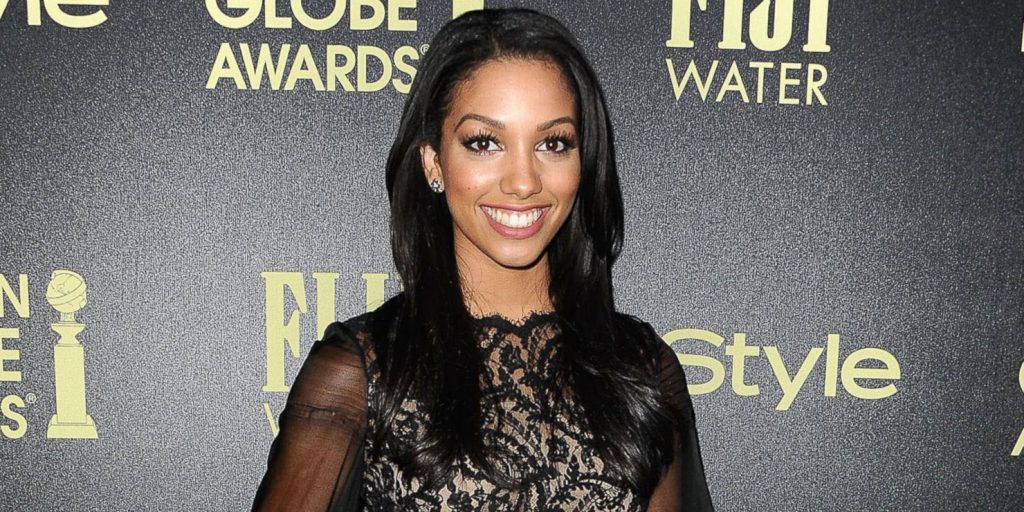 Corinne Marie Bishop was born in Los Angeles, California USA, on 15 February 1994 – her zodiac sign’s Aquarius and she holds American nationality. She’s an actress and a model, but who’s probably known best for being the daughter of the famous American singer-songwriter and actor Jamie Foxx.

Corinne was raised as an only child in Los Angeles by her father and her mother Connie Kline who’s an accountant and a retired US Air Force veteran. Her parents weren’t married, and they split a couple of years after she was born. It was in early 2015 that Corinne adopted her father’s last name, Foxx.

Corinne became interested in acting mostly thanks to her father, as he occasionally took her onto the sets of his movies and TV series. She attended Sierra Canyon High School at which she appeared in various plays, and was physically very active as she ran track, played soccer and danced. Corinne was also a cheerleader, and was in 2011 featured on the cover page of the magazine “American Cheerleader”. Upon matriculating in 2012, she enrolled at the University of Southern California, where she became a member of the sorority Pi Beta Phi. Corrine graduated with a Bachelor’s degree in public relations in 2016, and then practiced acting at both the American Academy of Dramatic Arts, and the Howard Fine Acting Studio.

Corinne made her acting debut in 2013, when she appeared as a dancer in the musical video “Pharrell Williams: Happy”. In 2014, she played a yoga student in the short comedy “The Worst Yoga Teacher Ever”, written and directed by Sasha Wexler, and which starred Patty Costello and Adam Dorsey.

In 2016, she made her debut TV series appearance with her portrayal of Rachel Abrams in the episode “All Eyez on Me” of the action crime comedy “Sweet/Vicious”, which starred Eliza Bennett, Taylor Dearden and Brandon Mychal Smith, and follows Ophelia and Jules as they’re punishing those who are abusing their peers on the college campus.

We spoke with actress @corinnefoxx about her role in the Disney+ original film 'Safety', her journey to pursuing acting, and the best advice she's received from her father Jamie Foxx. https://t.co/huzXE4PKzI

The year 2019 saw Corinne play her first lead character, Sasha in the adventure horror movie “47 Meters Down: Uncaged”, which follows two sisters in an underwater labyrinth while being chased by deadly sharks.

Corrine’s most recent appearance has been her portrayal of Kaycee Stone in the 2020 biographical sports drama “Safety”, written by Randy McKinnon and Nick Santora, directed by Reginald Hudlin, and which starred Jay Reeves, Thaddeus J. Mixson and Javien Jackson. It’s about Ray-Ray McElrathbey who played football for Clemson University, and secretly raised his younger brother on campus. The movie was nominated for two awards.

She was six years old when she appeared in her father’s “The Jamie Foxx Show”.

Corinne has been invited to make a guest appearance in various talk-shows, such as “Good Morning America”, “Entertainment Tonight” and “Made in Hollywood”.

Corinne launched her modelling career in November 2014 at the Bal des Debutantes, and then went on to pose for various popular brands such as Ralph Lauren, Kenneth Cole and Dolce & Gabbana. In 2016, she walked the catwalk for the first time at New York Fashion Week wearing Kanye West’s new line Yeezy. In September 2017, Corinne walked the catwalk at New York Fashion Week again, this time for the American businesswoman and fashion designer Sherri Hill.

Corinne has allegedly learnt from her father to keep details of her love life away from media attention, however, she’s been spotted on many occasions spending time with and kissing her boyfriend Austin Lantero.

Austin holds a Bachelor’s degree in business and cinematic arts program from the University of Southern California, which he obtained in 2016. He has been employed by various companies since 2014, such as The Third Floor, Inc., the NBCUniversal Media, LLC and The Walt Disney Company. Since August 2020, Austin’s been working as the manager at Range Media Partners.

Corinne hasn’t spoken about any other boys she has perhaps been with, and as of March 2021, she’s dating Austin Lantero, hasn’t married and doesn’t have children.

Corinne’s interested in motivating women to chase their dreams, launch their own businesses and be their own bosses. She launched the lifestyle website and marketplace Foxxtales in 2017, which has recently been turned into a production company.

Corinne’s a huge fan of podcasts, and has recently launched her own entitled “Am I Doing This Right”.

She has criticized Donald Trump for the actions he took while being President of the United States, and in the 2020 presidential election Corinne voted for Joe Biden, also urging her fans on the internet to do the same.

She has been keen on travelling since her early teenage years, as that’s when Jamie began taking her with him to his red carpet events. Corinne has been to many US states, and is hoping to one day visit Paris in France (Europe).

In her spare time, she enjoys watching movies starring her favorite actor and actress Leonardo DiCaprio and Anne Hathaway, such as “Titanic”, “Inception” and “One Day”.

Who is her father Jamie Foxx?

Eric Marlon Bishop, better known by his professional name Jamie Foxx, was born in Terrell, Texas USA, on 13 December 1967 – his zodiac sign’s Sagittarius and he holds American nationality. He’s perhaps still known best for having portrayed the title character Ray Charles in the 2004 biographical musical movie “Ray”, written and directed by Taylor Hackford, and which follows the life of the blues and rhythm musician Ray Charles; he was seven when he went blind, while he became popular in the ‘50s and ‘60s.

The movie won 53 awards including two Oscars, and was nominated for 54 other awards – Jamie won the BAFTA Award for Best Actor in a Leading Role, and an Oscar for Best Actor.

Jamie was raised in Terrell by his adoptive parents Mark Taller, who was a yard worker, and Estelle Marie who was a nursery operator. His biological mother Louise Annette Talley Dixon was a housewife, while his father Darrell Bishop was a stockbroker who eventually converted to Islam and changed his name to Shahid Abdula. Jamie was five when he started to play the piano, and he began telling jokes at an early age. He studied at Terrell High School at which he played both football and basketball, while he was also amongst the best students.

Jamie hoped to play for the Dallas Cowboys, but was also interested in music, and a member of the band Leather and Lace. Upon matriculating in 1985, he was offered a scholarship from the US International University, from which he graduated with a Bachelor of Arts degree in performing arts in 1989.

His career was launched in the same year after he performed at a comedy club’s open mic night. He made his debut TV series appearance in the 1991 comedy sketch “In Living Color”, and Jamie’s debut film appearance was in the 1992 fantasy comedy “Toys”. In 1999 he starred alongside Al Pacino and Cameron Diaz in the sports drama “Any Given Sunday”. From 1996 to 2001, he ran his own “Jamie Foxx Show”, and then starred alongside Will Smith in the biographical sports movie “Ali”.

In 2004, James was nominated for an Oscar for Best Supporting Actor for his performance in the action thriller movie “Collateral”. In September 2007, he received his own star on the Hollywood Walk of Fame, and went on to star in the 2009 drama movie “The Soloist”, the 2009 action thriller “Law Abiding Citizen”, and the hit 2012 revisionist western movie “Django Unchained”, written and directed by Quentin Tarantino.

In 2013, he starred alongside Channing Tatum in the action movie “White House Down”, and the following year saw him star as the villain Electro in the superhero movie “The Amazing Spider-Man 2”. Most recently in December 2020, James voiced the lead character in the animated fantasy comedy movie “Soul”.

Jamie’s also a noted musician, and released his debut studio album “Peep This” in 1994, while his second album “Unpredictable” followed in 2005. His three other albums are “Intuition” released in 2008, “Best Night of My Life” which came out in 2010, and “Hollywood: A Story of a Dozen Roses” released in 2015. His most popular album was “Unpredictable” as it topped the US charts, has been certified platinum twice, and sold over two million copies in the US to this day.

After splitting from Corinne’s mother, Jamie dated Kristin Grannis, and she gave birth to their daughter Anelise in 2009. In 2013, he began dating the popular actress and producer Kate Noelle Holmes and they then became engaged, however, the two split for unknown reasons in 2019.