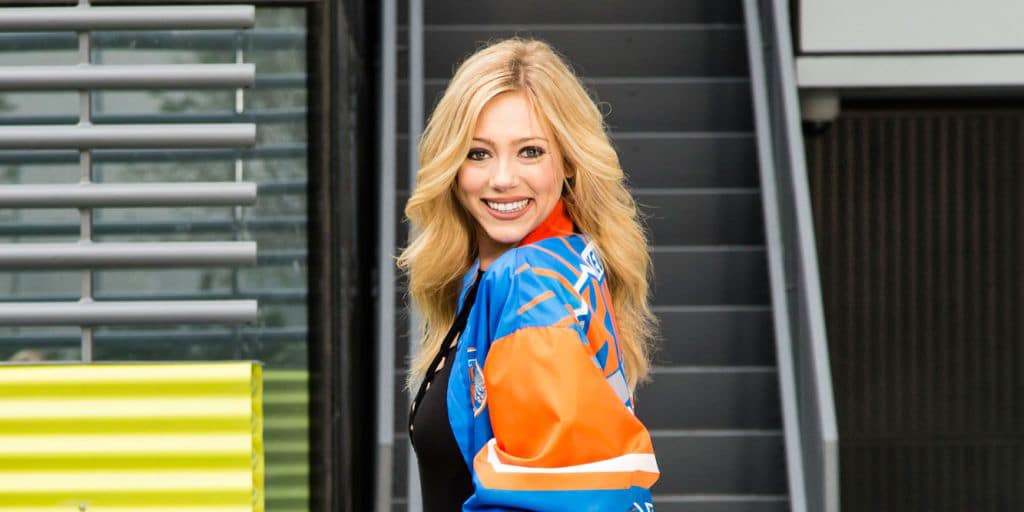 Who is Abby Hornacek?

Abby Hornacek was born in Salt Lake City, Utah USA, on 25 April 1994 – her zodiac sign is Taurus and she holds American nationality. She’s a reporter and a TV show host, but who’s probably known best for being the daughter of Jeff Hornacek, a famous former professional basketball player and a coach in the National Basketball Association (NBA).

Abby was raised in the US alongside her older brothers Ryan and Tyler, born in 1989 and 1990, respectively, by their father and their mother Stacy. Her brothers prefer to be left out of media.

Motivated and encouraged by her father, Abby became interested in sports at a very early age, and excelled at volleyball.

She was amongst the best volleyball players at her high school, and upon matriculating in 2012, Abby enrolled at the University of Southern California and in 2014, she entered the Miss Arizona beauty pageant, finishing third.

During her time at college, Abby was a member of the Lambda Pi Eta, Gamma Sigma Alpha, USC Phi Sigma Theta, the Order of Omega, and Kappa Kappa Gamma sororities. She graduated in 2015 with a Bachelor of Arts degree in broadcast journalism.

Abby worked various jobs after enrolling at the college, and from 2014 to 2016 was a production intern, feature reporter and later a co-host at Fox Sports San Diego.

She also worked at Stadium as their TV host and reporter, and for National Basketball Association (NBA) as a Summer League correspondent and a sports reporter. Abby also worked at Annenberg TV News as their anchor and producer.

In 2018, she joined the show “PARK’D” as its host, airing on Fox Nation. She also began hosting other channel shows, such as “Ride to Work” and “American Arenas”.

In the show “PARK’D”, Abby can be seen taking her viewers around the US national parks, showing them the most beautiful of US nature and animals. In “Ride to Work”, she interviews people employed at Fox News and Fox Nation, and also drives them to work.

In 2019, she could’ve been seen hosting the Fox Nation Patriot Awards event.

Abby’s amongst the most secretive of TV hosts and reporters, as she hasn’t spoken of any men or women whom she has perhaps been with, which is why there are various rumors circulating the internet concerning her sexual orientation, and the people whom she has perhaps dated.

Many people believe Abby to be a lesbian, which is the reason why she hasn’t spoken of any men whom she’s dated. There are also two people who have claimed to have seen Abby being rather too close to a female friend at a party in Los Angeles, California, but this hasn’t been confirmed, nor has Abby commented on this.

There are those who claim that Abby’s today in a relationship with a mysterious man, and that the two have decided to keep their relationship away from the media’s attention, but no proof has been provided to support these claims.

As of May 2021, Abby appears to be single, hasn’t married and doesn’t have children.

Abby’s physically highly active, as she has four to five training sessions at the gym each week, takes part in various activities such as mountain biking, playing tennis and soccer with her friends, while she’s also following a strict diet.

She’s a lover of all animals; when she was in her early teenage years, Abby dreamed about becoming a marine biologist.

She’s keen on listening to music in her spare time – her favorite genre is country, while her favorite singer is Johnny Cash. Abby plays the banjo.

She likes to watch NBA games, and her favorite player is Giannis Antetokoumnpo playing for the Milwaukee Bucks.

In her spare time, she likes to watch movies starring her favorite actor and actress Tom Hanks and Amanda Seyfried, such as “Sleepless in Seattle”, “Dear John” and “Letters to Juliette”.

Who is her father, Jeff Hornacek?

Jeffrey John Hornacek was born in Elmhurst, Illinois USA, on 3 May 1963 – his zodiac sign is Taurus and he holds American nationality. He’s probably known best for having served as the head coach of both the New York Knicks and the Phoenix Suns competing in the NBA.

Jeff studied at Komarek Elementary school before moving on to Gurrie Middle School and then to Lyons Township High School, at which he started to play basketball, and was amongst the school’s best players.

Upon matriculating in 1982, he enrolled at Iowa State University, and graduated with a Bachelor’s degree in 1986.

Jeff was drafted in 1986 by the Phoenix Suns, and was in 1992 traded to the Philadelphia 76ers and then in 1993 to the Utah Jazz. In 2000, Jeff faced knee problems and had to retire from playing the sport.

In 2007, he began working as the Utah Jazz’s special assistant coach, and in February 2011 became their full assistant coach. In 2013, both the Phoenix Suns and the Philadelphia 76ers wanted Jeff as their head coach, while the Charlotte Bobcats also showed interest.

In December of the same year, he was presented with the NBA Coach of the Month Award. He then chose to be the head coach of the Phoenix Suns, but was fired on 1 February 2016, then joined the New York Knicks as their head coach. Jeff was fired on 12 April 2018, and on 30 November 2020, he was hired to work as an assistant coach of the Houston Rockets.

His success is reflected in his net worth, as of mid-2021 estimated at close to $12 million

Inside Lindsie Chrisley And Will Campbell Relationship