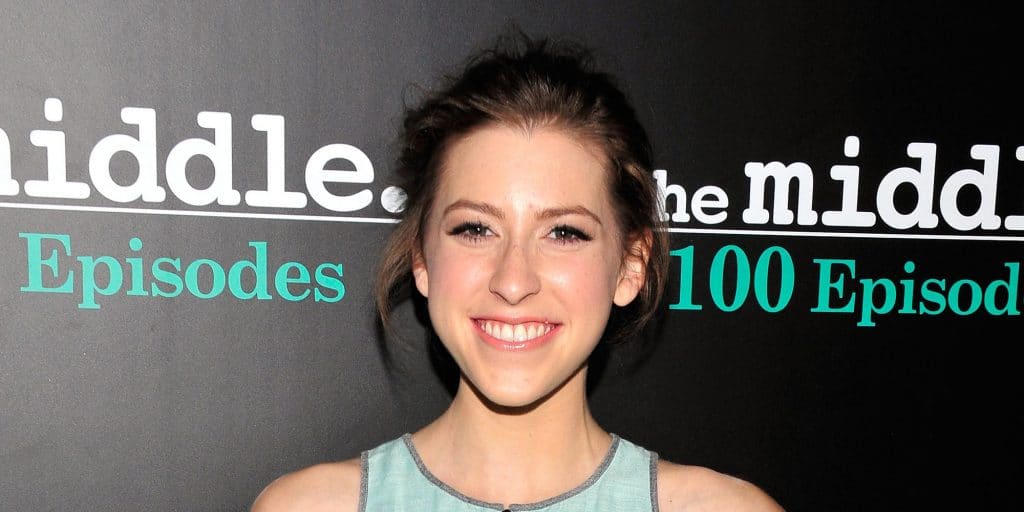 Who is Eden Sher married to? Husband, Net Worth, Biography

Eden Rebecca Sher was born in Los Angeles, California USA, on 26 December 1991 – her zodiac sign is Capricorn, and she holds American nationality. She’s an actress, who’s perhaps known best for her portrayal of Sue Heck in the comedy series “The Middle”, created by Eileen Heisler and DeAnn Heline, and which starred Neil Flynn, Patricia Heaton and Charlie McDermott. It follows the lives of a married woman and her family, the series aired from 2009 to 2018, and won 14 of the 52 awards for which it was nominated, including a Primetime Emmy nomination.

Eden was raised in Los Angeles alongside her two brothers, by their mother who’s a school teacher.

She hasn’t shared any details concerning her father, and it’s believed that he abandoned the family when Eden was two years old.

She was seven when she became interested in acting, and was eight when she appeared in her first school play. Eden could’ve been seen performing with her elementary school’s chorus, and after appearing in an episode of the talk-show “The Tonight Show with Jay Leno”, she realized that she wanted to become an actress.

It follows a woman who has lost her husband, and has turned to selling marijuana to make money; the series aired from 2005 to 2012 and won 17 awards, including two Primetime Emmys, while it was nominated for 99 other awards.

Eden attended a local high school in Los Angeles, and upon matriculating in 2010, she didn’t enroll at college, but remained focused on acting.

In 2007, Eden made a guest appearance as Jane, in the episode “The Dream Lover” of the romantic comedy “The O. C.”, and the same year saw her play Carrie Fenton, in the comedy drama “Sons & Daughters”.

In the following years she appeared in an episode or two of various series, including the science fiction comedy “The Middleman”, the romantic family comedy “Sonny with a Chance”, and the comedy “Stalker Chronicles”.

Between 2015 and 2019, Eden voiced Star Butterfly, one of the lead characters in the animated action adventure “Star vs. the Forces of Evil”, created by Daron Nefcy and David Wasson, and which also starred Adam McArthur and Grey Griffin. The series follows Star Butterfly who has come to Earth to live with the Diazes family, while she’s both attending school and protecting the universe from villains; it won five of the 18 awards for which it was nominated.

Most recently, in 2019 Eden portrayed PJ in three episodes of the hit comedy “Jane the Virgin”. Created by Jennie Snyder Urman, it starred Gina Rodriguez and Andrea Navedo, and follows a Catholic woman who has found out that she has been artificially inseminated by mistake. The series aired from 2014 to 2019, and won 21 of the 94 awards for which it was nominated, including two Primetime Emmy nominations.

In 2014, Eden portrayed Penny, in the hit mystery crime drama “Veronica Mars”, written and directed by Rob Thomas, and which starred Kristen Bell, Nason Dohring and Enrico Colantoni. It follows Veronica, who has returned to her hometown to help her old crush Logan Echolls, as he’s been involved in a murder. The movie was nominated for six awards.

In 2015, Eden played a drunk girl in the comedy “ImagiGARY”, and the following year saw her portray Amy in the romantic comedy “Temps”. In 2017, she starred in the popular comedy “The Outcasts”, directed by Peter Hutchings, and which also starred Victoria Justice and Ashley Rickards. The film follows the outcasts of a high school, who’ve united to have their revenge on the school’s most popular teenagers.

Eden’s two most recent roles in movies have been in the 2018 comedy “Step Sisters”, and the 2018 family comedy “Sue Sue in the City”; she’s currently shooting for the upcoming action comedy “The Heart”.

In 2014, Eden wrote, produced and directed the short comedy movie “The Suitcase”, and the following year saw her produce the comedy movie “ImagiGARY”.

Eden has made a guest appearance in numerous talk-shows, including “The Talk”, “Home & Family”, and “Good Morning America”.

She has won four of the eight Behind the Voice Actors Awards for which she has been nominated, all for her performance in the animated series “Star vs. the Forces of Evil”. She has been nominated for five Critics Choice Television Awards for her performance in the series “The Middle”, winning in 2013 for Best Supporting Actress in a Comedy Series.

Eden had kept her love life away from the media’s attention until March 2019, when she revealed that she was engaged to Nick Cron-Devico, a film writer who’s probably known best for having written 10 episodes of the short animated adventure series “Robot Chicken”.

The two married on 12 July 2020, in a private ceremony attended by their closest friends and family members.

Just recently, on 27 June 2021, Eden announced that she’s pregnant, and is expecting twins.

Neither Eden nor Nick have spoken of any other people whom they have perhaps been with, so as of July 2021, Eden’s married to Nick Cron-Devico, and they are expecting twins.

Eden’s main hobby is writing, and she has been convinced by her husband to publish her book “The Emotionary”.

She’s a huge dog-lover, and her pet dog Peanut can be seen featured in some of her Instagram pictures; Eden’s quite active on the network, as she enjoys the attention she’s receiving from her 200,000 followers.

She’s a philanthropist and a fighter for equal human rights. Eden supports the movement Black Lives Matter, and has walked several peaceful protests organized around the USA.

She has her own favorite actors and actresses, some of whom are Jim Carrey, the late Robin Williams and Natalie Portman, and a couple of her favorite movies are “Bruce Almighty”, “Patch Adams”, and “Leon: The Professional”.

Eden’s physically active, and has two to three training sessions at the gym every week; she’s also taking good care of her mental health, as she does yoga and meditates on a daily basis.