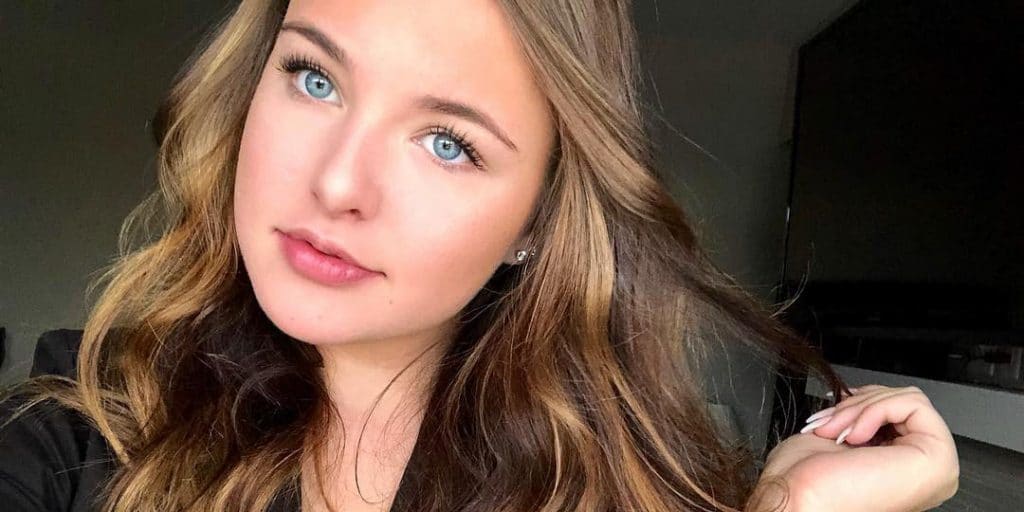 Kendra Rowe is a Canadian YouTuber and social media personality, who is known for producing beauty, fashion and lifestyle videos on YouTube. Her ‘Try On’ videos which always go viral, has brought her a lot of adoring fans, and placed her in the limelight.

To find out all you need to know about Kendra Rowe, keep reading this biography..

Kendra Rowe was born on 18 January 2000 under the zodiac sign of Capricorn, in Calgary, Alberta Canada. She is of White Caucasian ethnicity, and she holds Canadian nationality.

She and her younger brother were raised in the same neighborhood by their parents. As a child, Kendra was a dancer, and trained in ballet, jazz, hiphop, contemporary dance, etc. In fact, she participated in various dance competitions for about nine years.

There are no specific details on her family or schools she attended, but upon matriculation from high school, she enrolled at a college in Canada, but struggled with her major courses for the first year, so took time off school, with hopes of returning to college in a few years, or not.

Kendra always loved creating content for YouTube, but never got around to it, until an agency gave her a platform. Thus, she started her career on a channel which was managed by a third-party. It was by her consistent appearance on the channel that she was able to build an audience and a loyal fanbase. However, Kendra didn’t have the freedom to create, nor access to interact with her fans.

In 2019, she parted ways with the agency, and went on to launch her own YouTube channel, named after herself for easy identification.

Some of Kendra’s first videos on her independent channel are “Why I Have a New Channel”, “Brandy Melville Try On Haul: Did You Miss Me?”, “I Spent $500 on Princess Polly: Try On Haul”, and “Addressing My Lips???”, all from 2019. She usually uploads content twice a week, to keep her subscribers entertained.

Some viral videos from Kendra’s YouTube channel include “Floralkini Try On: Summer Bikini Haul” (2019), “Huge BlackBough Swimwear Haul” and “$1300 Vitae Review and Try On Haul”, both in 2020, and totalling 7.9 million, 5.3 million and 4.6 million views respectively.

Currently, Kendra Rowe’s YouTube channel has over 410,000 subscribers, and close to 100 videos uploaded; her total view count has surpassed 54 million. Her most popular are her ‘Try On’ videos, in which she models various outfits from popular brands.

In an interview with FYIG, Kendra revealed that her favorite part about having an independent channel is the ability to engage with her fans on a personal level. So unsurprisingly Kendra rarely collaborates with other YouTubers, and prefers to feature just her friends in her content.

Kendra’s popularity on YouTube has gained her a lot of followers on her other social media pages; she’s achieved a sort of celebrity status among the Gen Z age grade.

On Instagram, which is the social media platform she uses the most, and she has almost 170,000 followers, Kendra Rowe posts content related to beauty and lifestyle. On her personal Instagram page – @kendraarowe – she shares picture and video content about her trips all over the world.

She also collaborates with fashion brands such as Fashion nova, Adam & Eve, Brandy Melville and Polly, to create sponsored ads, which in turn convince her audience to make purchases from such brands.

On TikTok, she uploads quirky videos to entertain her fans, and has 135,000 followers, and over 560,000 total likes on her page, @kendraarowe.

She also has an exclusive website – kendrarowe.com – on which she sells merchandise to her fans, and shows off exclusive pictures which are only available to paid members on the site.

She earns additional income through Patreon, which is a subscription-based platform.

The 21-year-old YouTuber had a lip filler when she was 19, and visits a doctor regularly for maintenance. Her personal philosophy is taking life one day at a time, although she refers to procrastination as her bad habit.

Kendra Rowe prefers to keep her romantic interests private. She often says she wants her relationship status to be a surprise to her fans. However, she has a best friend, Becca Caleb who she sometimes features on her YouTube channel.

In mid-2021, she moved to Los Angeles, California USA, and hopes to live there for a few years.

Kendra Rowe is 5ft 5ins (1.65m) tall and weighs about 136lbs (62kgs). She has long natural hair which is dark brown in color, with a pair of blue eyes. However, she likes to switch up her hair color, often alternating between black, blonde and brown.

Kendra has an attractive figure, which makes her appealing to a lot of people, and which she loves to flaunt on social media. As per her clothing style, Kendra Rowe likes dressing seductively – in bikinis and body con dresses. In some cases, she dresses up like a typical Gen Z, in baggy pants and crop tops.

Kendra Rowe’s transition from a third-party YouTube channel, to creating a solo channel with millions of views means that she has possibly earned a substantial income over the years.

Details of any property owned by Kendra Rowe is currently unavailable. We will ensure to update this information once there is a change in the situation.